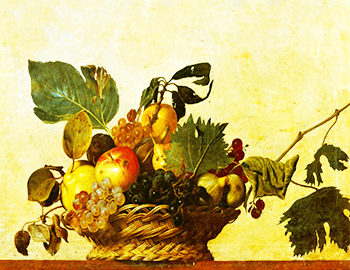 The wads of banknotes that you carry around and so often spend are miniature versions of art treasures! Have you ever noticed what beauties they depict? Though the banknote designs in themselves are a work of art, they also sport some famous masterpiece paintings on them. Painting is an art which enables us to find and lose ourselves in it at the same time! It is such a beautiful depiction of complex human emotions, the nature and the unthinkable abstract. Going to the art galleries in the faraway lands cannot be feasible for all…but you can behold some of these beauties in your currency notes! Let’s embark on a journey that will reveal the unseen and the hidden art on banknotes… 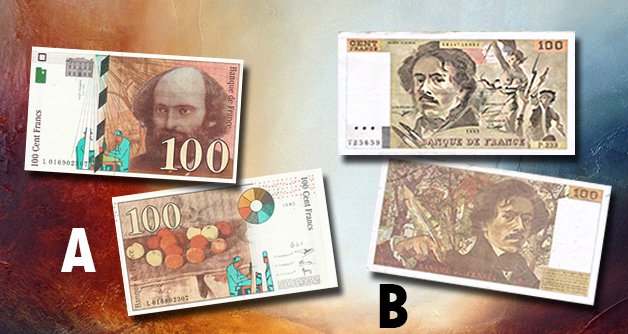 a) 100 French Francs (1997): This deep brown, orange and green note has the famous French painter Paul Cezanne on its obverse. Paul Cezanne was a preeminent painter of Post-Impressionist era. Known as the “Master of Aix”, Cezanne is credited with introducing the emergence of twentieth-century modernism or abstract art.
One of his famous painting “Apples and Biscuits” is depicted on the reverse. This painting is one of Cezanne’s most stunning masterpieces and symbolizes his great mastery of still life painting. This painting of 1880 hangs today in Musée de l’Orangerie in Paris, France.

b) 100 French Francs (1978): This 100 Francs note of 1978 shown in the image has another famous French painter Eugene Delacroix and his famous paintings. The obverse sports this French Romantic painter’s self-portrait along with his very famous painting of “Liberty leading people”. This painting commemorates the July Revolution of 1830, which toppled King Charles X of France.
The reverse has the same self-portrait of Delacroix holding a quill pen and writing his famous diary set against the background of “Place de Furstenberg” a famous and one of the most charming squares in Paris, where Delacroix worked and lived at 6 Rue de Furstenberg while he was commissioned to paint murals for nearby St. Sulpice.

a) 5 Marks Germany: A 5 mark note issued in Germany from 1960 to 1990 depicts a beautiful “Portrait of a Young Venetian Woman” painted in 1505 by Albrecht Durer on its obverse. Albrecht Durer was a painter, printmaker and theorist of the German Renaissance. He established his reputation and influence across Europe due to his high-quality woodcut prints. His watercolour paintings also mark him as one of the first European landscape artists.
“Portrait of a Young Venetian Woman” which decorates this 5 mark currency note hangs in Kunsthistorisches Museum Vienna today. This painting is a small bust-length oil on elm panel painting, executed along with a number of other high-society portraits by the artist in 1505. Painted in the autumn or in the winter, this painting emanates an extraordinary charm in the hues of brown and gold. The reverse of the note depicts an oak sprig in the centre.

b) 100,000 Lires Italy: Michelangelo Merisi de Caravaggio, a famous Italian painter’s paintings adorn the 100000 lire banknote of Italy of 1983 and 1994 series. Caravaggio’s technique was as spontaneous and he painted right into the canvas with minimal preparation. He made his paintings appear to be an extension of real space, deliberately making the viewers to feel as if they are taking part in the scene. Sounds like 3D, doesn’t it? His paintings combined the realistic observation of the human state, both physical and emotional with the dramatic use of lighting.
This note sports the portrait of Caravaggio on the obverse along with his famous painting of the “Fortune Teller”. The reverse has his “Fruit basket” with a castle in the background. 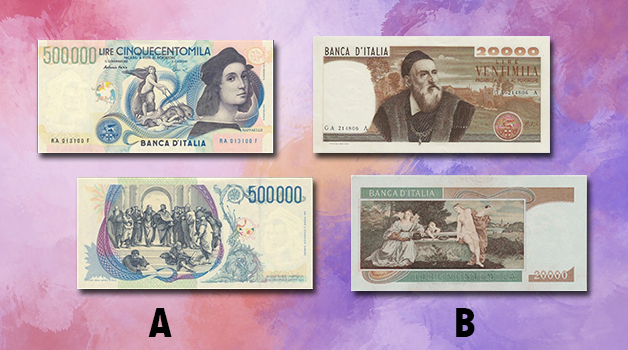 a) 500,000 lire (Italy): A vibrant and colourful banknote from Italy in circulation in 1997 has one of the famous fresco “The Triumph of Galatea” depicted on the obverse along with the artist Raphael. Raffaello Sanzio da Urbino was an Italian painter and architect of the High Renaissance. He is one of the traditional trinity of great masters along with Michelangelo and Leonardo Da Vinci. Many of his works are found in the Vatican Palace.
His best-known work “The School of Athens” which is in the Vatican Stanza Della Segnatura is depicted on the reverse of this note. It was painted between 1509 and 1511 in Apostolic Palace in the Vatican. The School of Athens is one of a group of four main frescoes that depict distinct branches of knowledge. The fresco has all the major philosophers and thinkers from Plato, Aristotle, and Socrates to Pythagoras and Ptolemy. Considered to be one of the masterpieces of Vatican this fresco has decorated this banknote too and indeed increased its beauty.

b) 20,000 Lire (Italy): A 1975 20000 Lire banknote from Italy features yet another master along with his famous masterpieces! The obverse of this green, brown and red note depicts Tiziano Vecelli or Tiziano Vecellio (Titan in English), a 16th-century Venetian school Italian painter. Titian was one of the most versatile of Italian painters. The note depicts his self-portrait along with a landscape from one of his frescos in the background.
The reverse depicts Titian’s “Sacred and Profane Love” also called “Venus and the Bride” which is an oil painting by Titian, painted circa 1514 from Galleria Borghese, Rome. 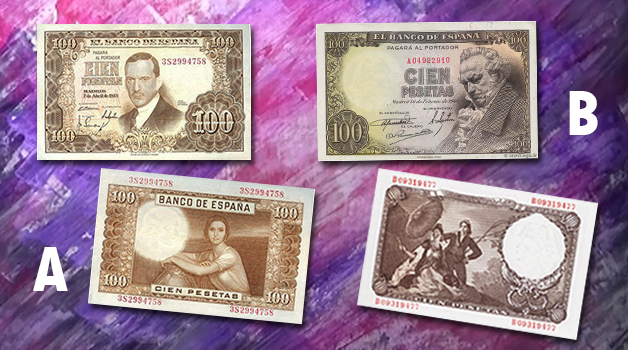 a) 1953, 100 Pesetas (Spain): This beautiful note in the hues of brown has a famous Spanish Painter, Juan Romero de Torres on its obverse. Born in the family blessed with artists, Juan Romero de Torres took interest in painting and art from a very young age. He painted different styles of art together and mostly painted in the Symbolist style. He was particularly famous for his erotic paintings of naked women.
The reverse of the note depicts one of his paintings ‘La Fuensanta’. This portrait painting depicts one of Torres’ models who is depicted with her arms resting on a copper cauldron. The painting was made in the autumn of 1929. This painting is rarely seen since it was completed. Recently in November 2007, this painting was bought by a private collector for a price of 1,173,400 Euros!

a) 1946, 100 Pesetas (Spain): One of a painting from the tapestry cartoon series painted by a famous Francisco Goya ‘The Sun Shade’ or ‘The Parasol’ adorns this 100 Pesetas banknote from 1946. Francisco, depicted on the obverse of the note, was an important romantic painter, printmaker and a Spanish artist of late 18th and early 19th centuries. Often regarded as the last of the Old masters and first of the modernist.
‘The Parasol’ which is depicted on the reverse is one of a cartoon series of oil on linen paintings. It was specifically made in order to be hung on the walls of the Royal Palace of El Pardo in Madrid, Spain.

“What is life if full of care, we have no time to stand and stare” Indeed instead of just spending the money, just for once let’s appreciate the beauty of their designs. Isn’t it interesting! Check out if you have such intriguing banknotes in your pockets. If you find any let us know!