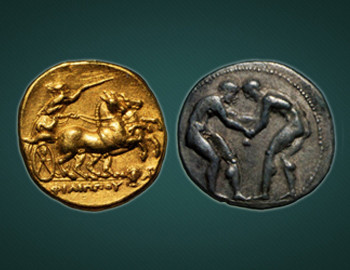 Another Olympiad has passed by! As the world waits in anticipation for the burning torch to be passed on to the Rio 2016 Olympics, we would like you to take a look at some stunning Olympic coins, stamps and notes to get a feel of this mammoth sporting event. Today is International Olympics Day, and it wouldn’t have been a more appropriate time to do just that. But first, let’s take a sneak peek into when and how this sporting event took shape.

It is believed that the first Olympic event was hosted in Greece in 776 BC on the first full moon after the summer solstice, in July or August. Various competitions were organized between athletes belonging to different city-states to honour Zeus, who was considered to have a mythological origin. Like the modern day event, Olympics was held in every 4 years even when Greece was ruled by Romans. Emperor Theodosius I put an end to these games to impose Christianity as the state religion. An Olympic Truce was agreed upon so that athletes could travel from their respective countries to take part in the games safely. Olive leaf wreaths or crowns were awarded to winners. The event was not just held for fun but had several political implications, featured religious celebrations and artistic competitions, the statue of Zeus at Olympia being one of these magnificent creations.

International Olympic Committee (IOC) was founded by Baron Pierre de Coubertin in 1894. The symbol comprising of five entangled rings in colours blue, yellow, black, green, and red on a white field, known as the “Olympic rings”, was designed by him in 1912. Panathenaic stadium in Athens hosted the first modern Olympic Games in 1896. The tradition of thousands of athletes from all over the world competing with each other began once again. The 1914, 1940 and 1944 games were called off due to the World Wars. Over the years, Olympics evolved to include Summer and Winter Games, Paralympics Games and Youth Olympics as well.

On 23rd June 1948, The International Olympic Day was observed to commemorate the inception of the modern Olympic Games. The idea behind celebrating a day like this was to encourage everyone in the world to participate and indulge in sports irrespective of age, gender or athletic ability.

Ancient Greek coins generally depicted Gods or Emperors on the obverse but the reverse designs varied a lot. Since Olympic Games grew in scale and popularity over the years, illustrations of some of the events were depicted on these coins.

Initially, the Games consisted of just one stadium race which measured 19,228 m. Hoplite race or hoplitodromos was a 2-4 stadium race where the athletes competed wearing a complete copper armour. The discus throw event was also very similar to the ones that are held today. Wrestling was one of the most ancient events. It was performed inside the stadium in a special square shaped sandpit. Upright Wrestling or Orthia Pale was where the winner had to bring his opponent to the ground three times. Ground Wrestling or Kato Pale, continued until one of the wrestlers accepted defeat. Chariot races and horse riding were other events that took place during ancient Olympics.

Often the name of the game is mentioned after the name of the city on ancient Olympic coins. Some of them also depict athletes, during the sortition, or when they were crowned.

Crowns, palm branches, amphoras, apples, tripods and even bags with money were offered to winners.

Below is the list of some examples of ancient Olympic coins.

370 BC Silver coin from Aspendos depicts two wrestlers in action.

479 BC Dekadrachma from Syracuse showcases a four-horse chariot and the flying victory goddess Nike.

In 320 BC, the Macedonian king Philip was honoured with this coin after winning a two-horse chariot race. 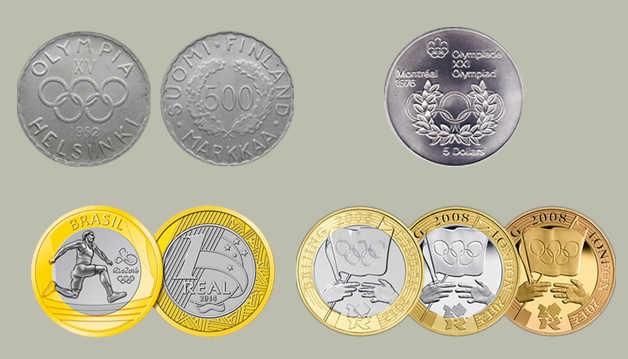 Though the spirit of Olympics has not changed much, it is now not as intense as it was earlier. Several commemorative coins have been issued by different countries all over the world depicting various sporting events that are conducted during the games. The 1952 Summer Olympics was held in Helsinki, Finland and a special coin was released to mark this event. The 1976 Montreal Olympics was also celebrated on a special Canadian 5 Dollar Coin, featuring the official logo of Olympics. The 2008 Olympics Handover from Beijing to London was celebrated with a 2 pound bimetallic coin release. Brazil has also released a set of commemorative coins featuring athletes taking part in different events as we march closer to 2016 Rio Olympics. 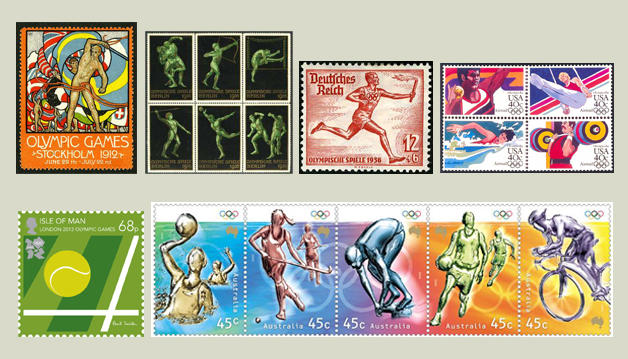 A more colourful and artistic depiction of Olympic Games can be witnessed on stamps. Right from the Multi-coloured 1912, Stockholm Olympic stamps of Sweden to the Berlin 1916 set-tenant set featuring various events like wrestling, archery, high jump and shot put, each one of them has a distinct beauty of its own. In 1936, Germany hosted Olympics again and a beautiful stamp was released featuring an athlete bursting ahead with the Olympic torch in his hand. The 1984 Olympics was held in the USA and a lovely set of 4 stamps were issued with a colourful depiction of a gymnast, swimmer, weightlifter and a shot putter. Apart from track and field events, games like tennis have been celebrated on a UK stamp during the 2012 London Olympics. 2000 Sydney Olympics has been commemorated on a set of lovely Australian stamps that depict sporting events like hockey, cycling, basketball etc. 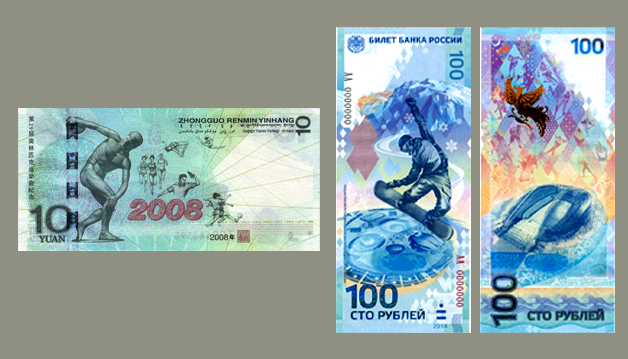 Not just stamps and coins, notes have also featured this wonderful tournament. The 2008 Beijing Olympics was celebrated by the nation with the release of a special note that depicts the famous Olympics statue of a discus thrower. For the first time the Bank of Russia released a commemorative 100 rouble note, a hundred days before the start of the Winter Olympic Games in Sochi and for the first time the Russians issued a note with a vertically oriented image on it.

Sink in to the spirit of Olympics, never give up, and don’t forget to stay sporty for adding more years to your life!

Log onto Mintage World to know more about coins of India, stamps of India and notes of India.

View all posts by Team Mintage World →
2 thoughts on “Olympic Coins, Notes & Stamps – Off the Blocks You Go”