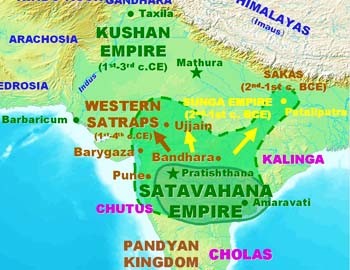 Just like any other Ancient Indian Dynasty, the sources to study Satavahanas are categorised into two a) Literary Sources and b) Archaeological Sources.

The literary sources to study the Satavahana Dynasty are comprised of, Sankrit Religious texts, contemporary Prakrit Texts, contemporary western accounts, Folklore etc. Though the Puranas and other Religious texts composed and remembered orally, they are the most trusted litereary evidences. Puranas like Vishnu Purana, Vayu Purana, Matsya Purana and Bhagavat Purana and Jain texts such as Kalakacharya Kathanaka and Tirthakalpa refer to the Satavahana History. However, these sources have limited authenticity, as the period and source of their composition cannot be completely established.

Unlike the Indian literary traditions, the Western texts prove considerably important as elements of historical evidence, mainly because of their scientific nature and precise references. The most important mentions as far as Satavahana history is concerned occur in Periplus of the Erythrean Sea. It has important references to aspects of political, social and economic history of the Satavahana times. The other important reference is Geographike Hupherges by the Egyptian geographer Ptolemy. The only problem about them is that they often present their contents, especially proper names, in westernized forms.

Under such uncertain circumstances, the archaeological sources would be of assistance. Plenty of archaeological material is available to carry out an extensive research work. The archaeological evidences are mainly comprised of Epigraphical Data, Numismatic Sources and other material evidences. Among them, the objects like pottery, sculptural remains, bricks etc. give indirect contribution, whereas while some others like coins and inscriptions are more direct. The data collected from the study of inscriptions, when collaborated with the literary sources, reveal a lot about the Satavahana Era. The important ones are Nashik Cave inscription, the Inscription King Balashri, The Naneghat inscriptions and so many minor inscriptions scattered through the Buddhist caves of Kanheri, Karla, Junnar and many other.

This brings us to the most important evidence for the Satavahana period, which is the numismatic evidence. In recent years many numismatics evidences have been found which proved to be of great assistance to fill the empty gaps between the History of the Satavahanas. The compilation of the lost data was possible because of their coins.

The economy during the Satavahana Period was well developed. Besides agriculture, many other industries and trade also flourished, bringing a boost to the economy. Bhadoch, Sopara, Kalyana etc. were the important harbours, which were under the control of the Satavahana kings. The important ports were linked with the commercial centres such as Nasik, Junar, Praisthan, Ghaukat, Chaul, Karhatak etc. Both inland and foreign trade was prospered, which gave rise to the merchant guilds. The economic life in the period can be studied on the basis of availability of coins.

Few Things to know before getting started

– The coins of Satavahanas were excavated from Deccan, western India, Vidarbha, western and Eastern Ghats etc.

– Majority of the coins bear the names “Satakarni” and “Pulumavi”. Though they belong to the different period, the names were commonly used by the kings belonging to the Satavahana Dynasty.

– The Sataavahana coins are made up of Copper, Silver, Lead and Potin in different shapes such as Round, Square and Rectangular. Silver coins are commonly seen after Gautamiputra Satakarni, majority of which depict the portraits of Kings.

– The coinage shows difference in execution, typology, and aesthetics as well as in the palaeography, with the passage of time.

– Commonly found legends on the coins are in Brahmi Script and Sanskrit language. However, the coins which have portraits of the kings have Prakrit/Telugu Legends.

Satavahana coins carry symbols, motifs, portraits and legends. The portraits and legends have direct significance where as the symbols and motifs are ambiguous in nature and may convey different meanings. However, they feature two important characteristics: a) they depict symbols and motifs used during earlier time in that particular territory. E.g. coins of king Satakarni issued in Vidisha region bear the symbols of punch-marked coins available from that region. And b) the symbols have particular religious meaning to them.

Not less than 15 different symbols appear on the Satavahana coins. The meaning behind them is not certain, although the scholars have drawn various inferences, which are connected to three main thought processes existed during the time.

Arched hill or Hill Symbol, popularly known as Chaitya symbol is the most common feature of the coinage of the Satavahanas.  The hill symbol is variously depicted on the coins, with three arches or six arches or very rarely eight arches. Sometimes it is seen with a crescent above it.

The Chakra is assigned different meanings. It probably is an attribution of the Sun as seen on the seals of Mohenjo-Daro. It might be the ’Dhammachakka’ or the time cycle symbolizing Buddhist and Jaina philosophy respectively.

Coins depicting conch shell is a rare variety. Predominantly appearing on the coins of Gautamiputra Satakarni, the conch shell is usually attributed with Vishnu.

Human Figures (both male and female) are occasionally found on the coins of Satvahana; holding accessories such as a staff or a pot surrounded by a number of symbols. Implication of such human figures is not clear.

Another rarely found symbol, indicating the traits of Hinduism and Buddhism.

IT is a very unique symbol that appears on many coins of the Satavahana Kings. It is a three – pronged flanked with two dots on both sides and a circle below it. The Nandipada symbol is found on a Prakrit inscription On Pandana hill where it is mentioned as namdipaam (Nandipada in Sanskrit). The symbol shows a close resemblance to ‘Trisula’ – A trident and hence associated with Shiva.

Pulumavi and yajnashri Satakarni issued coins depicting ship or fleet of ships. This type indicates maritime activities of the Satavahana. Collaborating with the texts of Ptolemy and Periplus, the coins are extremely valuable to reveal the extent of trade and commerce of the Satavahana period and hence their economy.

Like moon, the Sun also is associated with hill symbol. It is depicted on the reverse bust type coins of the Satavahana kings, between two crescents. The reason behind the particular placement cannot be decided. However, considering utmost importance of the Sun, there is definitely a religious connotation. The Naneghat inscription of queen Naganika begins with the salutation to the Sun.

Shrivatsa Symbol has been adopted as an auspicious mark of Jain, Buddhist as well as Brahmanical cult and is used in various religious contexts. The notion behind the symbol is Prosperity. The symbol appears on the carvings of the Stupas of Sanchi, Bahrut and Amravati and also found in the caves of Nasik, Udaigiri etc.

The Swastika is one of the eight auspicious marks and is implied to peace, prosperity and happiness. The symbol was adopted by numerous cults.

It appears frequently on the Satavahana coins, as a part of groups of symbols, between the orbs of Ujjain Symbol sometimes above the animal motif.

The symbol is called “Taurine Symbol” because it resembles with the Symbol of Zodiac Sign of Taurus. The symbol represents the head of bull with horns. The symbol is used extensively right from Punch – marked coins.

The most prominently appearing symbol that occurs since early indigenous coinage of India, including Punch marked coins. On the coins of Satavahana it appears with five or seven branches and is placed in a railing.

The symbol has many religious connotations, indicating the tree worship prevailed during ancient India adopted by all religious sects. It is also associated with the Bodhi tree.

The Triratna Symbol includes a trident like three pronged device with a line and a circle below it. The symbol is associated with both Jainism and Buddhism. According to Buddhist philosophy the Triratna symbol refers to Buddha, Dhrama and Sangha.

Ujjain symbol is the most peculiar characteristic of the Satavhana coins. The symbol is named Ujjain Symbol because a hoard of coins depicting the symbol was first discovered at Ujjain. Subsequently, Satavahana coins found at several archaeological sites seemed to bear this Symbol. However, its significance is not known.

The symbol comprises of four circles attached to the ends of the bars of a cross. The circles are either hollow or have pellets or dots or Svastika inside it. A double or single circle also appears inside the circles.

Representation of elephant, bull, lion and horse is commonly found on Satavahana coins. The occurrences of these animals have different significance, either region wise or religion wise.

These animals sometimes have relevance in accordance with particular region. E.g. the elephant, which are found on majority of the Satavahana coins, is a popular animal of South India, the region the Satavahanas belonged toThe sculptures elephants are also found at the many caves such as Karle, Bedse, Sanchi, Bhrut,Amravati etc. which belong to the Satavahana period.

The religious significance of the animal motifs can be traced back to pre-historic time. Animal worship is common in Indian religious beliefs. In the vedic tradition the animals are recognised as the vehicles – ‘vahanas’ of many gods and goddesses viz. Elephant – Indra, Bull – Shiv, Lion – Durga. The horse which appears on the coins of later Satavahana is either connected to Mother Earth or as a vehicle of The Sun.

The Buddhist context all the four animals also have specific significance. Accordint to the Buddhsit Philosophy the elephant is associated with the birth of Buddha and the stability of the Dhamma. The lion implies to the “Roar” of the Dhamma”. The bull represents the strength of the Dhamma and the horse represents the endurance.

These animals are variously depicted, facing /walking towards right or left. The elephants are widely found on the coins with their trunk upraised or hanging, and with and without the rider.

Various symbols and motifs on Satavahana coins throw light on socio-religious ideas of that period. The symbol might have acted as the emblems of the ruling authorities or an attribution to the deity they worshipped. Significance of the symbol associated with more than on religious ideas suggests that the more than one ideal were being followed by the contemporary society. This also ascertains that the rulers were tolerant to all religious practices.

BIBLIOGRAPHY:
Bhandare Shailendra
‘Historical Analysis of the Satavahana Era: A Study of Coins’