There are both inscribed and uninscribed coins which have been attributed to the Kadambas of Banavasi. The inscribed coins are mostly of a later date issued by the few last rulers. One of the most common themes in these coins is the presence of the chakra. Kannada characters are inscribed in the space between the spokes of the chakra. The epigraphs of Banavasi kingdom begin with an invocation of Siva or Vishnu indicating their Vishnu faith. 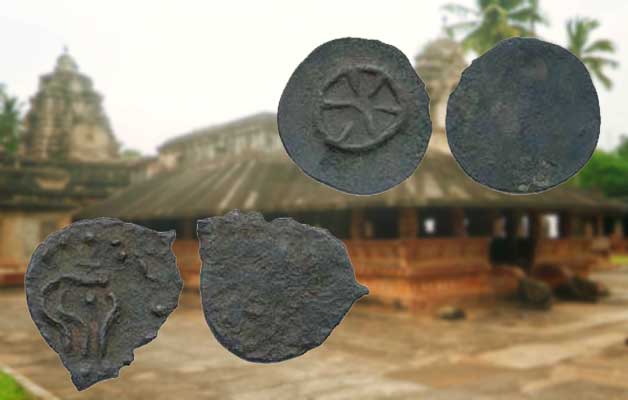 Amongst the uninscribed coins, variations of the chakra are observed with four, five and six spokes. Coins with geometrical devices and lotus-like symbol are also seen. Various forms of conch on different denominations are frequent. The wide die variations seen on these symbols indicate their use for a prolonged period of time. The chronology of these coins according to K. Ganesh is uncertain. The attribution of these coins to the Kadambas of Banavasi is based on the presence of some of these symbols such as conch shell. There is a frequent usage of the term rasi (Doharasi and Manarasi) on the inscribed coins along with the wheel. Rasi symbol means a sign of Zodiac, thus the chakra is probably depicted as a time-wheel.

With legend Sri Dosharasi: The coins of Krishnavarma II sported the title of Sri Dosharasi, where dosha could probably be attributed to moon and darkness. Coins with mint epithet Sasamka are also found. 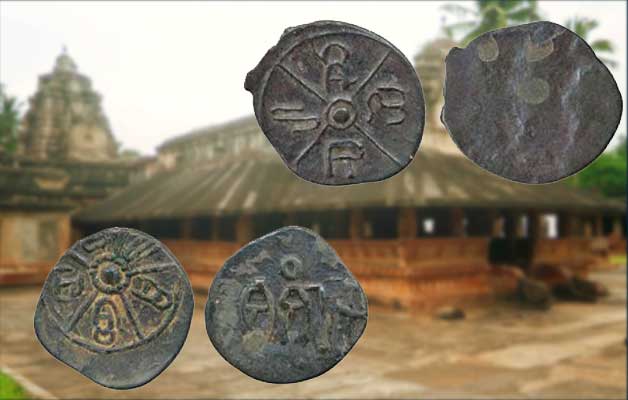 With legend Sri Manarasi: Since the legend “Sri Manarasi” is not encountered in any inscription, their attribution could be imprecise. However, the following things need to be considered before making a tentative attribution: