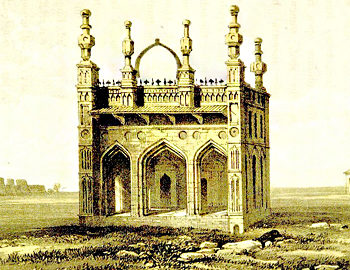 Founded in1490 AD, the Nizamshahi was one of the strongest sultanates to rise from the declining Bahmans. It was established by Malik Ahmad Shah Bahri, who had served as the governor of Junnar under Bahman rule. During the early years, sultans of Ahmednagar did not mint their own coins. They were probably over struck Bahmani and Gujarat Sultanate coins for circulation. The first ever coinage of Nizamshahi sultanate of Ahmadnagar was struck at Ahmednagar mint in the year 1565, during the reign of Murtaza Nizam Shah I.

The Nizam issued coins from some mints in their kingdoms. These coins were issued exclusively in Copper with the name of the issuer and mint name on one side and date on the other. Since there was more than one ruler with the same name, coins were attributed to the Nizams based on the date and the name of the mint where it was issued. Apart from these copper coins they also issued gold pagoda. These gold coins carry the Shi‘ite kalima, which is an exception among the largely Sunni Muslim Indian states. 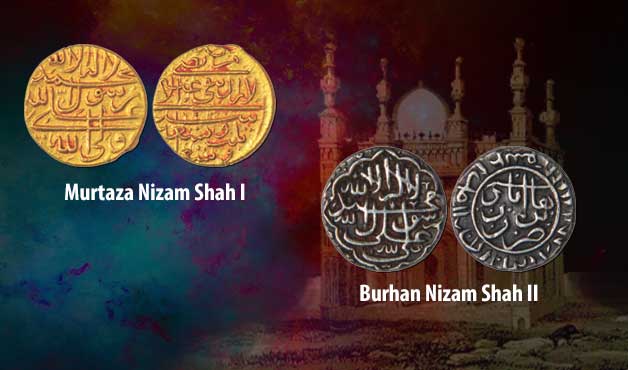 His gold coins are known as Pagoda which contains the Shia version of Kalima ‘La Ilaha Illa Allahu Muhammadur Rasulullah Ali Wali Allah’ on its obverse and reverse has Persian legend ‘Sultan Murtaza’ with the date in words. Copper coins are known as Falus which is issued in various fractions, viz., 2/3 Falus, 1/3 Falus , and 1/6 Falus. All copper coins were issued from Ahmednagar mint.

Burhan Nizam Shah II ruled Ahmednagar from 1591 till 1595 AD. In his short reign, he issued plenty of coins. During the beginning of his reign, Ahmadnagar was the main mint of his coinage which later on shifted to Burhanabad. He had issued coins in gold and copper. The gold coins issued by him are inscribed with king’s legends on the obverse and “Shi’a shahada” on the reverse. Gold and copper coins issued by him have the mint name ‘Burhanabad’ inscribed on it.

His extremely rare silver Rupee has also come to light which has Persian legend in Mihrabi style cartouche. The obverse of this coin is inscribed with Shia of Kalima, while the reverse is inscribed with a portion of Arabic legend which read as ‘Zarb Burhanabad Sanah’ in a circle. The truncated marginal inscription cannot be fully read but appears to have the name of the ruler Al-Sultan Burhan Nizam Shah clockwise.

This type of coin does not fit into any known weight-standards of the contemporary time, which makes it the most peculiar feature of the coinage of Burhan Nizam Shah II. It is said that the weight of these unique medieval coins was copied from Ottoman issues of Mehmet III from the region of Persian Gulf. It is also a rare instance of the Shia version of the Kalima appearing on an Indian coin. This gives a clear indication of the political alignment of the Deccani Sultans with Iran due to their shared faith of Shiaism.

The calligraphy and design of the coin are strongly influenced by Safavid coinage of Iran and points at the Persian influence that reached the Shia Sultanate of Ahmednagar through the influx of people and trade on the Konkan ports controlled by its rulers. The coins can, therefore, be viewed as an excellent example of cross-cultural and trans-regional influences in numismatics of regional Deccani Sultanates. 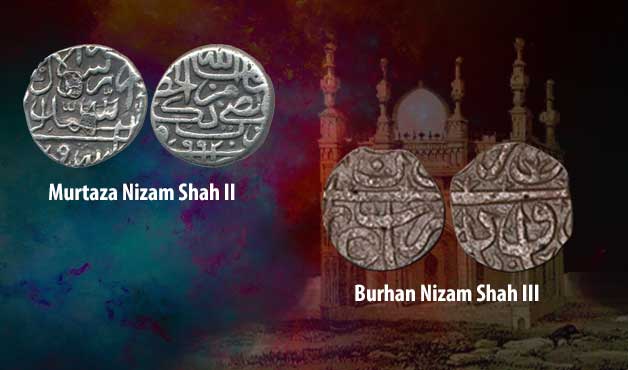 Murtaza Nizam Shah II was a sultan of Ahmednagar who ruled sultanate from 1600 to 1610 AD. He issued only copper coins in various denominations like Falus, 1/2 Falus, 1/3 Falus and 2/3 Falus from Ahmednagar and Parenda mints. Legends on these coins have the ruler’s title and mint name on the obverse.

Burhan Nizam Shah III was Nizam of Ahmednagar who ruled from 1610 to 1631 AD. He issued only copper coins from mints like Ahmednagar, Daulatabad, and Parenda. These copper Falus are struck in various fractions like half Falus, 2/3 Falus, 1/6 Falus, and 1/3 Falus. Legends on these copper coins usually have the ruler’s title on the obverse and date on the reverse.

Coinage of Nizamshahi Sultanate of Ahmednagar remained as some of the most excellent examples of Indian coinage. These coins are an excellent example that shows the regional influence of the coinage of Iran on the coins of Deccani Sultanates. Coin collectors all over the world are fond of collecting some of these rare gems in the field of Numismatics. This blog covers an overview of unusual Coinage of Nizamshahi Sultanate of Ahmednagar.