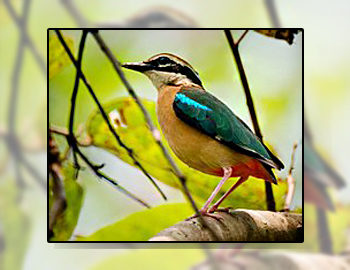 The Indian Pitta:  Indian Pitta bird or the Pitta Brachyuran featured on this 25 paise stamp is a passerine bird endemic to the Indian subcontinent. For extremely colourful and vibrant birds, they are usually shy and are hidden in the undergrowth where they peck for insects on the forest floor. They breed in the hilly regions of India and migrate to other parts in the winter, except for the drier regions. They are rather heard than seen and have a distinctive two-note whistle which is heard generally at dusk or dawn, giving them yet another name – The ‘Six o’clock bird’. Getting their name from Tamil word “Pitta” meaning small bird, these colourful fluffs are only 18 cm to 20 cm long!

Asian Black-headed Oriole: Asian Black-headed Oriole sometimes also referred to as Black-Hooded Oriole is mostly found in open forests or woodlands close to human settlements. Categorically golden-yellow with glossy black head and tips of wings, this bird survives on berries and fruits, especially the fig. It has a variety of loud melodious calls and sings in liquid fluty whistles. Breeding throughout the year, this little bird is found mostly in Asia. This little black-capped hero depicted on 50 paise stamp is much cozy around humans than our Indian Pitta! 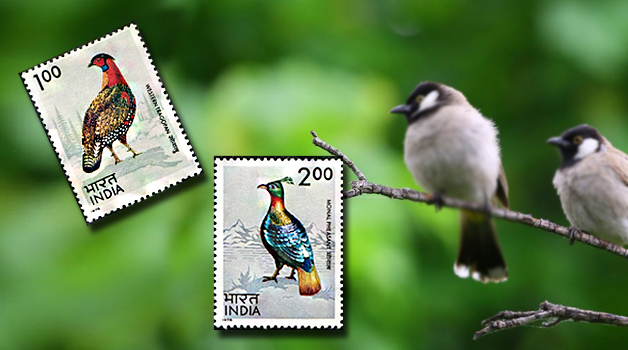 Western Tragopan: Found mostly in the western Himalayas, this bird has distinctive red-orange neck against its full black head and brown-grey plumage. Spending most of the time in the chilly Himalayas, in winter the Western Tragopan descends to grassy or shrubby areas with less snow cover. A bird shy like our Indian Pitta, it is rather heard and seen. Being categorized as “Vulnerable”, increasing tourist activities during the summers – it’s the mating season – has led to a steady decrease in its population. Did you know that “Sonalu” or Western Tragopan shown on this Re.1 stamp was officially accorded the status of the State bird of Himachal Pradesh in 2007?

Monal Pheasant: The state bird of Uttarakhand and the national bird of Nepal, Monal Pheasant is a bird endemic to the northern regions of India. The males have a stunningly colourful rainbow-like plumage while the female – like other pheasant females – is dull in colour. A highly communicative bird these Monals use several call types to express meaning to its mate or other birds in its foraging group, or intruding birds. Males also use body displays to attract females like bobbing their distinctive green head-crest and fanning their rainbow coloured tail feathers. Though found in abundance, constant poaching has created a concern for their decreasing numbers. This bird featured on the Rs.2 stamp was, until 2007, the official state bird of Himachal Pradesh.

The exploitation of land and forest resources by humans along with capturing and trapping for food and sport has led to the extinction of many species in India in recent times. The Indian government has established eighteen biosphere reserves of India which protect larger areas of natural habitat and often include one or more national parks and/or preserves, along with buffer zones that are open to some economic uses.

If we intend to pass to this rich flora-fauna to our future generations then we should take care and protect these species. It’s high time that we “Live and Let Live”!