The World Wars changed the course of history and brought with itself many changes. The political changes were just a tip of the iceberg. Daily commerce of the common people was affected the most and the wars hit the economies of the world disastrously!

In the early years of the wars, Germany faced an acute wartime coin shortage followed by hyperinflation and the collapse of its economy. The victor nations in World War I decided to assess Germany for their costs of conducting the war against Germany. With no means of paying in gold or currency backed by reserves, Germany ran the presses, causing the value of the Mark to collapse. Between 1921 and 1924, German money, denominated then in marks and pfennigs, deteriorated in value. The German government printed and circulated more currency to make the reparation payments.

The value of the paper money evaporated very quickly. Germans needed enormous amounts of paper money to buy even basic commodities. It was not uncommon to see shoppers hauling buckets, bags, even wheelbarrows full of banknotes. Children used worthless banknotes as toys; their mothers used them to light stoves and boilers, line cake tins, even as wallpaper. Many Germans abandoned money altogether and began bartering as a means of obtaining what they needed.

Let’s have a look at some of the banknotes or the German Papiermarks that were issued during this post World War I hyperinflation. 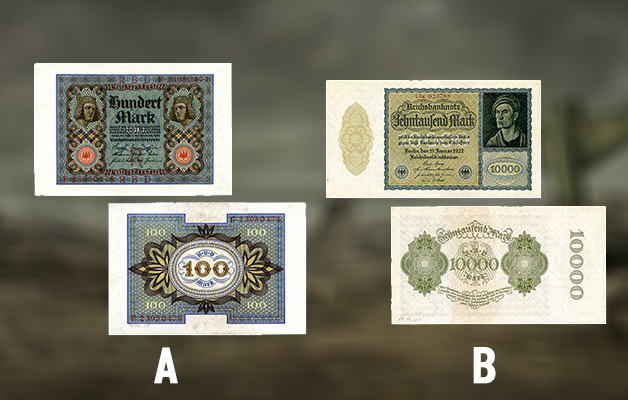 This 100 mark papiermark of Germany has on its obverse the bust of the “Bamberg Horseman” a stone equestrian statue by an anonymous medieval sculptor in the cathedral of Bamberg, Germany. The reverse has a floral rosette design along with the denominational value in numbers. This note is brown and blue-green in colour.

The note depicted alongside (b) is a first issue 10,000 Papiermark of 1922. The Blue-green on olive-brown underprint banknote has the portrait of Bildnis Eines Jungen Mannes by Albrecht Durer to right, while the back sports the German Coat of Arms called Imperial Eagle. This banknote is also known as the “Vampire Note”! 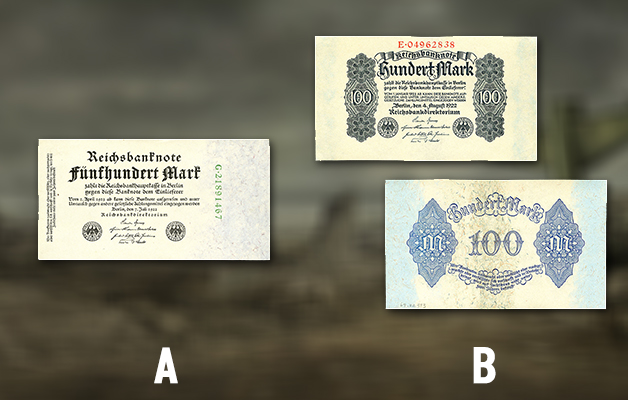 This is a second issue banknote of 1922. The obverse of the note has Bank seals, signatures and text, while the reverse is Blank (uniface banknote).

The text on the note reads as “Reichsbanknote. The Reichsbank headquarters in Berlin pays five hundred marks against this banknote to the consignor.

From April 1, 1923, this banknote can be called up and confiscated in exchange for other legal means of payment. Berlin, July 7, 1922. Reichsbank directorate. Anyone who imitates or falsifies banknotes, or procures counterfeit or counterfeited goods and places them on the market, will not be punished with a term of imprisonment of less than two years. Five Hundred Reichsmarks.” 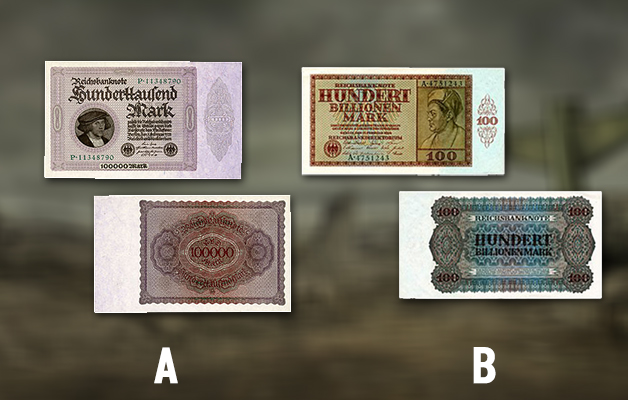 This purple-brown banknote has on its obverse oil and tempera on oak portrait of the Merchant Georg Gisze, 1532 by Hans Holbein der Jüngere (Hans Holbein the Younger) (c. 1497-1543) to left with Bank seals and text. The reverse has Ornamental designs with denomination “100000” in it.

This banknote has the portrait of Willibald Pirckheimer based on a painting by Albrecht Dürer to right along with text and bank seals on its obverse. Willibald Pirchheimer was a German Renaissance lawyer, author and Renaissance humanist, a wealthy and prominent figure in Nuremberg in the 16th century, and a member of the governing City Council for two periods.

The reverse has ornamental designs and the denominational value in numbers – written in four corners; and words- written in the centre.

The failing economy of 1923 was miraculously saved by two people – Gustav Stresemann and Charles Dawes. Surprisingly, under their leadership started the period of stability and success. The period 1923-1929 was a time when the economy boomed and cultural life flourished in Germany. Under Stresemann’s guidance, the government called off the strike, persuaded the French to leave the Ruhr and even got the rest of the world to allow Germany to join the League of Nations in 1926. Under Charles Dawes, German Reichsbank was reformed and the old money was called in and burned. Dawes also arranged the Dawes Plan with Stresemann, which gave Germany longer to pay reparations. Most importantly, Dawes agreed to America lending Germany 800 million gold marks, which kick-started the German economy. This ended the hyperinflation.