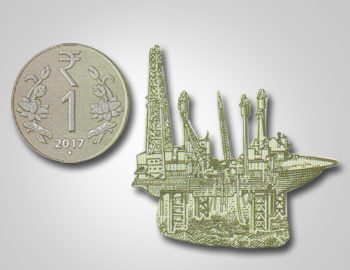 One Rupee Note is the smallest Indian paper denomination in India. But how many of us know that the One Rupee note still exists?

Well… Not many. But yes, the One Rupee note still exists and is accepted as a legal tender of exchange. And this One Rupee note is celebrating its 100th Birthday today. Yeah!! You heard it right.

But before we get into the journey of One Rupee note, let us see the origin of the term ‘Rupee’. The word ‘rupiye’ is derived from a Sanskrit word ‘rupa’ meaning “wrought silver, a coin of silver”.  Arthashashtra, written by Chanakhya also describes silver coins as ‘rupyarupa’.  Sher Shah Suri (1540 to 1545 AD) issued a silver coin which was termed as ‘Rupiya’ and the legacy is continued until today.

So this was the story of the term Rupee; now let us have a look at the history and the journey of One Rupee Note in India.

The first note whose payment was guaranteed by the Government was introduced in circulation for the first time through the Indian Paper Money Act of 1861. But the most fascinating and important amongst all the notes was the One Rupee note which was issued for the first time as a promissory note on 30th November 1917 during the reign of King George V.

This first One Rupee note was signed by M.M.S.Gubbay (Controller of Currency in charge of Independent Department of Currency). These notes were issued in the form of a booklet containing 25 notes. Check out the description below:

The Obverse of the note has English legend ‘Government Of India’ in the centre; Vignette – A silver coin depicting the portrait of King George V – in the top left corner; A red rosette relief underprint in dual tone and ‘One Rupee’ in the centre; Silver numbers on the top right and lower left areas; ‘1/Rupee’ on the top right and bottom left; Signed ‘For The Government Of India’.

The reverse has a stylized GRI. – ‘Gergius Rex Imperator, the official cypher of King George V’ in the top left area; Language panel in the centre; Reverse of the 1917 coin in the top right area.

The first One Rupee was a good attempt by King George V which perfectly depicted its simplicity in terms of colour and design. Check this note in more detail.

The second note was issued on 24th July 1940 again in the reign of King George V. It had more elaborated design and decorated border on the obverse. Here the language panel is shifted to obverse and a significant change can be noted when compared to the note to 1917. 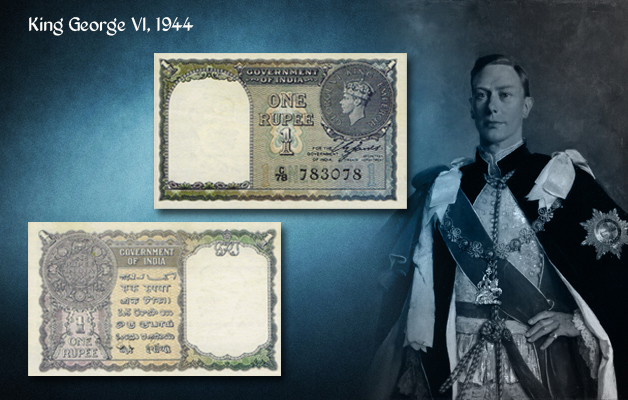 Look at the image above and tell us what did you notice on the reverse?

This note was issued during the reign of King George VI in 1944. It was the very first attempt of issuing a One Rupee note which had a prominent reverse design similar to obverse. Here the most noted feature of this note is that it got an elaborated reverse. It has a stylized GRI and crown on the watermark window; ‘Government/Of India’ in the centre; ‘1’ in the top corners; ‘1/One/Rupee’ in the lower left area; Language panel in the centre; Reverse of the silver coin dated 1940. 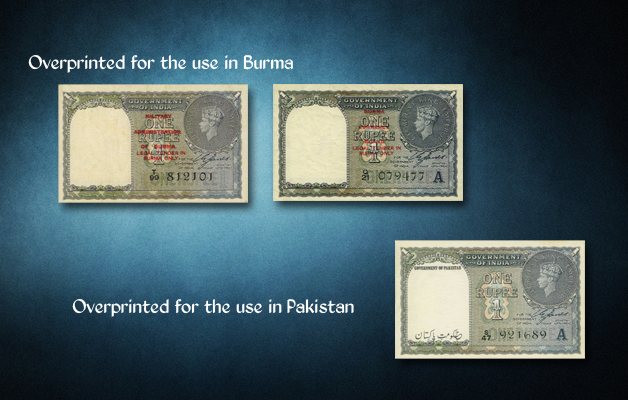 Apart from British India One note Rupee there were Hyderabad, Kashmir, Indo French and Indo Portuguese notes too.

After the Independence of India, Government of India redesigned Re.1 note in 1949 and Secretary, Minister of Finance was K.R.K. Menon.

The King’s portrait was replaced by the Lion Capital of Ashoka (National Emblem) and the reverse has a large floral motif. The design of the note was kept almost similar to the King George VI’s One Rupee Note.

The significant change was the addition of the obverse and reverse coin of One Rupee Coin of 1951 and the Ashokan Pillar Capital (National Emblem). In the same year, the colour was changed from Green to Violet. 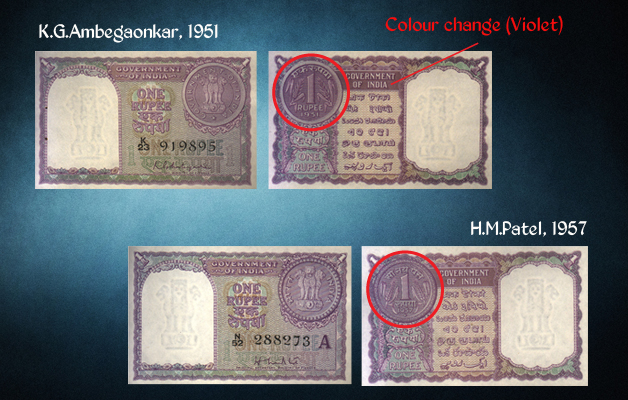 Below the signature ‘Principal Secretary Ministry Finance’ was added. The design of the coin on the note was changed and this note has ‘Sau Naya Paise’ coin.

A completely new design was introduced in 1966 under S.Bhoothalingam and the size of the note was reduced. 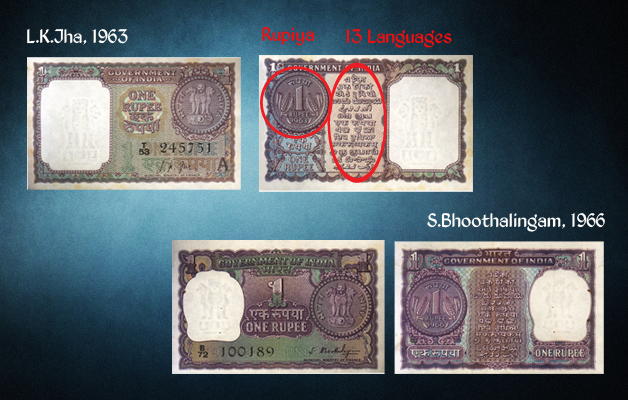 In 1969, Gandhiji completed hundred years of his birth and for the very first time in history, a commemorative coin of his was issued on the One Rupee Note. Refer the note given below: 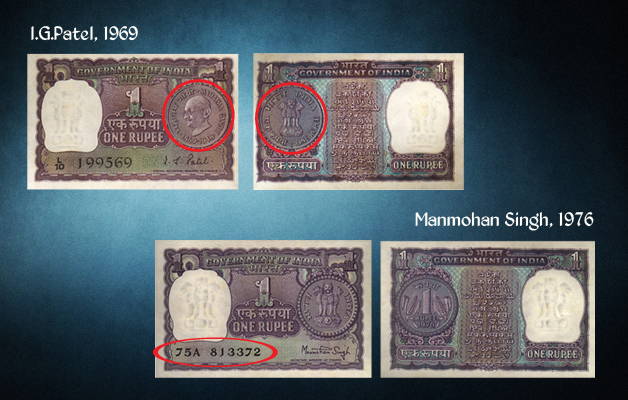 The style and font of the serial were changed and the prefix ‘J’ was discontinued in 1976, Manmohan Singh(Finance Secretary). The most significant change was seen in 1981 as the reverse of the note was changed to Offshore Oil Rig “Sagar Samrat” design and the Hindi signature was introduced for the first time along with the English.  While after two years in 1983 the coin design of One Rupee was changed on obverse and reverse. 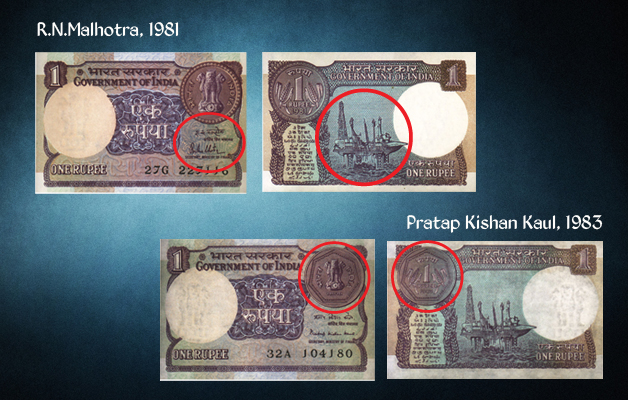 This design remained unchanged and was continued till 1994. Due to the high cost of its production, the 1 Rupee note was discontinued and was finally reissued in the year 2015.

The One Rupee note made an entry in 2015 (Finance Minister- Rajiv Mehrishi)  by introducing few changes in the note of 1994.

The following changes were introduced in the new note of One Rupee:

The star series, new One Rupee design, change in colour (pink and green) and 15 languages on the panel.  While the telescopic series ‘Secretary, Minister of Finance’ was introduced on One Rupee note in 2017.

Few Facts about one Rupee note. We are sure that you must have not known these and probably would be amazed.

This all amazing facts makes the One Rupee Note stand differently from other Paper Currency. So let’s cherish its ‘100 Birthday’ and remember the smallest denomination of India. The One Rupee Note has come a long way since 1917!

The One Rupee Note has drastically changed in these 100 years.  Its evolution has seen variations in design, size, texture, and colour. From Plain white to pink and green, it has turned indeed beautiful! In each and every phase we saw some change in its design, from simple plain reverse to the current beauteous reverse.  It is just the play of time and period. This One Rupee Note has faced various challenges and still had been on its toe to survive in India. We wish the One Rupee note a very ‘Happy 100th Birthday’.  Hope you enjoyed this journey of One Rupee.

And you can celebrate this day with us by joining in INPEX-2017 National Philatelic Exhibition at World Trade Centre, Mumbai.