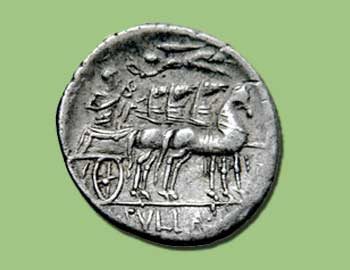 We are fortunate enough to share our ecosystem with animals. They enhance the natural beauty of our planet and even the most ferocious amongst them illustrate the nature with its refined and primal grace.  Many artists had tried to capture this creation of nature with the brush or chisel but yet few come near to copying their perfection. Every aspect of a man’s creativity is inspired by its surroundings. Hence, it shouldn’t surprise us to see these beautiful animals depicted on coins too. One of the finest artistic representation of them are the animals on Roman coins. This coinage covers the wide variety of fauna, the embellishment of these beasts on Roman coinage is unique and awe-inspiring.

As one of the most studied and collected coinages of the world, Roman coinage offers the most beautiful illustrations of animals. The social and religious culture of Rome had a deep connection with the animals. Their fascination with the wild beasts is evident through their games, painting and intricate design on their coins. 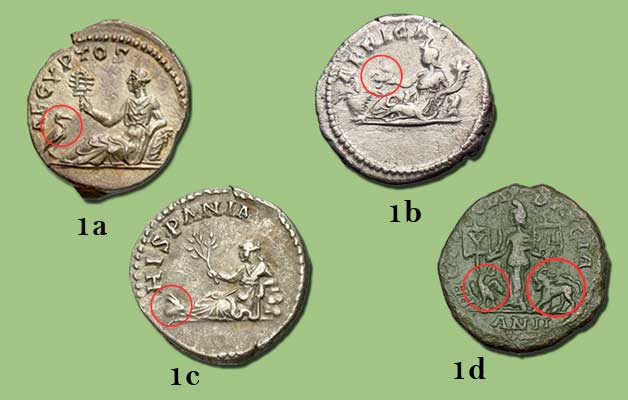 Animals associated with the province

The Republic and Imperial Rome administrated vast jurisdictional area under it in which many provinces were controlled. Each province was personified as a deity attached to an animal, due to some significance. The above-shown image depicts four coins from different provinces of Rome. Each coin portrays different animals.

The first coin (1a) depicts Aegyptos, Egypt personified as a woman seated on the ground with Ibis, near her leg, depicted facing the goddess. This reverse design of this coin was common in all the coins of Emperor Hadrian. These coins were stuck on the occasion of the Emperor’s visit to Egypt. The Ibis was sacred and peculiar to Egypt. It is said that this bird would die if taken somewhere else. Ibis was worshipped, due to its nature to destroy the serpent and insects that destroy the food supply.

The province of Africa, a northern part of the vast continent under the administration of Rome extended to the shores of the Mediterranean Sea. The personification of this province on the coin was same as Aegyptos, her headgear was in the shape of elephant’s trunk. Africa holds a scorpion in her right hand on the above-shown coin (1b).

This coin was struck under Emperor Hadrian on his journey to the Province of Africa. The symbol of the scorpion is seen as a rich natural resource of this province. The Scorpion is also recognized as the goddess Africa third venomous animal.

The silver denarius (1c) depicts the personification of the province Hispania near her feet a rabbit. The significance of the hare on this coin was that this animal was found in abundance in Spain. Emperor Hadrian depicted Hispania on the silver, gold and bronze issues during his visit to Spain province. Later on, the same design was copied by Emperor Ulpius Cornelius Laelianus on his gold aureus in 269 CE.

The coin showed in the image 1d is interesting: the personification of the Dacia province in the form of a woman is illustrated in the centre with the eagle and lion depicted near her leg. The animals shown on this coin represent the Roman legions (army units). Lion is the symbol of Legio XIII Gemina and eagle represents Legio V Macedonica legion. This coin was issued to pay homage to the Roman legions garrisoned in the province during Emperor Philip of the Arabs reign.

Other interesting coins presenting goddess and animals are Mauretania with the horse, Africa with the lion, Arabia with camel and Moesia with bull and lion, etc.

The coinage of Roman Republic was issued by the authority of the Roman senate. The denarius series of this monetary system had different variations, in this series different types of anagram, monogram and small animal symbols came up, this kind of coins circulated till 150 BCE. These symbols were the initials of moneyer ’s, the mint master in the Roman Republic, three mint masters issued coins 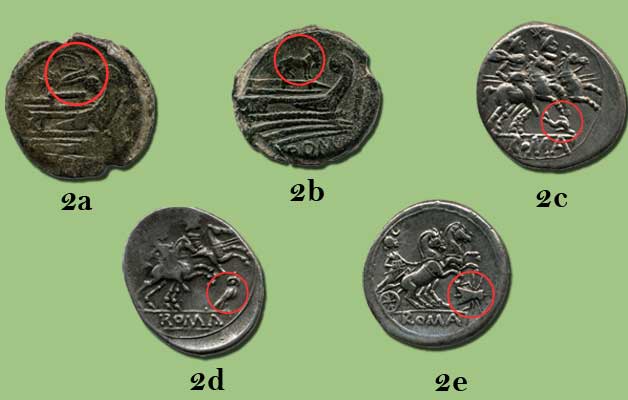 The bronze As depicted in the above image (2a)  features a butterfly resting on a vine branch with leaves and grapes around it. In Roman culture, the butterfly represents liberation after the death because of their life cycle. The soul is also called butterfly-soul which gets liberated from a cocoon of the body after death. The significance of butterfly in this coin is unknown, it may be the initials of a moneyer.

A donkey is depicted on the bronze as (2b) standing above the ship Prow. The donkey was an important domestic animal for the common citizens of Rome. On this coin, it may be connected to the moneyer’s origin from his lower class.

The dolphin is depicted on the Roman coin in a fixed position or in a state of motion. Dolphin in important to Neptune the god of the sea, it was also associated with goddess Venus and God Apollo. On this denarius (2c) of the republic, the dolphin is depicted below the Dioscuri. This may be connected to a moneyer, but the significance of these initials is still unclear.

The fourth coin in the image, silver denarii (2d) depicts an owl below the deity Dioscuri( twin sons of Zeus). The owl is the companion of Minerva, the goddess of wisdom and strategies. Romans believed that the presence of a hooting owl on the roof brings the news of death. Owl was also the embellishment of knowledge and intelligence.

The last animal in this category is a fly, It is depicted at the bottom of the Biga driven by Goddess Luna on the last coin (2e). This insect may have a symbolic importance in the Roman culture. It has some connection to the epidemic-prone area, but any documented proof is not present. This symbol mostly appears on the coin in the anonymous denarius coinage of the Republic.

Animals with cart and carriages

The universal use of domestic animals is to pull a cart or carriage, to help transport goods or people. Then why would the Romans be any different? In Rome, these animals were used for pulling chariots during games like racing. Some of the animals were particularly assigned to pull the chariot of the important people of the empire. 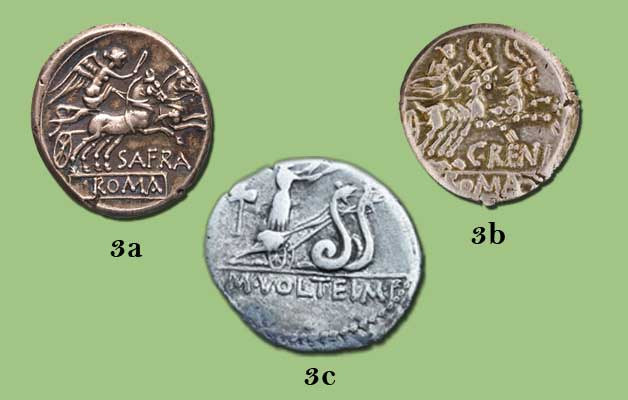 The above-shown coin (3a) portrayed two animals pulling a chariot, this vehicle is usually called a Biga. It was used in Rome for sport, transportation and ceremonies. The most common animal on this chariot was a horse, but on art or architecture or even on ceremonies it was replaced by other animals. The driver of the Biga was Bigarus, this two-horse chariot represents moon in philosophy.

The two horses pulling chariot on coins was a common icon of Republic coinage. Two yoke chariots were scared to Goddess Luna, she was always shown driving it. The above-shown denarius depicting two-horse chariots were drawn by the goddess Victory. The philosophical theory relates the duality of the horse with a metaphor of the charioteer’s soul divided by genesis and apogenesis.

The second coin (3b) depicts the Biga of goats, in Roman culture goat represented victory, intelligence and even voraciousness. The Roman god Faunus was also a half goat, goat blood was used in religious scarifies. In the above coin, Juno is riding the Biga of goats.

This benevolent coinage of Roman republic also depicted biga pulled by snakes. The silver denarius (3c) depicts goddess Ceres holding the torch and two snakes pulling the chariot. The snakes are associated with health and medicine in the Roman mythology, it is believed that they consist the power of healing.

There is also the Biga pulled by Cupids depicted on the denarius of the republic, Neptune is driving the biga of Hippocampus (sea horse like mythological creature), Hercules driving the Biga of Centaurs. There were elephants and stag Bigas also. 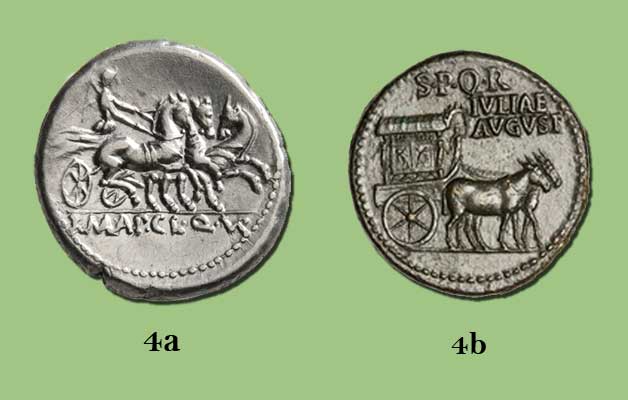 The first silver denarius coin (4a) depicts Victory driving the Triga pulled by three horses.  The depicting of this chariot is a rare sight on both Roman architecture and coinage. The reference shows that the use of Triga in the war was more than that in the games was quite less. The Etruscan used three horses in a race, the third horse was used as a trace-horse.

The second chariot is actually a cart called Carpentum depicted on the Sestertius (4b). This cart was used by Roman for travelling, but later it gained the religious importance. This cart was pulled by mules, this animal was occasionally replaced by the horse. The emperor of Rome used Carpentum on the occasion of a long festive procession.

The last type of this category is a Quadriga depicted on the coin that is featured in the main image of this blog. The Quadriga is pulled by four animals often mounted by a male deity, but few goddesses also drive this chariot. God Apollo is often depicted driving the four-horse chariot. In the above-shown silver didrachm, goddess Victory is driving the horse chariot. Quadriga appeared on all most all Roman pantheons including Sol, Minerva, Libertus, Jupiter Mars and even the deified emperors. On the coin of Phoenicia, Poseidon, the god of the seas drives the quadriga pulled by four Hippocampus.

At the end of this analysis, it would be important to highlight about the six-horse chariot called Seiuga. It required a high degree of skill to ride this. This chariot was hardly used for racing; even the representation of this chariot on the coin was absent.

All the animals on the Roman coins have an important connection to the culture. Different animals had different values in the Roman religious practices. Pig, Ram, goat and a bull were sacrificed to the god Mars during the time of war. In the marriage ceremony, Roman sacrificed a sheep or a lamp as the insignia of purity. Julius Caesar also had a full farm of lions, his beasts were used for public entertainment. On the coins of Julius Caesar elephants were the symbol of his authority and power over the Roman Republic.

The use of animals in every aspect of life was an important factor for many civilizations and empires around the globe. In a way, these practices were responsible for the extinction of many species, yet their essence was embellished on the coins. Animals on Roman coins represent the best iconography of Roman fauna. The complex imagination of mankind and its affinity for art has given us the privilege to know about these mighty beasts which are extinct or on the verge of extinction.

We are privileged to share our ecosystem with them and harming them is going to harm us indirectly. They sustain the balance of our nature and control the food chain. Without these creatures, we will have a difficult time adjusting. Let’s pledge to protect, conserve and help them restore their natural habitat.

Animals on the Roman coin by T.R McIntosh