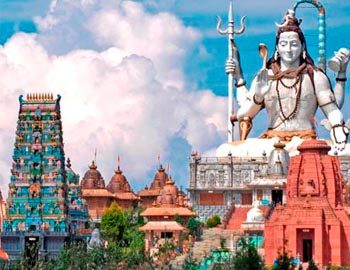 Ancient India is full of marvel and every time we turn the pages of it, we stumble upon something fascinating. Today we will study the Indian Temples on coins and revise the evolution of temple architecture! Numismatics has discovered various historical facts about Indian history. Every tiny piece of coin reveals the different story behind it. Coin collecting is a fascinating hobby, but what attracts you the most when you see a coin?

Metal or symbol or both? While the symbols play an important role in Numismatics. A coin without a symbol would just be a sole piece of a metal. All the symbols of the ancient coins were perceived and inspired by nature, for example, trees, mountains, animals, sun, moon, fish, etc. But there are few of the symbols on coins which we never thought that it would exist on Ancient Indian coins; this ‘rare-to-see’ symbol on the coin is ‘Temple’.

It is believed that the initial temples were made up of wood, mud and perishable material so there are no traces of the early temples in India. However, archaeologically speaking the beginning of the temple in the form of the stone structures are said to evolve or developed from the 6th or 7th Century. Initially, the temples were simple and had a flat roof. But slowly and gradually shikharas (kalasha) were added on the top of the temples. The gradual evolution of temples also marks the development of temple plan, ornamentation on the pillars, doorways and etc. And today we see them in almost each and every lane we pass by.

But how often do we see temples on the coin? No, Not really… However, there are few coins which have temples on coins So, let’s check these specimens.

Janapada coins have tiny-small punch marked symbols on them. Saurashtra Janapada (350 to 250 BC) is one of the Janapadas where a temple is depicted on the coin. The obverse of the coin (refer to image 1.1) depicts a building with an arched entrance and curved roof, enclosed in a railing. This is probably believed to be the earliest representation of a temple on Indian coin. 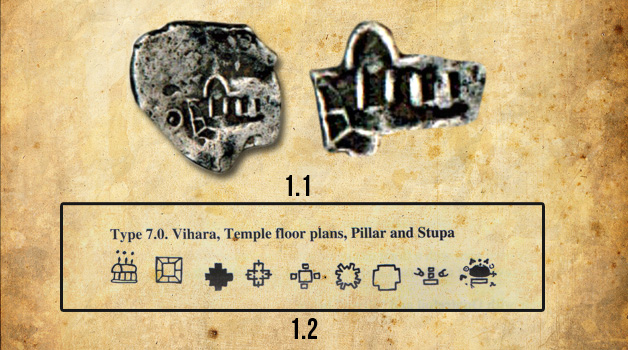 There are total nine subtypes[1] (refer to image 1.2) of Saurashtra Janapada coins where we see religious structures and floor plan of temples. Do you know any other Punch marked coin which has a temple on it?

Taking few more steps ahead and reaching to North of Ancient India. Audumbaras (c.100 BCE, Republic Kingdom) is also known to issue coins depicting temples. The coin depicts a Shiva temple with a trident on right (refer to image 2.1).  And the other coin in 2.2 shows a temple on the obverse with a wavy line or a river below.

Yaudheya, an ancient kingdom of North issued coins with temples. Not just one coin but many coins were issued by this Republican state which reveals the marvellous temple architecture of Ancient India. Coin No 2.3 is one of the Yaudheyan coins which has a temple on it. To reveal the secrets on temples on Yaudheya coins click here. 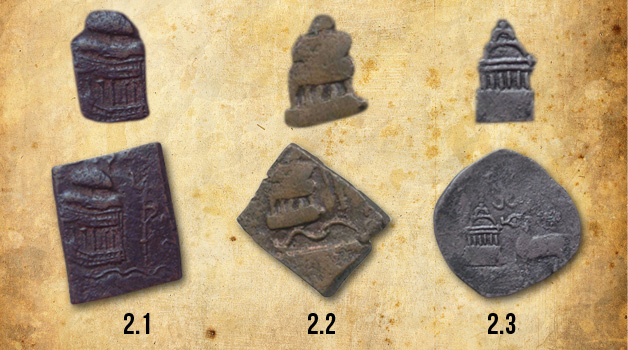 A pillared temple on a pedestal with a domed shikara is seen on the coins of Agras [2] (200-100 BCE). Trigartas [3](100 BCE), an Ancient kingdom of North India also has a temple on a coin (lying in British Museum).

Pallavas was the south Indian ruling dynasty from 275 CE to 897 CE, most noted for their fine architecture. Mahabalipuram Shore temple is the best example of Pallava architecture, built by Narasimhavrman II. So if we compare both the temple structure side by side (3.1 coin and 3.2 temple) here we note that the structure depicted on the Pallava coin(c.500 CE) is somewhat similar to the Mahabalipuram temple(built around c.700 CE).  However, the coin was issued before the Mahabalipuram temple was constructed. But isn’t it amazing to see a ‘temple’ as a massive stone structure on the one side and a tiny ‘solid piece of metal’ on other?

The Kadambas were of Brahmin origin; they were the follower of Lord Shiva and are known to build many Shiva temples. They issued very fine gold coins with a typical lion on it. The featured coin 3.3 (c.1000-1100 AD) depicts a lion facing left and a temple within the dotted border of circles. The reverse has a Trishul and Devanagari legend ‘Shri Malaha / Ramari’.  The temple on the obverse is probably a Shiva temple as Trishul is seen on the reverse side.

Rashtrakuta another powerful ruling dynasty of India was also one of the dynasties who had built beautiful temples. Kailash temple (c.800 AD) is the marvellous piece of rock-cut architecture. But what makes this temple unique? It is not built; it is finely cut and carved. Yeah…Now, this takes the Kailash temple to the next level of imagination. It is believed that almost 7,000 labours and 150 years must have taken to build this massive structure. This shows the high technology of Ancient India, as such structures are impossible to make without using big machines.

When the temple architecture is so mesmerizing, Rashtrakutas cannot forget to issue coins with a temple on them. The given Gold Gadyana(c.1000-1100 AD) depicts a temple flanked by a crescent and swastika at the top and two lamp posts (refer to image 3.4).

The similar beautiful temple architecture is seen on the coins of Chalukya[4].

Mangalesha (597-610 AD) a ruler of Chalukya issued two coins having temples. One of the coins depicts the temple entrance (refer to image 4.3) while other has a temple with a lintel surmounted by a single horizontal step (refer to image 4.2).

While another issue of Chalukya 4.1, depicts a Shiva temple with its architectural features like Pillar, Vimana, and Shikhara, flanked with two temple lamps.

Shilahara (c.110-1200 CE) issued a Gold Gadyana which shows a splendour temple architecture with pillars, vimana, and shikhara. The interesting thing is to note a ‘lingam’ at the centre. So 5.1 is undoubtedly a Shivaite temple.

Singhana, a ruler of Yadavas of Devagiri issued a gold coin depicting a temple of four tiers[5]. A copper paisa issued in the name of Shah Alam (1728-1806 CE) has a dotted temple on the reverse of the coin[6].It is an unlisted variety.

The double gold Pagoda of Madras presidency, East India Company issued a coin having a beautiful gopuram of a temple (image 5.3). Gopuram is usually seen on the temple entrance of South India. It is a typical Dravidian style of temple architecture. The concept of Gopuram is originated from the Pallava kings.

Sadul Singh (1943-1949 CE) of Princely States of Bikaner issued a gold coin (refer to image 5.2) which has a temple on the obverse with other auspicious symbols like Trishul, parasol, and flag.

On the completion of 1000 years of Brihadeshwara temple; in 2010 Reserve Bank of India issued a commemorative coin of 5 Rupees which depicts temple of Brihadeshwara temple (Tamil Nadu). Mumbai Mint also issued Rs 1000 Commemorative coin with the same picture as on the Rs 5 coin. It was the first 1000 Rupees coin to be released in the Republic of Indian coinage. This coin was a Non-Circulative Legal Tender (NCLT). Brihadeshwara Temple is one of the largest temples of South India and an excellent example of Tamil temple architecture. It was built by Raja Raja Chola I (Chola dynasty) in 1010 CE.

After an elaborate study of the above temple on coins, Numismatics suggests that Indian temple came into the existence before the Common Era. However, the earlier structures were made from less durable materials like timber, bamboo, brick and mud plaster which may have disappeared because of its perishable nature and we don’t find its relevant records prior to Gupta dynasty. So in case if we consider Saurashtra Janapada’s coin as the earliest numismatics reference of the temple, then we take temple occurrence roughly 600 to 700 years before the powerful golden age of Guptas.

From 350 BCE to 2018 CE, we see an extensive progress in Indian temple architecture. The changes were slow and developed the three most popular style of temple architecture in India: Nagara (North India), Dravida (South India) and Vesara (a mixture of North and South style). Next time you visit a temple make sure that you are not just visiting a religious place but also an ancient thought of structure which goes back to at least 2350 years!