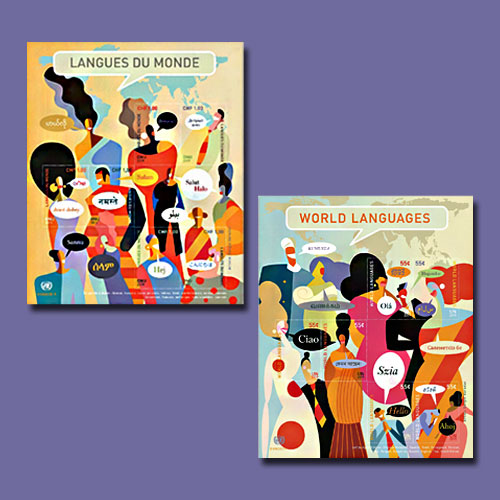 The day is observed each year on Feb. 21 to “promote awareness of linguistic and cultural diversity and promote multilingualism,” according to the UNPA. The UNPA will issue 18 World Languages stamps on Feb. 21 in three panes of six, one pane for each UNPA post office. Sergio Baradat of the United Nations designed the panes. His designs feature symbolic people in colorful clothes greeting each other, with their greetings inside speech balloons.

Geneva pane of six 1-franc stamps includes 14 languages in 13 speech bubbles. The other languages on the UNPA/Geneva pane are Burmese, French, Russian, Polish, Hebrew, Hindi, Azerbaijani, Urdu, Hausa, Amharic, Danish/ Swedish and Japanese. Inscriptions on this pane are in French with “Langues du Monde” at the top.