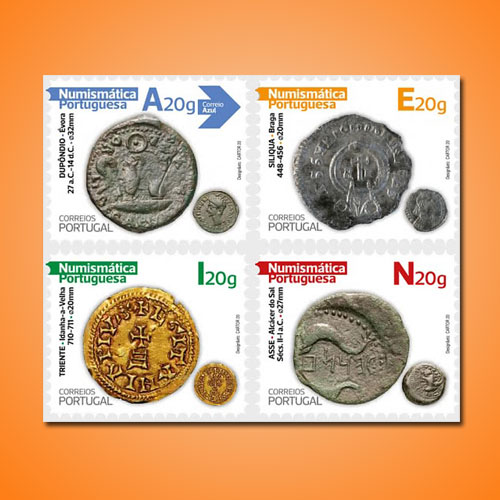 The stamps are based on the coins minted on Portuguese soil in pre-national times, covering 1350 years of history of the Western Iberia, from Antiquity to the Middle Ages. A set of four Stamps in the values of N20g, A20g, E20g, and 120g issued by Portuguese Post in partnership with Portuguese Mint & Official Printing Office.

Found during archaeological excavations or part of museological collections in Portugal, the coins shown on these stamps are a very important source of information about the societies of the past, now also remembered in a stamp issue where philately has a close conversation with numismatics.

The N20g stamp depicts a pre-Roman coin is a bronze, minted in Alcacer do Sal during the 2nd or 1st Centuries BC. It shows two dolphins, facing left, and the head of Heracles-Melqart, also facing left, with a lion skin over his shoulder, combined with pre-Latin letters.

The A20g stamp depicts This Roman Coin is a Bronze Dupondius minted in Evora between 27 BC and 14 BC, under Augustus. t shows a patera, an aspergillum, a pitcher, a simpulum and a knife, with the words - "LIBERALITAS IVL EBOR" (meaning "Liberalitas Julia Evora"), and the head of Augustus facing left, with the words "PERMISSV CAESARIS AVGVSTI PM" ( meaning "By permission of Caesar Augustus, Pontifex Maximus").

The Third stamp of E20g features The Suevic Coin is a Silver Siliqua minted in Braga in 448-456, under Rechiarius. It shows a tall standing cross encircled by a crown of laurel, with the letters "B-R" and below, a palm, with the words - "IVSSV RICHIARI REGES" (meaning "By order of Rechiarius King"), and a bust of Honorius, facing right, with the words "DN HONORIVS P F AVG" (meaning "Our lord Honorius, pious, felicitous, august").

To know more about stamps Visit philamart to view and purchase variety of stamps from all over the world.