Home News Short History of Ancient Coins from Around the World 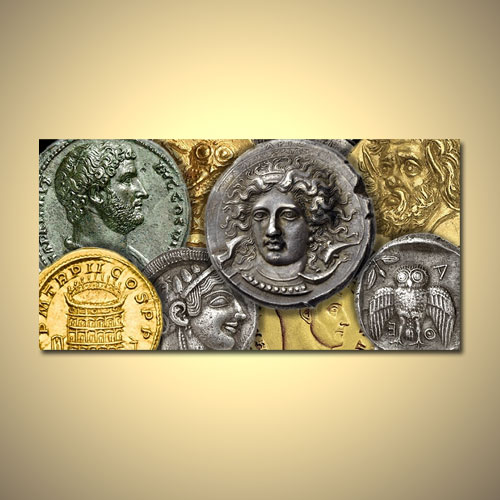 Short History of Ancient Coins from Around the World

For over 2600 years, coins have been used as currency. As early as the 6th century BCE, various civilizations used coins as money, including the Lydians, Romans, and Greeks. Although the first civilization to use them is debated by experts, what’s certain is the coins were made of a gold and silver alloy called electrum. Alloys were used because they’re a stronger metal, physically, and less likely to corrode.

Ancient coins were not so different than those still in circulation today; both frequently depict profiles of royalty and great leaders, or scenes displaying power in nature. A great example of this is found in one of the earliest coins ever discovered is the Lydian stater which illustrates a confrontation between a lion and a bull.

The Roman Empire: Coins from the Roman Empire are still among the most popular ancient coins for collectors. The Romans began coin production around the year 326 BCE. Their currency, the denarii, was circulated for over 400 years. Romans struck coins primarily with gold and silver, and occasionally bronze. The Roman denarii had different coins, made of different precious metals, representing different values. For instance, one gold denarius was equivalent to twenty-five silver denarii pieces. During the height of the Roman production and use of denarii, the ancients produced an impressive seventeen million coins per year.

Ancient Chinese Dynasties: At the same time, several thousand miles east, the Chinese were producing their own coinage. The coins were in circulation across multiple dynasties. Unlike the Romans, they primarily used copper and iron in their currency, although they occasionally used silver. It’s worth noting that precious metals, like gold and silver, were uncommonly used. Around the same time, the Chinese debuted deerskin notes, in addition to their coinage. These deerskin notes were an early iteration of the Chinese invention that came centuries later, paper currency.

Medieval Europe: Over one thousand years later in medieval Europe, coins continued to evolve and change with the technology and resources of the day. Tools and processes improved, and right alongside it, the demand for coins increased. England is commonly considered the quintessential medieval society, and it was indeed the premiere coin producer. England alone had more than 1,600 types of coins, which required extensive production and distribution. In fact, there were over 200 active mints and twenty-five different royal issuers of coins, the majority of which were comprised of silver.