The wars begin as a conflict between the two nations or two ideologies and gradually, it takes a wide form that engulfs the entire world. With War comes change! And the political changes are just the beginning. Living in a country that’s at war changes the way you think, it changes your perspective on everything! One such change that every war in history brought with itself was the disastrous plunge in the economy! But it is vital to understand that even during these gruesome times, life does not stop and the economic needs remain just as same as that during the times of peace. The world, over the centuries, has witnessed a fair share of wars. Each of them was equally gruesome and exhausting as the previous one which brought about a serious upheaval in the treasuries of not only the participating countries but also of those who were dragged into them. While talking about the wars, one cannot ignore two of the most devastating wars of the history. The World Wars! They began as a conflict between the participant country and after a while the whole world got sucked into this war of differences. Even, the counties which stayed neutral did not remain unaffected. One of the major crises that felt both during and after the war was the financial drain. As the war takes a serious toll on the state treasury, various forms of alternative currencies are introduced to cope up with the economic and financial crunch. War Savings Stamps is an attempt to put together the two ends – earnings and expenses.

The launch of war savings stamps (WSS) was a patriotic program used by the United States Treasury to help fund participation in World War I and World War II. The war effort required hundreds of millions of dollars in the currency of the time. To provide a means through which the government could borrow money from the citizens, this new and inventive way was introduced which appealed to the patriotic duty of a citizen. One by one, countries involved directly and indirectly in the two great wars began introducing such kind of stamps to support the diminishing economy. Now let’s have a look at some of war savings stamps: 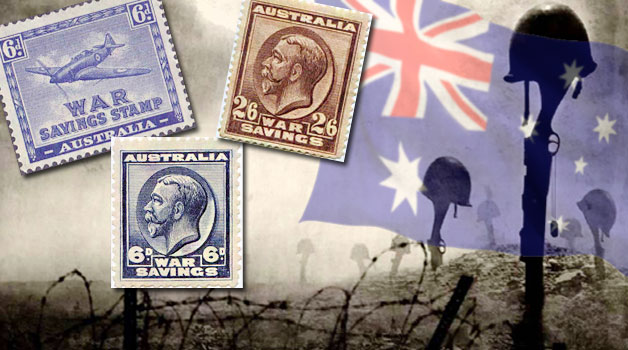 To encourage the participation of the average person during World War I, a fundraising scheme was introduced by the Australian Government in 1915. Two stamps of 2shilling and 6pence were issued along with a booklet having 35 blocks. When those blocks were filled, the booklet was accepted at any branch of commonwealth or post in exchange for a war certificate worth euro 1. The stamps bear a left-facing portrait of King Edward II.

With the outbreak of World War II, it was again necessary for the government to raise funds for the war. A new 6 pence stamp was introduced with similar kind of theme. Issued in the year 1940, this stamp depicts Boulton Paul Defiant aircraft. The stamp is popular by the name of WW2 6d Blue “Spitfire” stamp.

Similarly, in World War II, the United States Treasury Department began to issue a series of war savings stamps in late 1942. The war savings stamps introduced during World War II were released in five different denominations – 10 cents, 25 cents, 50 cents, one dollar, and five dollars, all featuring a Minuteman statue. These stamps were purchased at face value and earned no interest. Individuals accumulated their war savings stamps in various collection booklets provided with the purchase of a stamp. Filled collection booklets could later be used to purchase Series E war bonds which would be exchanged for a $25 on the maturity of ten years.

In December 1918, the Government of Canada authorized the issuance of War Savings Stamps. A 35 cent Thrift Stamp was introduced along with Thrift Card which had 16 spaces. Once those spaces were filled the Thrift Card could be exchanged for a War Savings Stamp worth 4 Canadian dollars. Along with this stamp, a War Savings Certificate with 10 spaces was given. When the Certificate is filled it will be worth 50 Canadian dollars on January 1st, 1924.

Further, in World War II the Department of Finance announced in April 1940 that War Savings Certificates would be issued again. This time Canadian Government issued a set of eight stamps each worth 25 cents. The stamps depict different stills captured during the wartime such as a) Navy officer and his ship, b) pilots and their aircraft c) both fighter plane and a battleship d) a tanker e) a bomber f) nurses on their duty to serve the wounded soldiers g) a soldier standing in front of some tanks and h) soldiers making a tank ready to launch.

Even children were asked to support the war effort. A child could buy War Savings Stamps for 25 cents each; after saving $4 worth of stamps and sending this form to the federal government, the child would receive a War Savings Certificate worth $5. 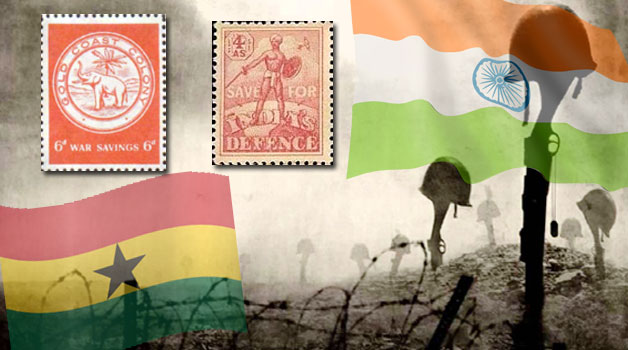 Being the colonies of Britain and hence, the part of British Empire countries like Ghana and India also issued War Saving Stamps. As India was one of the most prized possessions for Britain and the source for man, machinery, resources, and money during WWI and WWII, British Government came out with patriotic war labels encouraging people to save for India’s defense. British India issued set of 3 such patriotic labels under the name of “Save for India’s Defense” somewhere around 1941. The three different denominations were in Re1, 8 Annas and 4 Annas. The stamp shows a native soldier with a sword.

Similarly, War Saving Stamps were also issued in Ghana (then known as Gold Coast) which was a British Colony in West Africa. During World War Two, Gold Coast issued 1d and 6d war savings stamps. The stamps have the same design of an elephant with raised trunk on the background of the desert. The Vignette around reads “Gold Coast Colony” and the inscription “War Saving” can be seen at the bottom flanked between the denomination. The stamps were registered in 1943. Today few copies exist in Archives and Philatelic library.

The War Savings program was designed to attract the citizens of the country to invest a portion of their current income on a consistent basis. A fair amount of financial backing was raised during the War Time was generated through the ‘War Saving Stamps’. The schemes appeal the masses at personal level asking for their involvement to run their beloved nation in difficult times.