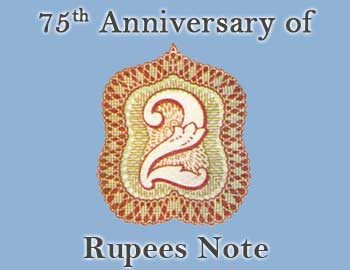 The Rupee that we keep in our pockets has a long and an interesting past. There is a long history of inventions, adaptations and modifications of Indian Currency from Barter System – Coins – Paper Money – Digital Currency! Among them, the paper money – which mainly constitutes Banknotes of Pre–Independence, and Post–Independence of India – has opened new gates of interest and research. After the Re.1 note stepped into a new century in 1917, it is time to give cheers to the Platinum Jubilee of the second smallest denomination of the India Currency Note i.e. Rs. 2 Note. The subsequent years marked many changes in the motifs and the appearance Two Rupees Note. Here’s the Tale of Rs. 2 Note!

Introduced by the British in19th century, the banknotes mark a transitional point of the Monetary System of India. The British introduced paper money in India during the 19th century through the Paper Currency Act of 1861 which gave the Government the monopoly to issue notes throughout the vast expanse of British India. Early banknotes issued by the British were of higher denomination. However, acute shortage of silver during the First World War led to the introduction of paper currency of smaller denomination of One Rupee and Two and a half Rupees. Subsequently, the exotic Two and a half Rupees and was withdrawn from the Circulation but the Re. 1 note was continued in circulation with many other modifications.

The Tale of Rs. 2 Note is quite interesting. The reason behind the issuing of the Rs. 2 note is not precise. However, between Re. 1 and Rs. 5 – which already was in circulation, there might have been a need of a mediator.

Whatever was the reason, the First Two Rupee Note was issued on 3rd March 1943.

Printed on machine-made white paper, it has RESERVE BANK OF INDIA on the top with “GAURNTEED BY THE CENTRAL GOVERNMENT” below it. O the obverse ‘Two/2/Rupees’ is seen in central denomination panel with the portrait of King George VI on the right. With the serial number below these notes are signed by the GOVERNER FOR THE RESERVE BANK OF INDIA. The reverse side depicts reserve Bank Of India in the centre with language panel consisting eight languages on the left side the RBI deal in the centre dividing two /Rupee and watermark on the right side.

Though India became Independent On 15th August 1947, the Initial years mark with the continued use of the old currency. The old Two rupees notes were removed from Circulation on 27th October 1957 in India. However, on the occasion of India Becoming a Republic, a new Two Rupees Note was issued.

On the obverse, the Emblem of India is seen in a vignette on right. The centre shows Reserve Bank of India and the Promise text Two Rupees’ in English and ‘Do Rupaya’ in Hindi in the central denomination panel and Signature of the Governor. On the Reverse, there is a logo of Reserve Bank of India it the centre – bottom topped with Language panel in the centre; Bengal tiger is seen in the Vignette on the left and Watermark window on the right. ‘2’ in Hindi is seen in the top left corner and in English in the top right corner.

This design remained constant till 1967. However, it underwent various minor and major modifications over the time. 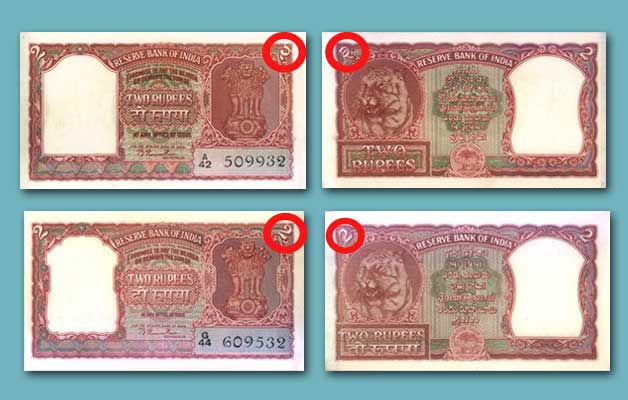 The Hindi Numeral at the top left and right corners was replaced with the English Numeral. (July 1951)

The Value in the Centre Denomination Panel in Hindi reads “Do Rupaya”, which was grammatically corrected to “Do Rupaye”. (Oct 1957) 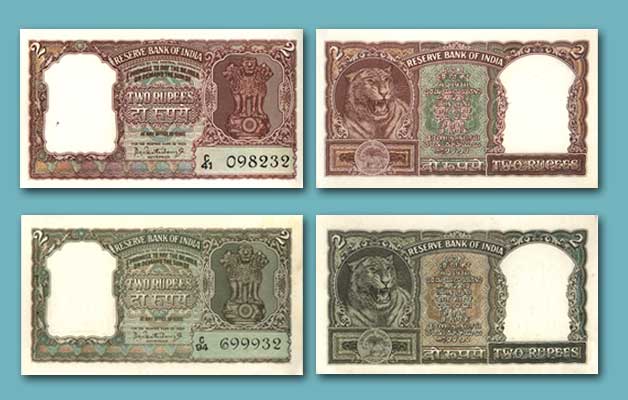 The Colour changes to Brown (July 1962) and olive Green (August 1965). The Bengal Tiger in the Vignette is now facing right as opposed to the earlier issues.

In April 1967 a completely new design was adopted and the size of the note was reduced as well.

The obverse of the new and improved note remains similar with few alterations such as 1) “a stylized RBI monogram over the watermark panel” 2) Two Rupees / 2 is the Central Denomination Panel and 3) Tine “Two Rupees / Reserve Bank of India / Bharat (In Hindi) is seen on a pedestal below the signature of the Governor. On the other hand, the reverse shows Standing Bengal tiger in the centre with “Reserve Bank of India’ above and the Logo below. Language panel can be seen in the left with “Do Rupaye” written in 13 languages. 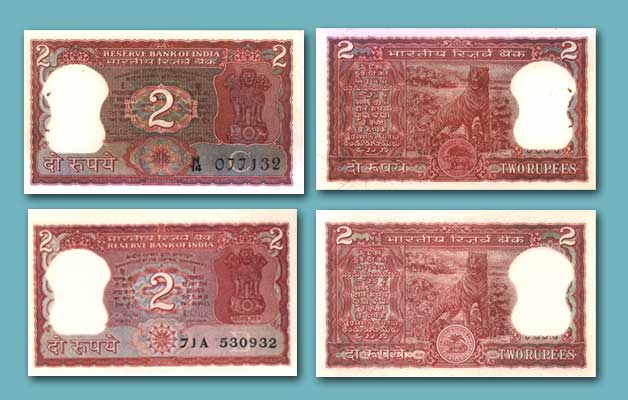 This type is marked with a different variety with a tiny change. “Satymeva Jayate” is now added below the emblem on the right panel of the Obverse. Hence, the pillar size is reduced to accommodate this change. (June 1984)

During next two decades, two more chapters were added in the Tale of Rs. 2 Note.

To honour the Birth Centenary of Mahatma Gandhi, a Note with a new design was introduced, which depicts seated Mahatma Gandhi reading a book at the Sabarmati Ashram Compound, Ahmedabad in the reverse. Minor changes also occur such as 1) Bharatiya Reserve Bank in Hindi and 2) RBI seal separating the denomination in Hindi on the left and English on the right. The obverse of this type also shows some modifications such as 1) ‘2’ in the central denomination panel flanked by Promise text in English and Hindi and 2) Reserve Bank Of India and Bharatiya Reserve Bank in the centre. 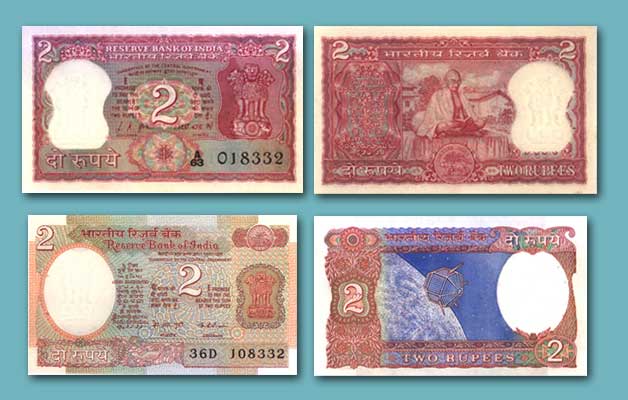 The last type issued in the year 1976, commemorates the satellite ‘Aryabhata’ Symbolising India’s achievement in Science and Technology which is depicted on the on the reverse. This release is marked with a decorative wheel in the central denomination panel and a caricature of a peacock beside serial number. Rest remains the same.

The other Two Rupees Notes

The Tale of Rs. 2 Note doesn’t end here! There are a couple of more Two Rupees dwelling in the History of Indian Banknotes.

1) The two rupees note bearing the Portrait of King George Vi was also continued use in Pakistan. When Pakistan was separated from India, The same note was being used in Pakistan which was overprinted with “Hukumat – e Pakistan in the watermark panel.

2) Another Important issue comes from the princely State of Jammu and Kashmir. The date of issue of these notes is not precisely said. But a Banknote with Two Rupee denomination was issued in the Princely State of Jammu and Kashmir. These unifaced Notes depicts “Shrikar” written in bold letters in the centre which has a seal of the Government of Jammu and Kashmir below it which reads “Muhr Shrikar Qilimaru Jammun”. The panel at corner bears a signature. The most peculiar feature of these notes is that they feature the date twice i.e. in the months of the Hindu calendar and Vikram Samvat.

The Tale of Rs. 2 Note ends with the Prisoner of War coupons.

Several Prisoner of War Camps were set up in India during the World War II for German, Italian and Japanese Prisoners of War. These camps were located in many parts of India. Coupons were issued by each wing of the camps which were authorized by Camp Commandant. Among these camps, the camps at Banglore and Ramgarh issued coupons with the denomination of Rs. 2. These Unifaced Coupons show “Prisoner of War” and “Camp” in the centre which had the value between them. They were stamped with the name of the territory. The purpose of these coupons was mainly to use inside the camps.

Gradually, Banknotes with the smallest denomination went out of use and were replaced by Coins. The 2 rupee coin was introduced in India in 1992 which has the Map of Modern India on the Reverse.