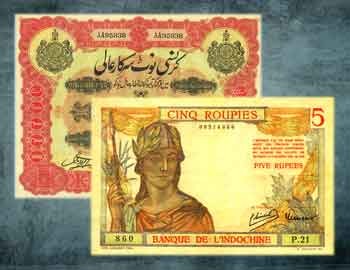 The Portuguese were the first amongst the western nations to establish sound trade relations with India after the arrival of Vasco da Gama at Calicut in 1498. They seized the territory of Goa in 1510 and enjoyed monopoly of trade with India for more than a century till the arrival of the Dutch and the English. They, however, retained the territories of Goa, Daman and Diu till 1961.

The first notes resulted out of the Anglo-Portuguese convention of 1880, by a provincial order No. 566 of 27th September 1882. Notes were made in London and started circulating in India later on. The first ‘Rupia’ denominated Indo-Portuguese issues of paper currency were issued around 1883. These colonial notes of India, issued in denominations of 5,10,20,50,100 and 500, featured the portrait of the King of Portugal. ‘Banco Nacional Ultramarino’ was given the responsibility of releasing paper money in India for the Portuguese held territories in 1906. The early notes carried the seal of the bank.

In 1917, new denominations of 4 Tangas, 8 Tangas and One Rupia and 21/2 Rupias were introduced. Most of them depicted the Commerce and Sailing Ships motifs and the others featured Indian symbols and motifs symbolizing architectural and exotic fauna. Later notes carried the portrait of Afonso De Albuquerque.

The Goan currency comprised of the Reis, the Tanga and the Rupia with one Rupia consisting of 16 Tangas. In 1959, the denominational unit was changed from Rupia to Escudos with one Escudo consisted of 100 Centavos. New Indo-Portuguese notes with the denominations of 30, 60, 100, 300, 600 and 1000 were introduced which were officially circulated till 1961.

Initially, the Portuguese always had an upper hand and posed as a threat for their aspiring French counterparts who wanted to establish trade relations with India and other Eastern nations. Finally during the reign of Louis XIV, in 1664, the French Minister of Finance named Jean-Baptiste Colbert was successful in establishing the first profitable French Company, by setting up factories in Surat and acquiring Pondicherry in 1674.

‘Roupie’ denominated French notes of India were issued for the first time in 1898. The Roupie was made of 8 Fanons and one Fanon was equivalent to two annas. Notes of 50 and 10 denominations were issued and 1 Roupie notes were issued just after the First World War. New 50 Roupies notes featured the bust of Dupleix, who founded the French Empire in India. Banque De l’Indochine issued paper money for the French in India, under decrees, which find mention on the notes.

Almost all banknotes issued by Banque De l’Indochine between 1876 and the Second World War were printed by the Bank of France. During the war these notes were printed in Hanoi by the Imprimerie d’Extreme Orient and in Japan.

After the Mughal Empire started crumbling down, Anglo-French rivalries began to capture as many territories as possible. The French lost most of its territories which were transferred to the Indian Union. Indo-French notes continued to be in circulation till they were replaced by Indian currency in 1954.

Mir Qamar-ud-Din, the Mughal Viceroy of the Deccan claimed an independent title Asaf Jah and founded the Princely State of Hyderabad.

The coins of the Nizams were issued in the name of the Mughal Emperor till 1858 after which new coins were struck independently called ‘Hali Sicca’, i.e., the current coins. The Government of Hyderabad tried to organise private bankers and local ‘saukars’ to set up a banking company which could issue Hyderabad paper money as well. The British did not allow this to happen. In 1918 though, due to the shortage of silver and due to Hyderabad’s and India’s contributions in the First World War, special Princely State paper currency in denominations of Rupees 100 and Rs 10 was issued under the Hyderabad Currency Act. These notes dated back to the ‘Fasil’ era. Unlike the ‘Hijri’ Calendar, it was Solar and the names of the months were Persian in origin.

In 1922, the P. & O. Liner S.S Egypt, coming to India carrying a consignment of unassigned notes of Rupees 100, 10 and 5, printed by Waterlaw & Sons for Hyderabad state, sunk in the Bay of Biscay. Since these notes were officially not retrievable, Hyderabad State asked htem to reissue them with different font types, making them duplicates. Later the real notes were retrieved by SORIMA company after 11 years.

For security reasons, after the setting up of the India Currency Notes Press at Nasik, Hyderabad notes were printed there. The Osmania Sicca was demonetised in 1959. After the reorganisation of states on a linguistic basis the State of Hyderabad was also dissolved.

During the reign of Maharaja Ranbir Singh, in 1877, paper money was issued In Jammu and Kashmir. These Pre-Republic Princely State notes of India were not very popular and were in circulation for a very short period. The notes carried the ‘Sun’ motif of the Dogra family and the word ‘Shrikar’. They bear the signatures of Diwan Kripa Ram as the chief signatory and other officials

While the Government of Kutch had prepared specimens of currency notes, these were not issued.