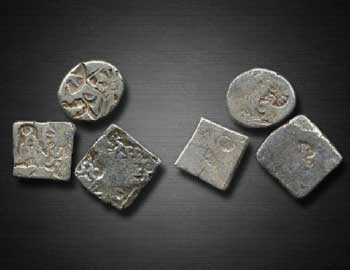 These little pieces of metal struck with different designs each tell a story. They have evolved of a period of many centuries. Coins in India were first struck c. 6th century BCE. They were also one of the first coins to ever be struck worldwide. But what happened before that? Why was the need for coins felt? What did people use before the advent of coins?

To trace the origin of coins, we must look back into the remote past where man had limited needs. As his social interaction and communication grew, families grouped together to form tribes or communities. Each tribe or community had a monopoly over the products that were available in their region. As interaction grew between tribes and communities, products available in other territories were discovered. This discovery paved the way for trade.

In its infancy, trade was practiced as an exchange of products – something we call Barter. Similar to the way children trade collectible cards or marbles and stamps, or like I did as a child, tazos; tribes, communities and merchants exchanged grains, sugar, and many other products. Exchange of products became a necessity as communities grew into localities and slowly into towns and cities.

The Barter system is a great mode of payment, but it works only if the commodities being exchanged are of the same value. Would you barter a pound of sugar or rice for a cow? I wouldn’t. People began to look at other modes of payment and decided that a common commodity would serve as an intermediary medium of exchange, as ‘money’. As time went by, certain commodities gained preference over others and were assigned higher values. They were slowly given the status of ‘money’ and became a standard to which the value of other things was measured.

Harappa gives us a sneak peek into banks and treasuries being operated at the time. The Indus-Saraswati Civilisation was one of the oldest and largest civilisations in the world. Their sophisticated town-planning and modes of operation are legendary. Archaeological evidence obtained from excavating Harappa and Mohenjo Daro revealed the presence of huge buildings which seemed to be used as granaries that housed state tribute and fulfilled in the state economy, thereby functioning as a modern bank or treasury.

In the Vedic Age, pastoral communities used cows as a medium of exchange. A passage from the Ṛigveda mentions the value of an image of Lord Indra as being ten cows. Other passages also mention the value or treasure as cows. The Aitareya Brāhmaṇa also equates wealth with cows. Many instances in later Vedic literature also mention that the Dakshiṇā or fees to the priest was paid in cows. Ashṭhādhyāyī compiled by Pāṇini even later in the Post-Vedic period mentions cows as the medium of exchange. According to the literary source, purchase was sealed by means of gopuchcha which literally translates to ‘cow’s tail’. It probably finds its origins in the practice prevalent at the time where cattle were handed over by their tails. 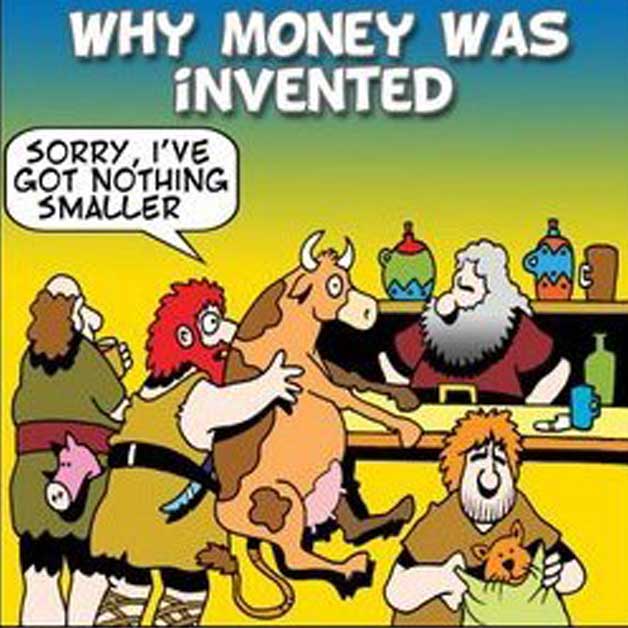 This practice of using cows as a medium of exchange, perhaps, met the needs of the age. The animals did not perish as quickly as food grains or agricultural products did. They could multiply and supply milk. They could also be put to work. However, as a method of payment where purchasing power could be accumulated, cows required care. They need someone with the skill and knowledge of animal husbandry. Also, they could not be used for purchases of a small amount, nor could you divide them to pay for it. As they were not suitable for all transactions, a stable, divisible, and a more convenient means of exchange was required.

At one point in history, shells and beads were used as a medium of exchange. They were small and easily divisible for purchases of lesser values. It was easy to carry on your person without adding substantial weight. One could be discreet and inconspicuous to the amount of money they owned; something that was not possible with cows. Cowry shells came to be a popular medium of exchange. Broken and whole cowry shells were used. Whole shells, naturally, held a higher value than broken ones. Cowries, soon, came to be equated with money. You may have heard the Hindi phrase ‘Phooṭi Cowḍie’ which refers to broken cowry shells as the smallest denomination.

The problem with using beads and shells was that they were found in plenty and beads could be manufactured by anyone possessing the apparatus. It posed a risk to the economy of the region, as a result of which, a suitable replacement was sought.

Metal is durable and handy. It could make for a stable medium of exchange and would serve as the perfect replacement for commodity and shell money. But simply discovering the metal was not enough. To serve the purpose of being a perfect medium of exchange, metal would have to be divided to pieces bearing uniform weight and size. As a result, they were weighed on a balance against a standard weight. Seeds were found to be suitable thanks to their uniform size and weight. The types of seeds used for measuring varied according to region depending upon their availability.

But imagine having to weigh metal bits each time you make a transaction. The process becomes tedious. Humans look for convenience which gives birth to technology. The wheel, for instance, was born not out of necessity but for the convenience of man who would haul huge stones or would travel across land. Similarly, to overcome the inconvenience of weighing metal each time a transaction took place, people began to standardize the weight and size of the ingots.

Another issue with using metal was that although the ingots were standard in weight and size, there was no guarantee of its purity. To address this issue, responsible authority figures, possibly merchants and traders, began marking the pieces as a sign of guarantee of purity. This practice gave birth to the concept of a coin. The concept caught on well. People found it easier to accept metal pieces with privy marks and slowly, coins with punches and symbols began to be issued.

The value of coins depended on the integrity and image of the person authenticating them. If merchants and traders did authenticate these primitive coins, they only held influence in their own territories. Regardless of how coin authentication began, authorities above all challenges took control of issuing coins.

The first coins in India, and consequently all over the world, were minted c. 6th century BCE. Vedic literature mentions the term ‘hiraṇya’ which translates to ‘gold’. This led to the misconception that the first coins minted in India were gold ones. During the Vedic Age, it simply meant ‘metal’ and came to be associated with gold much later. Definitive archaeological evidence points to silver being used to mint the first coins and not gold.

Vedic literature mentions many terms for specific metals such as rajata for silver and pīta(yellow) or suvarṇa(nice-looking) for gold. Hiraṇya denoted metal in general over the specific metal, gold. It also denoted ‘cash’ in the context of payment and transactions. The term ‘nishka’ was most probably used as a generic term for the metal ingots used as currency and was a symbol of wealth. Nishka is mentioned in the Vedas and Upanishads.

Coins in India have evolved over the ages. Going from being struck with single punches, metal has been cast into coins, die-struck, and have been minted in repoussé. From using precious metals such as gold and silver, coinage have evolved to a point where people use token currency in the form of stainless steel coins, paper money, and even plastic and digital currency.

The people who struck the first coins probably never imagined how money would evolve over time. This makes me wonder how money will evolve in the future. What next after digital currency?