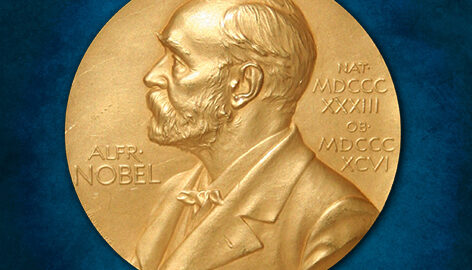 We all have heard of Nobel Prizes and the Nobel Prize winners too. Winning a Nobel Prize is a life-changing honour. Whether the laureate is an internationally known figure or a scientist or an activist plucked from obscurity, the award brings with it worldwide recognition that highlights one’s life work and provides the funds to continue and further the mission. In this blog, we will trace the Nobel Laureates on Stamps. But before we go into it, let’s know more about Alfred Nobel and how and why he started these awards in the first place.

Fame can be a burden, depending on how you make your name. Take Alfred Nobel. We now associate Nobel with international prizes for peace, science, and literature, but during his life, he was dubbed the “angel of death” by the press.

It all started when a French newspaper printed about Nobel’s death by mistake. In April 1888, Alfred Nobel read about his own death and read a headline that made him ponder over his legacy. The newspaper read stuff like, “The merchant of death is dead,” and described him as a person who “became rich by finding ways to kill more people faster than ever before.” These words or opinions about him made Alfred ponder over the public opinion that he would be leaving behind. Alfred Nobel, the man who invented dynamites, wanted to be forever tied to humankind’s highest achievements, and not its destructive potential.

In 1895, Nobel sat down in a club in Paris and, in handwritten Swedish with no help from a lawyer, penned a four-page document that would become one of history’s most notable last will and testaments!

He left 31 million Swedish kroner (equivalent to about $250 million today), the bulk of his estate, to be invested and the interest from which given “in the form of prizes to those who, during the preceding year, shall have conferred the greatest benefit on mankind.” Four random gentlemen at the club were asked to witness the document, which now resides in a vault at the Nobel Foundation in Stockholm, and the rest is history!

The following year Alfred Nobel died for real and with his will became a man who was no longer linked to death and destruction, but would forever be associated with progress, peace and the very best in human achievements…Such an inspiring story of introspection and determination.

Since the establishment of the Nobel Trust in 1901, a total of approximately 603 prizes to 962 laureates (as of 2020) have been awarded. As the title of the blog suggests, we are going to discuss the Nobel Laureates that are depicted on Stamps.

Here is a list of 4 Nobel Laureates on Stamps!

First among the Nobel Laureates on Stamps is Howard Florey, an Australian pharmacologist, and the pathologist born in Adelaide in 1898. He is considered to be one of the greatest scientists. Howard Florey shares the 1945 Nobel Prize in Medicine with colleague Ernst B. Chain and Alexander Fleming for the discovery of penicillin and its curative effect in various infectious diseases.

Florey studied medicine at Adelaide and Oxford University until 1924. He was appointed professor of pathology at Sheffield and then at Oxford. He also served as president of the Royal Society.

Fleming first observed the antibiotic properties of the mould that makes penicillin, but it was Chain and Florey who developed it into a useful treatment. They were conducting the first-ever clinical trials of penicillin at the Radcliffe Infirmary in Oxford in 1941. Following World War II and the work of his research team in North Africa, penicillin came into widespread clinical use.

Florey’s discoveries, along with the discoveries of Fleming and Ernst Chain, are estimated to have saved over 200 million lives, and he is consequently regarded by the Australian scientific and medical community as one of its greatest figures. Sir Robert Menzies, Australia’s longest-serving Prime Minister, said, “In terms of world well-being, Florey was the most important man ever born in Australia.”
Sir Howard Florey died on February 21, 1968. To celebrate his achievements, the Postal Department of Australia issued a 60 cent special stamp depicting Florey’s portrait. 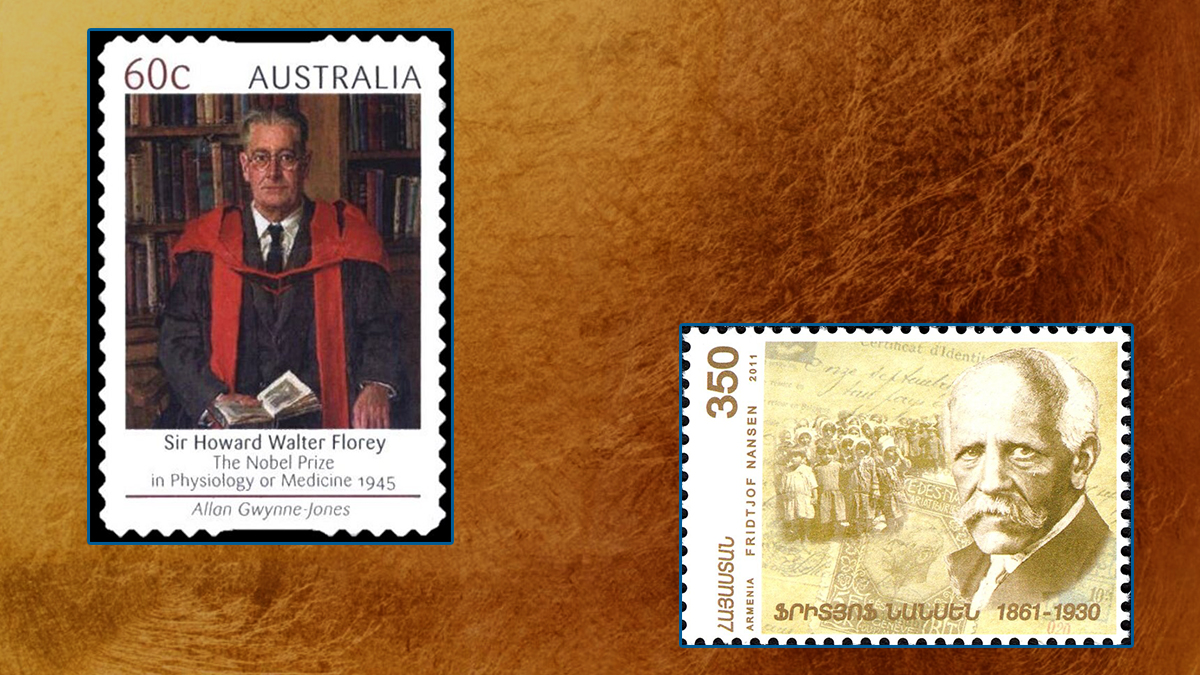 Fridtjof Nansen was Norwegian explorer, oceanographer, statesman, and humanitarian who led a number of expeditions to the Arctic and oceanographic expeditions in the North Atlantic. For his relief work after World War I, he was awarded the Nobel Prize for Peace (1922).

He led the team that made the first crossing of the Greenland interior in 1888, traversing the island on cross-country skis. He won international fame after reaching record northern latitude of 86°14 during his Fram expedition of 1893–1896. Although he retired from exploration after his return to Norway, his techniques of polar travel and his innovations in equipment and clothing influenced a generation of subsequent Arctic and Antarctic expeditions.

In the final decade of his life, Nansen devoted himself primarily to the League of Nations, following his appointment in 1921 as the League’s High Commissioner for Refugees. In 1922 he was awarded the Nobel Peace Prize for his work on behalf of the displaced victims of the First World War and related conflicts.

In 2011, to commemorate the 150th birth anniversary Fridtjof Nansen, this stamp was issued.  They are both listed in the “Armenian Stamp Catalog as numbers 85 and 544. It is an incredible specimen in Nobel Laureates on Stamps series.

Richard Adolf Zsigmondy was an Austrian-Hungarian chemist known for his research in colloids, for which he was awarded the Nobel Prize in Chemistry in 1925. The crater Zsigmondy on the Moon is named in his honour.

He was born on 1st April 1865 in Vienna, Austrian Empire, to Hungarian parents Irma Szakmaryand and Adolf Zsigmondy Sr., a scientist who invented several surgical instruments for use in dentistry.

In 1925, Zsigmondy received the Nobel Prize for Chemistry for his work on colloids and the methods he used, such as the ultramicroscope. Here is an image of a stamp honouring Dr Zsigmondy, issued by Austria in 1979, within the series of Nobel Prize Winners. 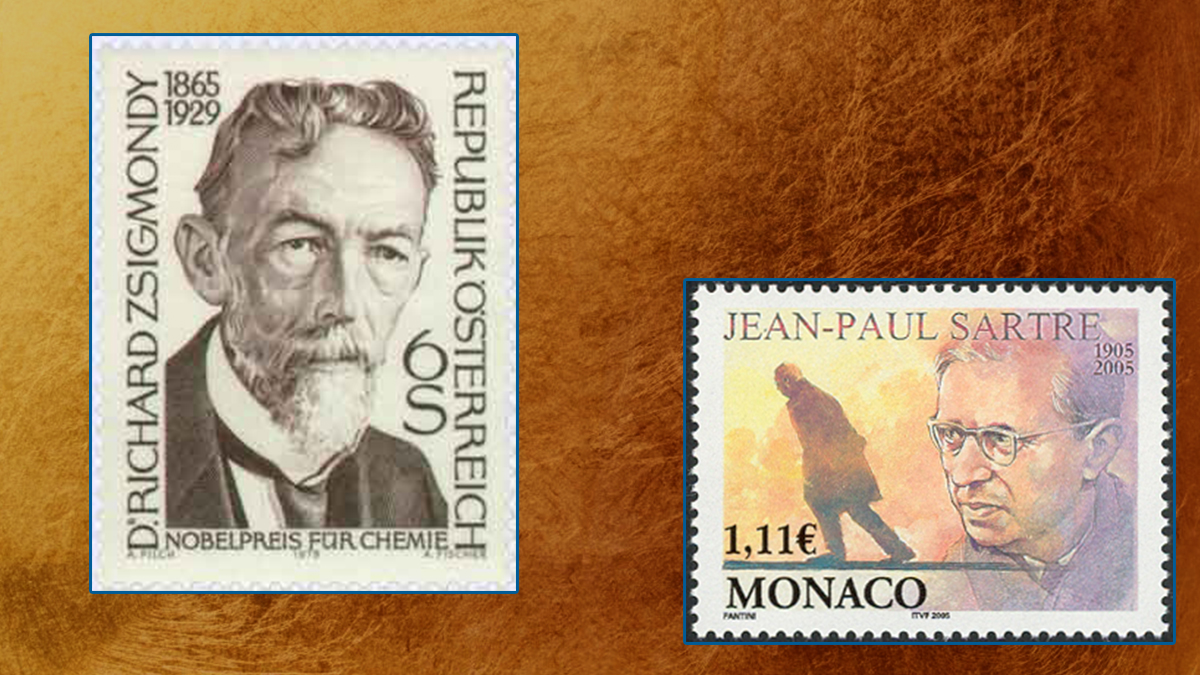 Last but not least of Nobel Laureates on Stamps is Jean-Paul Sartre who was a French novelist, playwright, and exponent of Existentialism—a philosophy acclaiming the freedom of the individual human being. He was awarded the Nobel Prize for Literature in 1964, but he declined it.

Jean-Paul Sartre was born on 21 June 1905 in Paris as the only child of Jean-Baptiste Sartre, an officer of the French Navy, and Anne-Marie (Schweitzer). His mother was of Alsatian origin and the first cousin of Nobel Prize laureate Albert Schweitzer, whose father Louis Theophile was the younger brother of Anne-Marie’s father.

He was one of the key figures in the philosophy of existentialism and phenomenology, and one of the leading figures in 20th-century French philosophy and Marxism. His work has also influenced sociology, critical theory, post-colonial theory, and literary studies, and continues to influence these disciplines.
To honour him Monaco Postal Department has issued a commemorative stamp of value1, 11 Euros. It depicts his portrait on a foreground.

We have so many more Nobel laureates that have been commemorated on stamps. We will discuss them in our future blogs. Stay tuned to know more about the Nobel Prizes and prize winners as well! Hope you enjoyed this blog Nobel Laureates on Stamps…