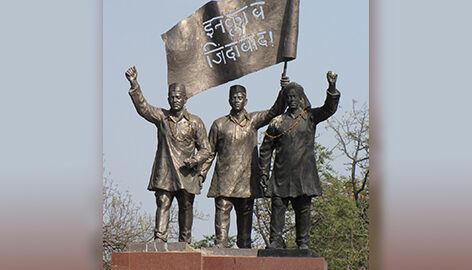 Bhagat Singh, Sukhdev Thapar, and Shivaram Rajguru were great Martyrs of India of all time and are deeply rooted in the hearts of all Indians for fighting against Imperialist British. They could have chosen comfort and luxury and worldly desire but they have chosen gallows with a smile for the people of their motherland. They have rightly stated that the British can only kill individuals but cannot kill the ideas. 23rd March is observed as Shaheed Diwas or Martyr’s Day across the country to pay homage to the unforgettable Martyrs of India.

Martyrs of India – Bhagat Singh: He was born in 1907, Punjab province of British India, presently in Pakistan. His family members were active in the Indian independence movement. Co-incidentally, his two uncles and father were released from British jail on his birth. His valour and love for the common masses can be seen from the episode of Jallianwala Bagh massacre. He was just 12 years old when thousands of unarmed gathered people were killed by the British. He visited the site and filled the bottle with blood-soaked mud as a token of tribute.

He joined National College in 1923 where he read enormously and participated in extra-curricular activities like the dramatics society. He was inspired by Giuseppe Mazzini movement and established ‘Naujawan Bharat Sabha’ in March 1926. Later, he joined the Hindustan Republican Association which was comprised of prominent leaders of that time such as Chandrashekhar Azad, Ram Prasad Bismil and Shahid Ashfaqallah Khan. In 1928, he changed the name to Hindustan Socialist Republican Association [HSRA]. In order to avoid marriage, he ran away and left a letter which stated, ‘My life has been dedicated to the freedom of the country’.

He wrote for Urdu and Punjabi newspaper from Amritsar, pamphlets for Naujawan Bharat Sabha, Kirti journal of Kirti Kisan Party and Veer Arjun newspaper published from Delhi.   While protesting against Simon Commission, Lala Lajpat Rai was assaulted from lathi charge by James Scott. Therefore, Bhagat Singh, Rajguru, Sukhdev and Chandrashekhar conspired to kill Scott as revenge. However, John P. Saunders mistakenly identified and shot dead. The act made them popular among youths; innumerable songs were made and became a symbol of resistance.

In 1929, anti-people bill such as Public Safety Bill, and the Trade Dispute Act was rejected by the Assembly due to the protest against them, but Viceroy enacted the bill by using special powers. In response to this, Bhagat Singh and Batukeshwar Dutt threw two bombs into the Assembly chamber at a vacant place. The smoke from the bombs created confusion which probably can help them to escape. Instead, they shouted slogans ‘Inquilab Zindabad’ and threw leaflets. Eventually, they were arrested and sentenced to life imprisonment.

He regarded Kartar Singh Sarabha, the founding member of the Ghadar Party as his hero. He was attracted to anarchism and communism. He dreamt of social reconstruction on new as per to Marxist basis. He clarified from his writing that anarchism means the absence of a ruler and abolition of the state, not the absence of order. It also means the elimination of the Church, God and Religion; the state and Private property.

In one of the court trial he and his associates wearing red scarves, raised slogans such as ‘Long Live Socialist Revolution’, ‘Long Live Communist International’, ‘Long Live People’, ‘Lenin’s Name Will Never Die’, and ‘Down with Imperialism’.  Bhagat Singh not just fought against the British imperialist power when he was free but he continued his struggle for the same from the jail with his associate. He declared an indefinite hunger strike for treating white in a better way than native prisoners and demanded to be recognised as ‘political prisoners’. The strike lasted for 63 days. 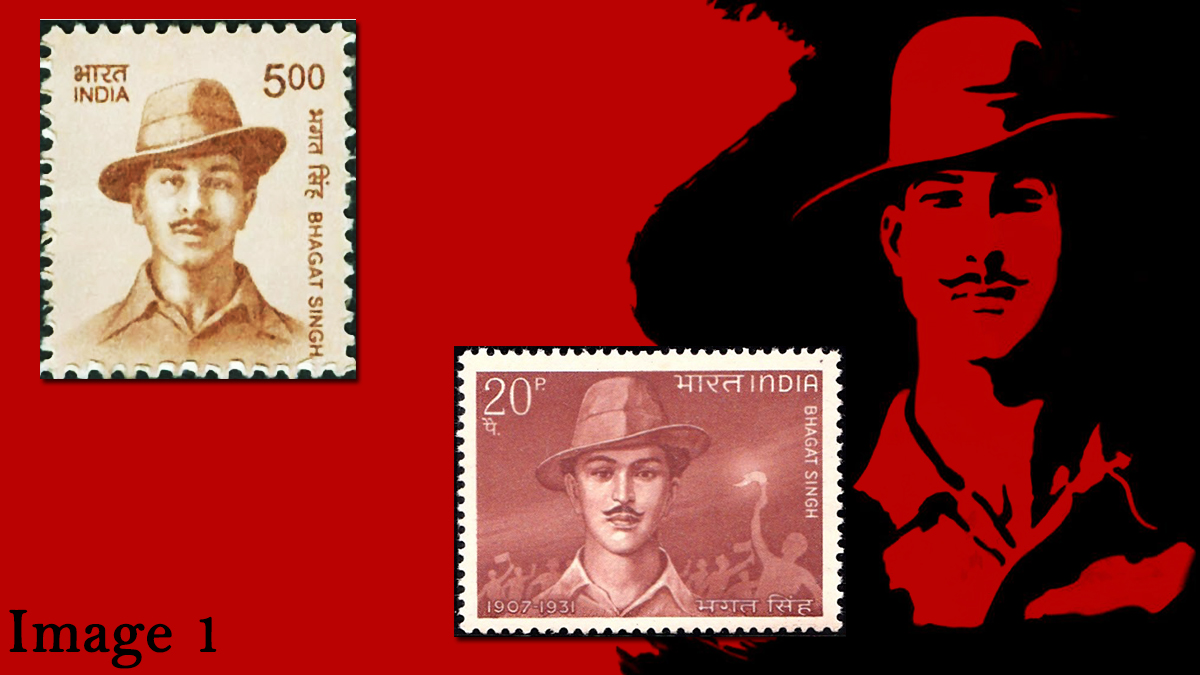 The image comprises definitive and commemorative stamps of Bhagat Singh worth 5 rupees and 20 paise respectively. The first stamp was of 2010-2019 series and other was issued on 19th October 1968.

Martyrs of India – Sukhdev Thapar: He was born in Ludhiana, Punjab. After his father’s death, he was brought up by his uncle Lala Achintram. He was chief of Punjab unit of HSRA. He was prime accused in the Lahore Conspiracy Case of 1929 whose name was the title by British as ‘Crown versus Sukhdev and others’. The special magistrate in April 1929, mentions him as a prime accused. He was involved in the assassination of Saunders along with Bhagat Singh and Shivaram Rajguru.

He was hanged with his other revolutionaries’ associates Bhagat Singh and Shivaram Rajguru in Lahore jail on 23rd March 1931. Their bodies were secretly cremated at the banks of the Sutlej River. A constituent college of Delhi University is named after him as Shaheed Sukhdev College of Business Studies in 1987. At his birthplace, Ludhiana, bus stand is named in his memory as Amar Shaheed Sukhdev Thapar Inter-State Bus Terminal. National Martyrs Memorial is established at Hussainiwala where they were cremated. Every year, on 23rd March, Shaheed Diwas is observed at this memorial. 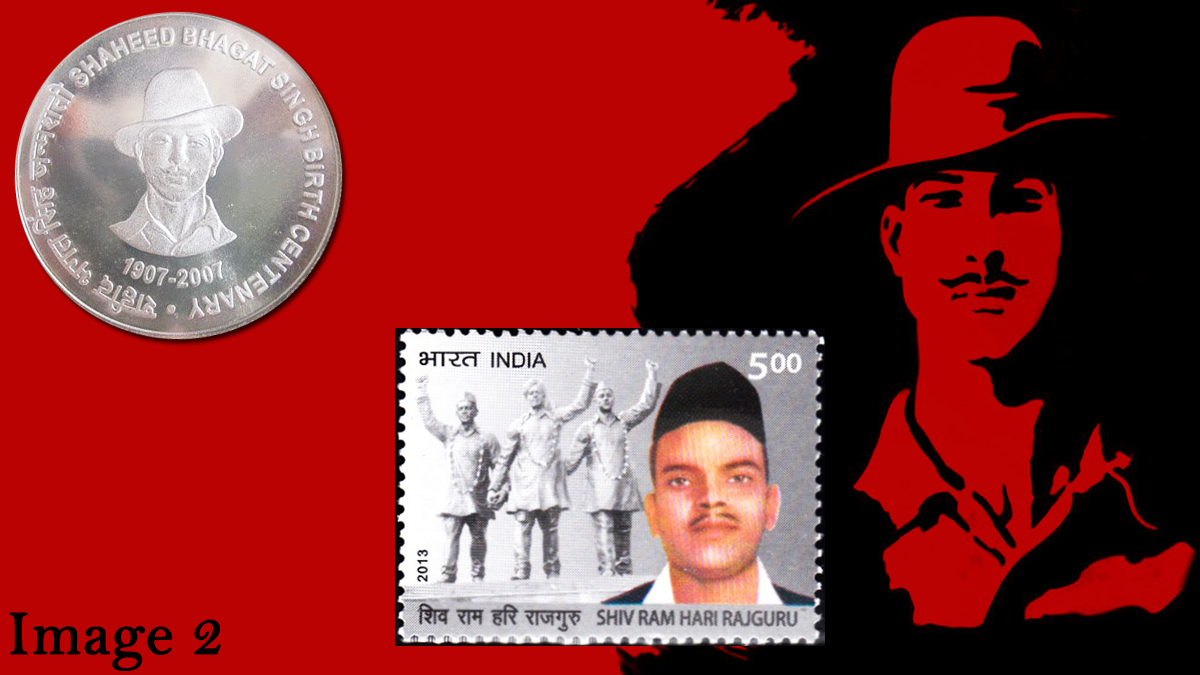 Martyrs of India – Shivaram Rajguru: He was born at Khed, near to Pune to Parvati Devi and Harinarain Rajguru. He was a member of HSRA and dreamt with his comrades of free India. He also took part in the assassination of a British police officer, Saunders as avenging of Lala Lajpat Rai’s death. He was executed with two other revolutionaries on 23rd March 1931.

In his honour, his birthplace Khed is changed to Rajgurunagar. Presently, Rajgurunagar comes in Khed tehsil of Pune district, Maharashtra. His ancestral home is turned into a memorial museum. A constituent college of Delhi University was named after him as Shaheed Rajguru College of Applied Sciences for Women.