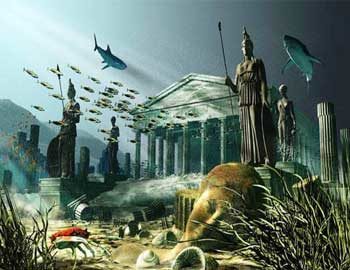 Enigma, riddle and unexplained secrets, the mysteries of the world have returned to make you more curious about the unsolved phenomena. It is hard to believe in the existence of these events, due to the lack of evidence that make people suspicious and curious. These mysteries are popularised by the government by illustrating them on their coins and stamps.

There are many such phenomena illustrated, but only sixteen of these events are widely known and popular among the people. Part one of these sensations cover events of Marie Celeste, lost island and much more. In this second part the marvel of Egypt, mysteries of Stonehenge, unknown art is further explained and analysed.

To know more about them, we have to commence on the journey of uncertain and unresolved events through the clues embellished on the coins and stamps. There will be many unanswered and answered questions. 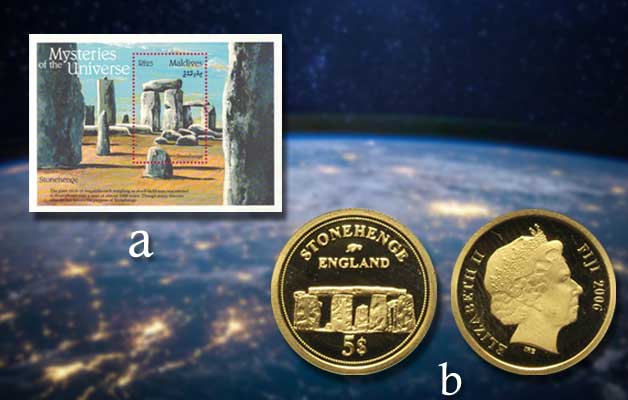 Circle of Menhirs: the Stonehenge

In the wild terrains of Wiltshire on the high lands of England stands a ring of stone identified as the prehistoric monument called Stonehenge, the ring of standing stones. It is also known as the “circle of Menhirs” meaning single standing stones. This monument is dated back to 3000 to 2500 BCE by Radiocarbon dating. It is the most famous megaliths in the world and is owned by the crown. The arrangement of the stone portrays the astronomically significant, it is still being explored.

Many stamps and coin are issued to illustrate this holy and historically important place of prehistoric times. In the above-shown image a represents the standing stones of Stonehenge on a stamp issued by the Maldives Post.

On the five dollars of Fiji stamp/ coin issued in 2006, Stonehenge (image b) is shown on the reverse side on the coin. The United Kingdom and Australia joint issue illustrated Stonehenge to mark World Heritage Day.

The miracle of Egypt: Pyramids of Giza

More than forty centuries, this man-made marvel has amazed and mystified mankind. These pyramids which are standing at the end of the desert at the west of river Nile are said to be built by Pharaoh Khufu. The above-shown image-a depicts the three famous pyramids of Cheops in the centre, Chephren on the right and Mycerinus in the left.  The Great Pyramid of Cheops alone contains more the two million stone cubes weighing around 2 ½ to 15 tons.

These marvels of Egypt are also illustrated on the five Piastres (image b) of Egypt issued in 1984. The Pobjoy UK mint also issued an amazing and technically unique coin depicting these three pyramids. It is issued on ultra high relief with sand of Egypt desert in it.

The pyramids are also adorned on many stamps from around the world. The Maldives Post issued a stamp in 1993 as the part of the Mysteries of Universe. 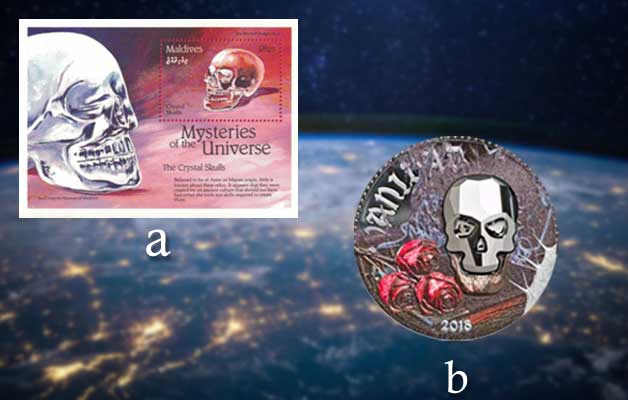 The famous skull from the Indiana Jones movie, the kingdom of the Crystal Skull has made many people mystified and curios behinds its origin. Carved thousands or even tens of thousands of year ago by an ancient Mesoamerican civilization, little is known about these crystal skulls. The knowledge they possess and technique used for its making shouldn’t be known to the people at that time, this question has made this Skull an immensely studied subject. Many relics of these skulls are created in the countries like China, Brazil and Germany.

Maladies Post issued stamp illustrating this Skull on it. This stamp was issued in 1993 as the part of Mysteries of the universe series. The Coin Invest Trust adorned this shinning crystal Skull on the silver coin. The notion of this coin is vanity that everything born must die. The skull is very special in this coin, the upper part is made of Swarovski crystal and the jaw is struck in high relief. 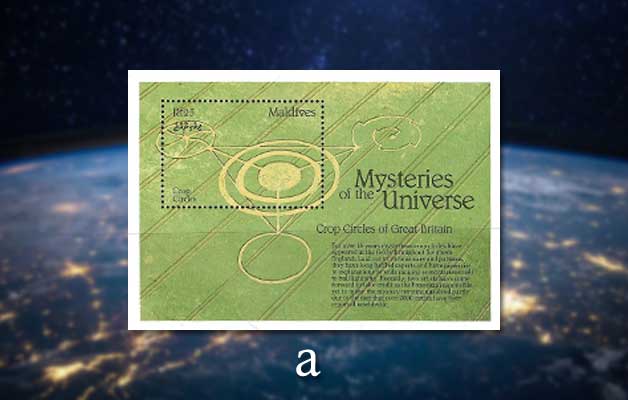 Art on the Fields: Crop circles of Great Britain

The designs on the fields of Great Britain are imagination and talent of an amazing artist or something else; there are not many specific answers for this piece of art. In different shapes and sizes illustrating the different pattern, it’s a brilliant masterpiece that baffled the world with its mysterious appearances. Many claimed it was the alien invasion; some said supernatural force’s activities. Till today the creator of this different design is unknown.

This beautiful masterpiece is shown on the stamps of the Maldives post as part of the Mysteries of Universe series. They have printed one of the most beautiful designs on it.

These kinds of designs also appeared in many parts of the world. A few years later two artists claimed to be the makers of these designs, but yet many facts were not accurate. How two people can make so many designs, t is still one of the biggest mysteries of the world! 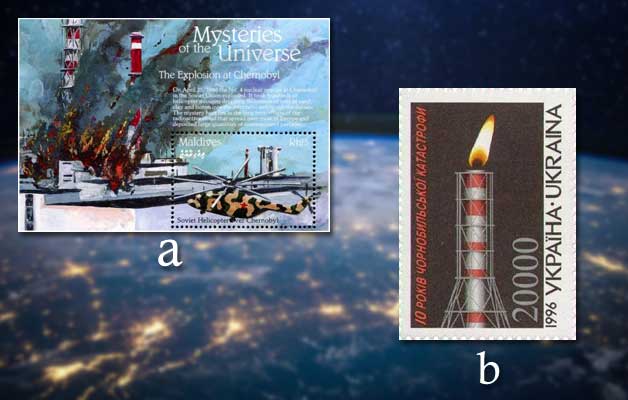 In the border town of Pripyat, Ukraine after midnight an experiment was going to be conducted at the Chernobyl nuclear power plant. They wanted to find an alternative way for the cooling of the RBMK reactor after the energy shutdown.

During this process, an EPS-5 the trigger of this explosion was pushed to stop the process in an emergency.  In the explosion took place in epic proportion, many people lost their lives. The whole town and adjacent villages were evacuated. Many helicopters (image a) were used to put off the fire generated by the explosion.

This unknown disaster made a vital place in the mysteries of the world due to its uncertain and catastrophic outcomes.

The Nazca lines are different figures created on the vast dry land of Peru. The larger figures of this line are around 370 m long. The figures are a mixture of a complex geometric figure or straight lines and shapes.  It consists of around 100 figures and 70 or more are zoomorphic figures.

There are stamp and coin depicting this amazing creation of the ancient Nazca people. Maldives Post issued a stamp (image a) illustrating the zoomorphic figures. There is also a coin illustrating these designs on the Peru coins (image b), it depicts a line drawing in the shape of a bird.

The journey of this mysteries series ends here, there are many fascinating facts attached to them that can be further explored. The adventure that a personal experience to study and explore these secret events is an experience worth experiencing.

These mysteries series are like the many secrets of nature that are unknown to the mankind. We know they exist but we can find its origin. Like the games of discs, the probability and the evidence of these events are uncertain. There is no definite connection between this disaster and phenomena to a specific line of events. Many organisation and government bodies are not able to answer how these events came to be. There are never-ending question-related to this mystery, but one thing is certain we have just started to understand them.