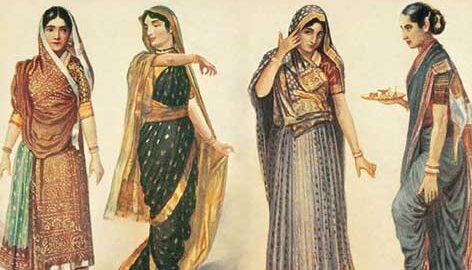 “The Joy of dressing is an art”-John Galliano! Half a century ago, an individual’s caste, creed and geographical location could be traced through his attire. For people around the world, clothes are not just basic need but it’s a way to express their culture and ethnicity. Globally, Fashion is the most popular mode of expression. The most fascinated spectrum of fashion is women’s clothing. The sari in Indian Couture are numerous, they are fashioned differently by different women from every segment of Indian society. To mark this phenomenal development in the traditional and cultural quote of Indian culture India issued a series of stamps depicting Myriad Saris on Stamps.

As the Part of Parsi traditional attire, Pasi women wear a Gujarati sari but with their own quirks. Unlike Gujarati women, Parsi females always bring the pallu down over the right shoulder and not the left.

The traditional Parsi Sari is made of an embroidered fabric called Gara. Parsi Gara embroidery was a turning point in introducing pagodas and chinamen motifs in embroidery rather than peacocks and paisley. The Gara is worn after the Sari Perwani ceremony or sari wearing ceremony. The Parsi bride wears white ornamented Gara sari which is generally a family heirloom

India Post issued a beautiful stamp illustrated the beautiful lavender Gara sari in 2019. The stamp is the part of the series Myriad Saris on Stamps.

The immigrants from Patan, Gujarat and Rajasthan are Pathare Prabhu, they came to Mumbai in the 13th century and are also among the first inhabitant of Mumbai. Their dressing was inspired by the English fashion trends of their time. The Pathatre Prabhu women fashion their blouses with English puffed sleeves and wore with their Kasbis- a nine-yard sari of satin with the fascinating pure border of gold and silver. It is considered as an innovative way to sustain their old tradition with new trends.

It is so popular that even today this trend flows with its twist. It shows a phenomenal balance between the old and the new. In 2019, India Post issued a beautiful stamp illustrated a beautiful nine-yard sari with a puffed blouse. The stamp is the part of the series Myriad Saris on Stamps.

It takes one step to set the trend which other starts following. The story of Brahmika sari is also the same. As one can see, the upper class in the 18th century of India was both influenced by and involved with the European circle. The social reform that followed has a great impact from Bombay to Calcutta by the eminent families. Jnanadanandini Devi, belonging to the famous Tagore family was deeply influenced by such changing and newly introduced style of sari while living in Bombay. This required her to dress differently from which the traditional Bengali style of wearing sari has emerged. It is said while in Gujarat with her husband, Jnanadanandini improvised upon the sari worn by the Parsi women. She created her style by draping the Pallu over the left shoulder- so the right hand is free for socialising.  The blouse was intricate and beautiful with high collars attached with ribbon, frills, jabots and brooches which were popular in the 1870s.

This sari was called Thakurbaria sari- ‘a sari is worn by the Tagore’s (a leading Brahmo family) and was supported by the Brahmo Samaj. Hence, more and more Brahmos started wearing the sari in this manner; it came to be popularly known as the Brahmika Sari through India.

India Post issued a stamp depicting a Bramos lady wearing the stylish and elegant Brahmika sari on the stamp in 2019. The stamp is the part of the series Myriad Saris on Stamps.

Encouraged and worn by the first lady of Bollywood – Devika Rani who made the sari a trend that has revolutionised the fashion trend in Hindi cinema till today. Devika Rani’s attire in both films and real-life was considered ‘risque’ at that time. The 1940s was an emerging decade of fashion in the movies and Devika Rani epitomised the essence of the 40s style with neat hairdo, Jewellery, frill and a fancy sari. Bollywood and sari had gone hand in hand over the years. The Bollywood actresses have always reinvaded the sari and lent glamour to this Indian wear.

India Post issued a stamp depicting Devika Rani in her elegant sari-popularised as a Bollywood sari on the stamp in 2019. The stamp is the part of the series Myriad Saris on Stamps. Sari is the traditional essence wore by Indian women in day to day life or on many occasions. It is a trend; it is also considered formal attire. It is the most essential garment that’s the part of Indian traditional wears. Today sari is the symbol of traditional wear in India but thousands of years ago it was a cloth just for draping, which can be traced to the Indus Valley civilization. The slow and updating trend is seen in the different phases of the development of sari. Most of the changing sari trend can be seen in the 18th century when would was changing at a rapid phase. What we see today is most updated yet the most simple form of the sari, worn in different forms and types all over India.