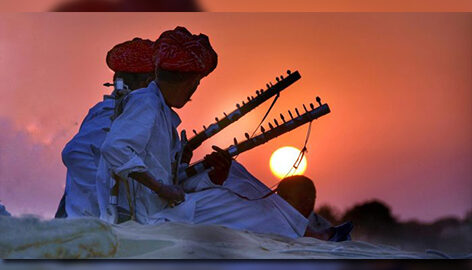 India is known all over the world for her rich musical history that was originated since ancient times. People in India have been worshipping Goddess Saraswati, who is known for knowledge and wisdom of music since immemorial times. From the Vedic age to today, classical music has been always sustained and played a pivotal part in moulding the journey of Indian music. An integral part of the Indian classical music is the Indian classical music instruments. These instruments have not only given us memorable music but many famous Indian musicians who have represented India on the world stage. Today in this blog we will explore the Fascinating Musical Instruments Featured on Indian Stamps. 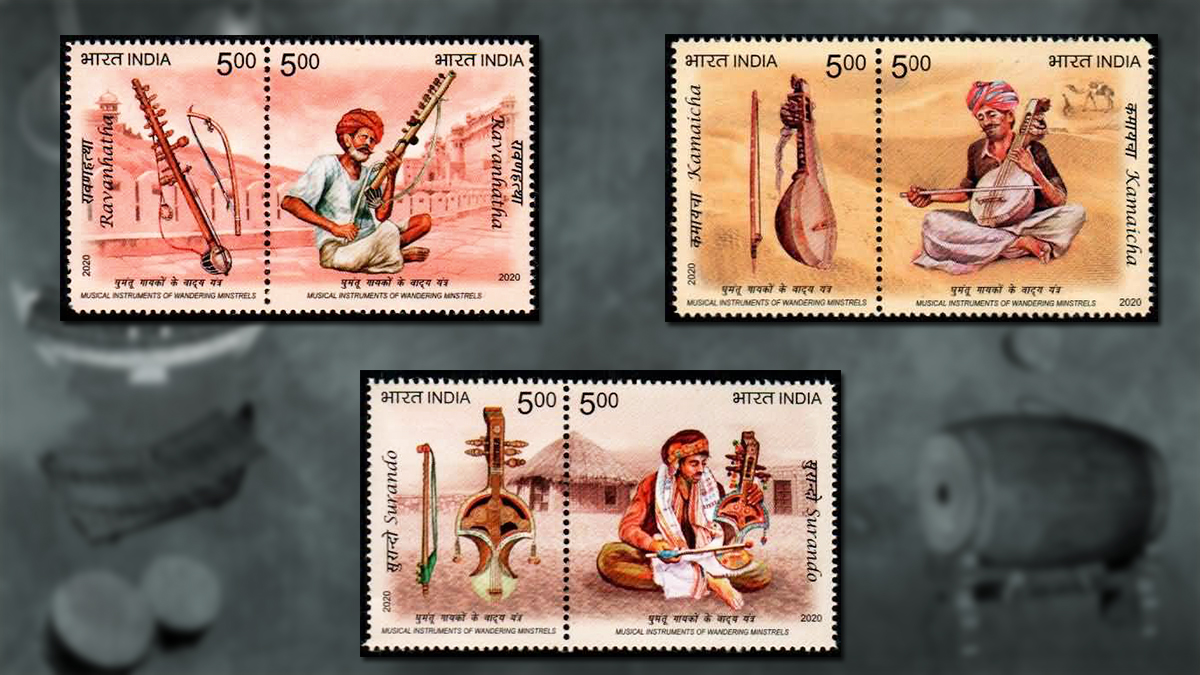 Kamaicha, one of the oldest bowed instruments, is the heart and soul of the Rajasthani folk music. Kamaicha plays a crucial role in the vibrant music of the Manganiyar community and can be found more in the Barmer region of Jaiselmer.

The body of the instrument is carved from mango tree log and goatskin is pasted on its belly. It consists of total 10-17 strings in which the main three strings are prepared from goat’s intestine called “Roda” and “Joda”. Other strings are called “Jhara” in which steel wires are used.

The bow is prepared from “Khejari” wood and horse tail hairs or synthetic thread. Small bells (gungroos) are attached to the bow to produce rhythmic jingle along with the notes. Every part plays a role in producing the sweet melodies of the Kamaicha.

For generations, Merasis are playing this instrument for royals’ entertainment. Even now, many of them are earning their livelihood thanking the presence of this magical instrument. You can easily find a Manganiyar singing and playing the heart-warming rhythmic tunes on his Kamaicha, in the surroundings of any of the popular forts in Rajasthan. The Kamaicha was depicted on one of the stamps of India that released in 2020 among the series Fascinating Musical Instruments Featured on Indian Stamps.

The bowl is made of a cut coconut shell that is covered with the goat hide. A Dandi, made of bamboo, is attached to this shell. The two principal strings are made of steel and horsehair, respectively. The longbow has jingle bells. Throughout the medieval history of India, the kings were patrons of music; this helped in increased popularity of Ravanhatta among royal families. In Rajasthan and Gujarat, it was the first musical instrument to be learned by princes.

India Post has released a beautiful thematic set of six stamps on Musical instruments. The stamps are released in se-tenant format. Each sheet contains 15 se-tenant stamps of denomination 5 Rs. One of them depicts Ravanhatha.

Traditionally used by the Fakirani Jat community in the areas of Kutch, the melodiously rich Surando is regarded to be a tricky instrument to master. Over the years the charming sounds of the Surando whose bow is strung with the tail of a horse have been silently disappearing in the vastness of the Kutch lands.

Osman Jat is the last known master of this instrument and as he strums his deft fingers across the strings, this quaint art of creating music which he acquired from his forefathers is brought to life but unfortunately might soon be extinct.

Surando known in Kutch is believed to have been well known as Sarinda in northern parts of India and in Sind of Pakistan. This is among the series Fascinating Musical Instruments Featured on Indian Stamps which was issued in 2020. 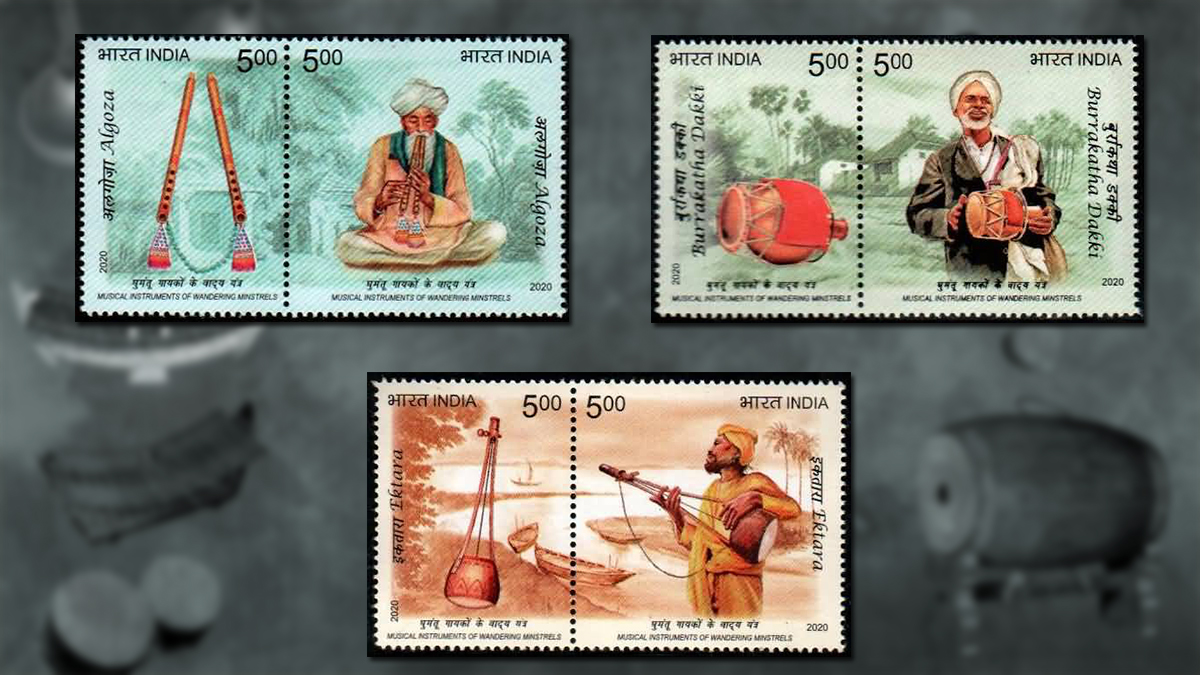 Alghoza is a pair of fipple flutes, found throughout northwest India and Pakistan. In the world of Alghoza playing, the two flute pipes are a couple. The longer one is the male and the shorter one the female instrument. With the use of beeswax, the instrument can be scaled to any tune.

It is an important instrument in Balochi, Sindhi, Punjabi and Rajasthani folk music. There are various approaches to construction. Occasionally the two flutes are physically joined together. Sometimes they are merely tied with a length of string, while sometimes they are completely separate. The number of holes varies as well. Occasionally one flute has 6-7 holes and plays all of the melodies while the other flute is drilled in such a way that it can only play a drone. However, another common approach has each flute with an identical arrangement of holes, such that both flutes have the capacity to play a melody. In this latter case, one generally is limited to playing only a portion of the octave.

India Post released a new set of 6 se-tenant commemorative postage stamps on “Musical instruments of wandering minstrel” on 25th June 2020. One of them features Alghoza.

Burra Katha is an oral storytelling technique in the Jangam Katha tradition, performed in villages of Andhra Pradesh and Telangana.

It is a pitcher shaped brass vessel with a short neck and round belly. The wider end is covered with skin with the help of cotton cord through hoops and an iron ring. It is widely used by Burrakatha minstrels. It is of the same class of instruments as the tombak of Kashmir or the Middle Eastern dumbek, or darbuka.

The instrument is hung around the neck and played with both hands. It is typically struck with the right hand while the left hand alternately opens and closes the opening at the small side. Occasionally both hands will be used to play the playing surface.

The term ‘Burra’ originates from Tambura and ‘Katha’ of course, is the Sanskrit word that means ‘story’. The troupe consists of one main performer and two co-performers. It is a narrative entertainment that consists of prayers, solo drama, dance, songs, poems and jokes. The topic will be either a Hindu mythological story (Jangam Katha) or a contemporary social issue. This is among the series Fascinating Musical Instruments Featured on Indian Stamps which was issued in 2020 in the series of “Musical instruments of wandering minstrel”.

Ektara is a one-stringed musical instrument used in the traditional music of South Asia and used in modern-day music of Bangladesh, India, and Pakistan.

Originally, the Ektara was a regular string instrument of wandering bards and minstrels from India and is plucked with one finger. The Ektara is a drone lute consisting of a gourd resonator covered with skin, through which a bamboo neck is inserted.

The Ektara is commonly used in “kirtan” chanting, a Hindu devotional practises of singing the divine names and mantras in an ecstatic call and response format. The Ektara is used by Sadhus, or wandering holy men and for Sufi chanting, as well as by the Bauls of Bengal.

Beautiful stamp of value500 Paise was issued in 2020 featuring this Musical instrument among the series Fascinating Musical Instruments Featured on Indian Stamps.

India is a country filled with cultural values and rich heritage has no dearth of musical arts. Numerous folk musical instruments fill the air of this land with brilliant vibrancy. In this session of Fascinating Musical Instruments Featured on Indian Stamps, we have discussed various musical instruments that take various forms and has the power to take you to a whole new world. So if you are a topical collector, start completing the Fascinating Musical Instruments Featured on Indian Stamps set.