Hinduism is considered as world’s third-largest religion in the world, over 15-16 percent of the global population are said to be Hindus. Hinduism is said to be the world’s oldest religion. There are many gods in the Hindu religion like Brahma, Vishnu, Shiva, Krishna, etc. But, today we will discuss the favorite and most loved gods of all Lord Ganesha; also known as Ganapati, and many other names. The Indian government has also issued stamps on Lord Ganesha, we can also see Lord Ganesha on Stamps of the world.

Ganesha, also known with the names Ganapati, Bappa, Vinayak, and many other names, is one of the best known and most –worshipped deities in the Hindu Pantheon. The elephant-headed Hindu god is being worshipped by many people. Ganesha is also referring to as ‘Vignaharta’ meaning remover of obstacles. Approximately Lord Ganesha has around 108 names, but some of his most popular names are Gajanana, Vinayaka, Vighnaharta.

Lord Ganesha is seen not only in Indian postage stamps of Thailand, Nepal, Niger, Mozambique, Sri Lanka, and many other had featured Lord Ganesha on Stamps. Countries like Indonesia had issued notes with Ganesha depicting on it.  Lord Ganesha is also seen on the note issued by Indonesia.

Ganesh Chaturthi is celebrated as the rebirth of Lord Ganesha. Every year Ganesh Chaturthi is celebrated enthusiastically in India, especially in the states like Maharashtra, Tamil Nadu, Andhra Pradesh, and Karnataka. Throughout India Lord Ganesha is considered the god of wisdom, prosperity, and good fortune. He is the most beloved god of the people with lots of zeal and passion. People welcome him full enthusiastically and passionately. Different countries at different periods have featured Lord Ganesha on Stamps. 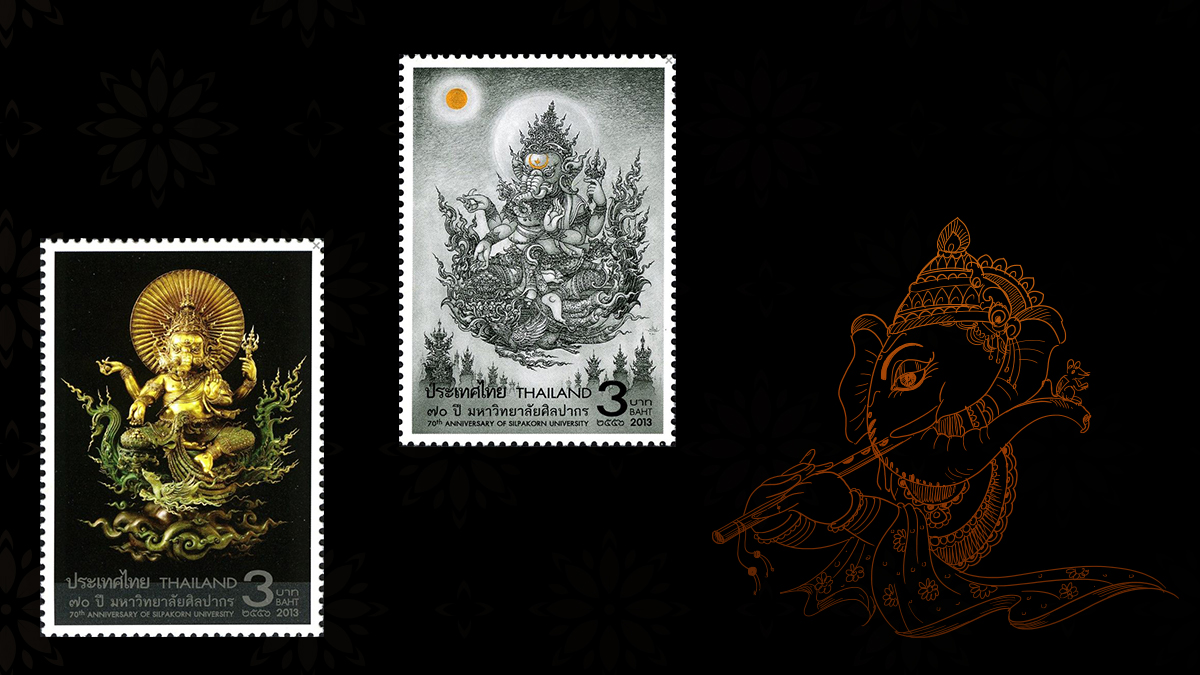 The above Lord Ganesha Stamps were issued by Thailand in the year 2013. They issued a Stamp on Lord Ganesha to honor and commemorate this god of wisdom. This stamp was designed by Chalermchai Kositpipat, the National artist of the country.

The Birth of god Ganesha is amazing and very interesting too. Once Devi Parvati created Ganapati out of Clay and gives him life, to protect herself in the absence of Lord Shiva. After creating Ganesha, she gave him a task to stand by the door of her palace and not to allow anyone inside. When lord Shiva return they were unknown to each other and got into the fight. As a result, Lord Shiva got angry and chopped Ganesha’s head. When Goddess Parvati came to know about this act she got very angry and ask lord Shiva to search Ganesha’s head and fix it. Shiva agreed and sent his dutas out to bring the head of the closest deceased creature, with the head pointing towards north. As a result head of a powerful elephant was placed on the boy’s body.

Ganapati has a large belly, four hands, large ears, and an elephant’s head. He has a rat as his vehicle; he has four hands but does not hold a weapon of mass destruction. Lord Ganesh is considered the seeker of knowledge and wisdom. 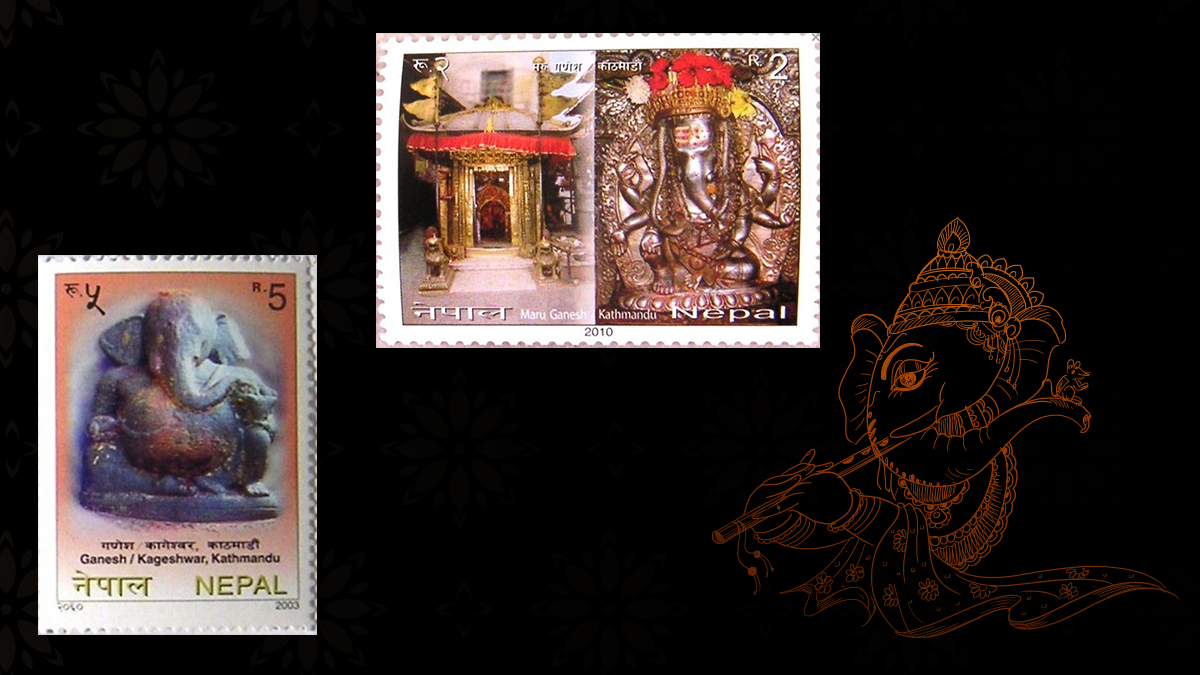 The entire Ganesh Chaturthi is divided into four distinct rituals: – Pranapratishhtha,  Shhodashopachara, Uttarpuja, and Ganapati Visarjan. The above Lord Ganesha on Stamps have been issued by Nepal in the year 20 03.

During Pranapratishhtha, idols of Bappa are created. The Sanskrit word ‘Prana means ‘life force, breath, spirit’, and the word ’‘Pratistha ’ means resting or position. Hence the word Pranapratishhtha means ‘Bringing life to temple’. It is also referred to as Murti Stapana (‘placing the image inside the temple’). The devoters of Bappa keep the idols of Bappa in Pandals or the home. They devote Ganapati through their prayers, singing songs, etc.

The ritual of Pranapratishhtha is followed by ‘Shhodashopachara’ that includes 16 ways of paying respect to Lord Ganesha. People also make certain offerings like coconut, jaggery, and rice flour preparation, red flowers, and 21 durva (trefoil) are also offered to the Lord.

The Uttar Puja is the final step in augmenting the absorption of these waves. During Uttar Puja, all the pavitraks (Vibrations of Shri Ganapatitattva) leave the Idol at once. After the Ujjar Puja, the idol of Ganesha is shifted from its place and prepared for Water or Visarjan.

During Visarjan the idols of Ganesha are immersed in the sea. It is said that Mahabharata (one of the epic books of India) was written by Ganesha as Sage Vyasa narrated to him. While writing Mahabharata, Ganesha ran out of writing material, so he broke his tusk and continued writing with it. The writing process went for about 10 days. When Ganesha finished his writing, clay was applied clay all over his body and was taken for a bath in the river. Therefore, on the 11th day, Ganesha is immersed in water.

Every year people wait with great anticipation to celebrate this festival. People believe that Ganesha will come and remove all their obstacles. For all 10 days, people work ship lord Ganesha whole hearty and celebrate this festival full enthusiasm. In these 10 days, devotees shower Ganesha with flowers, prasad, and different bhogs. The favorite Prasad or sweet of Ganesha is Modak, rice flour dough & a sweet coconut jaggery filling. Ganesha is often called Modakpriya for his love for Modak. 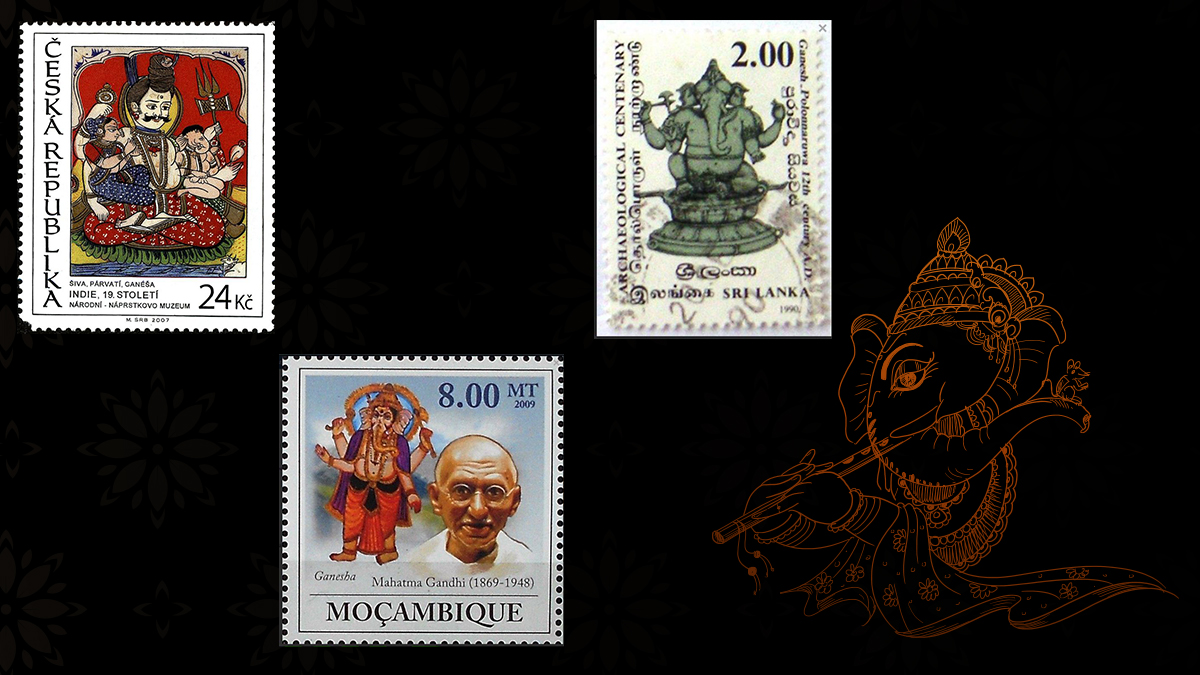