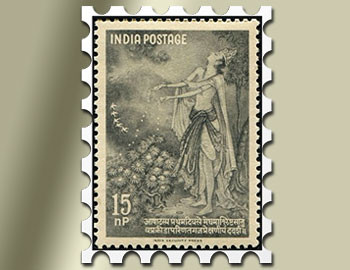 Kalidasa was probably one of the greatest exponents of Indian literature or Sanskrit from ancient India, whose works have earned him respect from all over the world even today. He was an active Sanskrit poet and dramatist in the 5th Century who is credited for six known genuine works namely – dramas Abhijnanashakuntala (“The Recognition of Shakuntala”), Vikramorvashi (“Urvashi Won by Valour”), and Malavikagnimitra (“Malavika and Agnimitra”); poems Raghuvamsha (“Dynasty of Raghu”) and Kumarasambhava (“Birth of the War God”); and the lyric “Meghaduta” (“Cloud Messenger”).

His name literally means “servant of Kali” and he had an orthodox yet intellectual Hindu outlook. He was a follower of Lord Shiva apart from other gods like Vishnu. Many believe that he was greatly influenced by the famous Sanskrit writer Ashvaghoshha. Apart from literature, he was also brilliant in contemporary sciences and arts, including politics and astronomy. Some historians believe that he died on the island of Sri Lanka during Kumaradasa’s rule in 517.  Others believe that he was one of the “nine gems” at King Vikramaditya’s Court in Ujjain. But Vikramaditya or “Sun of Valour” was a common notation given to many Kings of those times. It is true that he lived during the reign of Agnimitra, the second Shunga king (c. 170 BCE). The Aihole inscription of 634 CE praises Kalidasa. The Mandasor inscription of 473 also has some references about the great writer. Kalidasa makes Agnimitra his hero in his work `Malvikaagnimitra’ and Agnimitra was the son of Pushamitra Shunga who was in 2nd century BC , marking the upper bound of his existence. Vaanbhatta from early 7th century AD mentions Kalidasa in the preface of his kaadambaree, making it the lower bound. Some of the historians state that Kalidasa lived during the reign of Chandra Gupta II (c. 380–c. 415). That’s because his works reflect the cultural values and sophistications of that time period. He is regarded as the best exponents of Sanskrit literary composition. Click here to learn about coins issued by Chandragupta II. Click here to know more about a lyrist type of coin was issued by Samudragupta (father of Chandragupta II) as he was very fond of music.

The drama Abhijnanashakuntala elaborates a popular epic about how nymph Shakuntala was seduced by King Dushyanta. The girl and his child rejected him and they later met in heaven. The Child was Bharata, ancestor of Bharatavarsha or the “Subcontinent of Bharata”. Kalidasa remakes the story in his own style. The girl is sentimental and selfless. The King is the first servant of the dharma. He is a resolute hero who is suffering over lost love. In his version, Dushyanta did not separate the lovers. His action was caused due to a sage’s curse instead. Kalidasa uses metaphor beautifully to portray nature in most of his works.

The second drama Vikramorvashi tells a tale from Vedas. It talks about the love of a mortal for a divine maiden. The sorrowful king walks around a forest describing flowers as his own love. Malavikagnimitra, on the other hand, is comical and playful while maintaining the class and standard of his writing style.

His known Kavya or poetries were of two types epic and lyric. Raghuvamsha and Kumarasambhava are his epic style poems. Raghuvamsha talks about Lord Rama’s ancestors and descendants; Kumarasambhava talks about how Shiva was seduced by Parvati, how Kama, the God of desire was violently burnt into ashes, and the birth of Shiva’s son, Kumara (Skanda). These poems are both metrically and grammatically complete. The lyric poem “Meghaduta” is a message from a lover to his lost beloved, describing various mountains, rivers, and forests of northern India majestically. Ritusamhaara was another wonderful lyric poem that he wrote describing various seasons.

The most salient feature of his style of writing was that he used Brahmanic religious tradition and Sanskrit to talk about secular Hinduism. After the fall of the Gupta Empire, Kalidasa became a memory that nobody can forget even after so many centuries.