When the resonance of ‘Om’ spreads through the air the Nirguna Brahmand (universe) became Sanguna. This essence of Lord Shiva throbs in Indian soil, its philosophy illustrates him as the destroyer of evil, passionate lover, ferocious warrior, protector, lord of cosmic dance, incorruptible yet powerful force and equally ornamented with a fearsome temper. But this is what philosophy says about him, what about the commoners! How did they saw Mahakala (Lord Shiva) himself? Let’s learn about their perception of the God of the Gods through coinage by turning the pages of Indian numismatic to study Lord Shiva on coins.

Since ancient time symbols on coins are the representations of religious belief influenced from nature. Slowly these symbols took forms of deities which are worshiped throughout the Indian peninsula. But the root of this started from the first urbanisation which is known as Indus Valley Civilization. 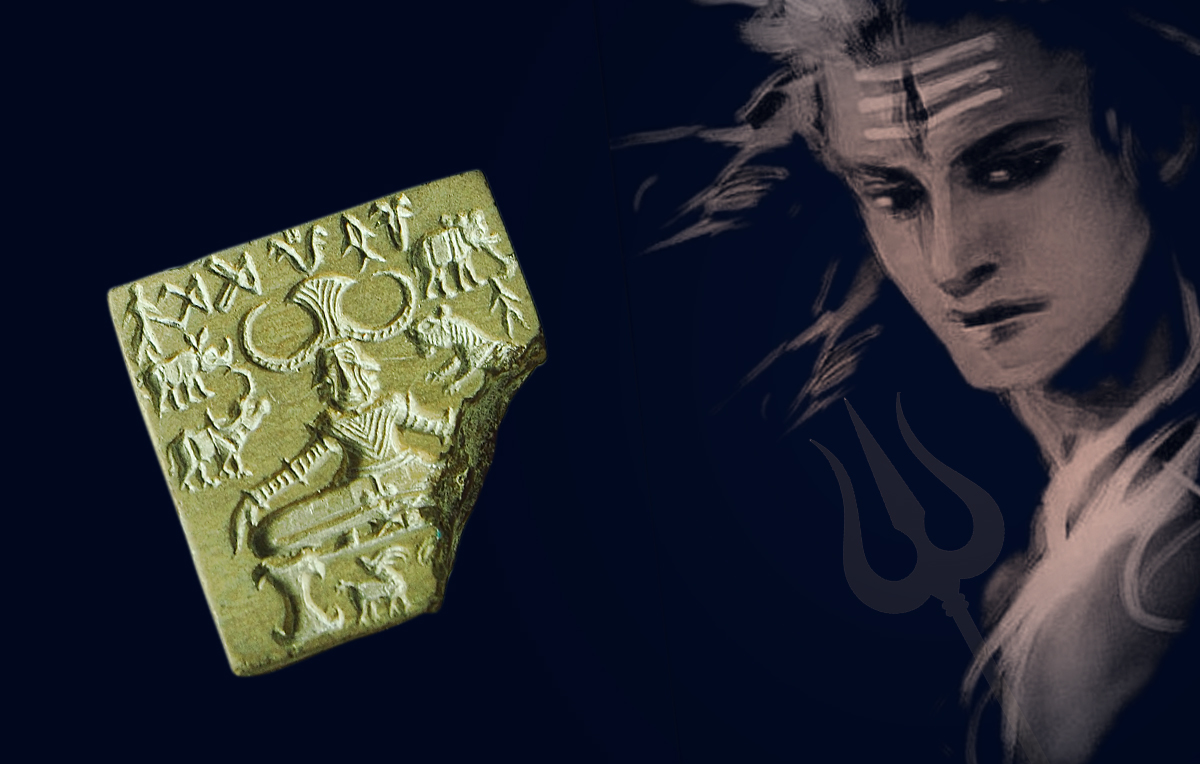 It is also interesting to note that Lord Shiva or the ‘Rudra’ of the Rigveda – who was referred as the lord of animals – was first depicted on the seal of Indus valley civilisation excavated from Mohenjo-Daro. A seal is an anthropomorphic form of ithyphallic Lord Shiva which signifies the prevalence of Shiva-cult in Mahayogi or Pashupatinath form also known as ‘Lord of the animals’.

This seal depicts buffalo-horned figure seated in ‘Padmasana’ surrounded by wild and virile animals like buffalo, leaping tiger, rhinoceros, and elephant. The undeciphered script is arranged horizontally in the space above the headdress. This whole portrait represents the transmission of power and establishing equilibrium.

But this seal is a part of a huge debate between scholars whether it was used as a part of the monetary system, token or as a pass, etc. Whatever that it may be but soon, as second urbanisation took place and coinage appeared, Lord Shiva appeared on coins too!

Ujjain is home to one of the ‘Jotirlinga’ of Lord Shiva called Mahakala. So it’s not surprising that a human-like figure found on Ujjain coin is called Mahakala and the coins as Mahakala type (Though the attributions of these coins to Mahakaal are debated between numismatists profoundly). 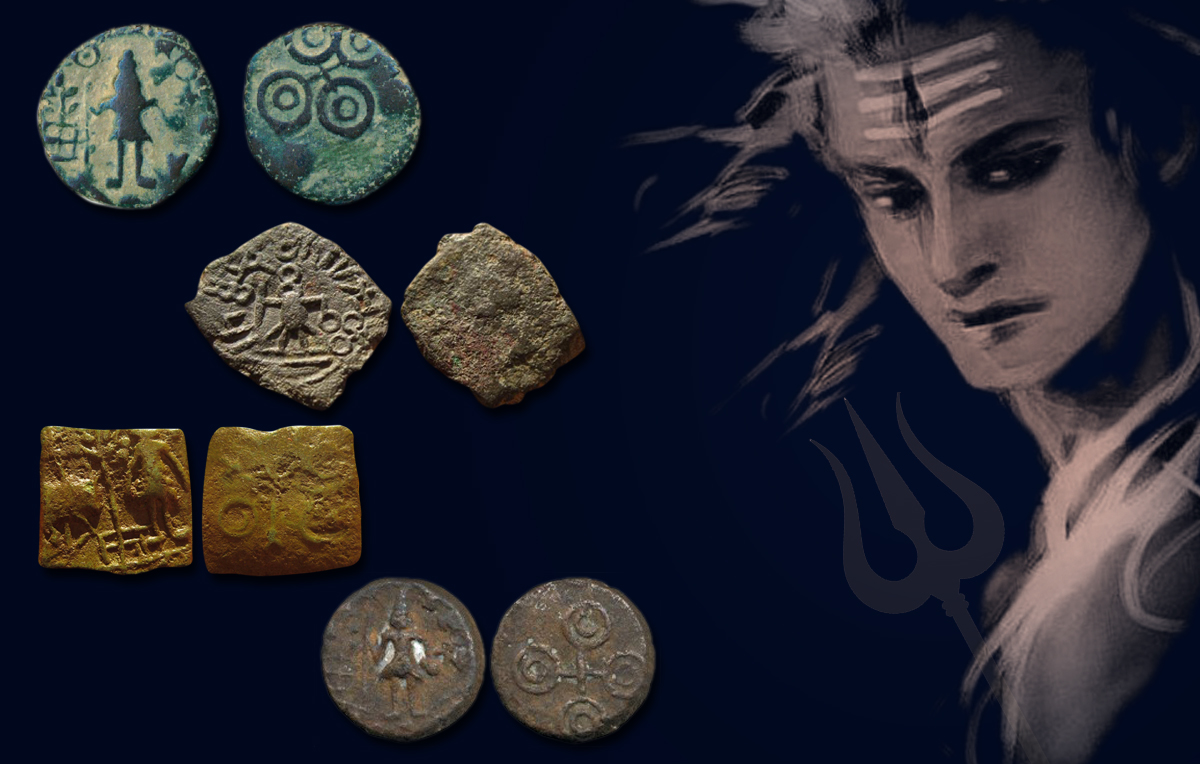 But if you will look at the first coin of the above-shown images the coin depicts a standing figure on a lotus holding spear and kamandalu besides a tree in the railing. The reverse of this coin depicts the double orb Ujjaini symbol.

Same for the second copper coin which was issued during the reign of Vishnumitra/ Jishnumitra. It depicts a human figure holding a spear in left hand and kamandalu in right, a four orb of Ujjain is depicted on right with Brahmi legend. The Fourth coin is same but with uncertain issues.

The third coin is little different it an un-inscribed die-struck. This coin depicts human figure standing on a ramp, fully blossomed tree (with fruits) in the railing, bull standing, facing right. The reverse depicts four double orbed Ujjaini symbol and a taurine symbol in between orbs.

The human figure depicted on this coin is said to be Mahakala but this coin also depicts other human figures which are associated with different deities.

The above images showed a human figure which is associated with Mahakal- a form of Lord Shiva on coins. 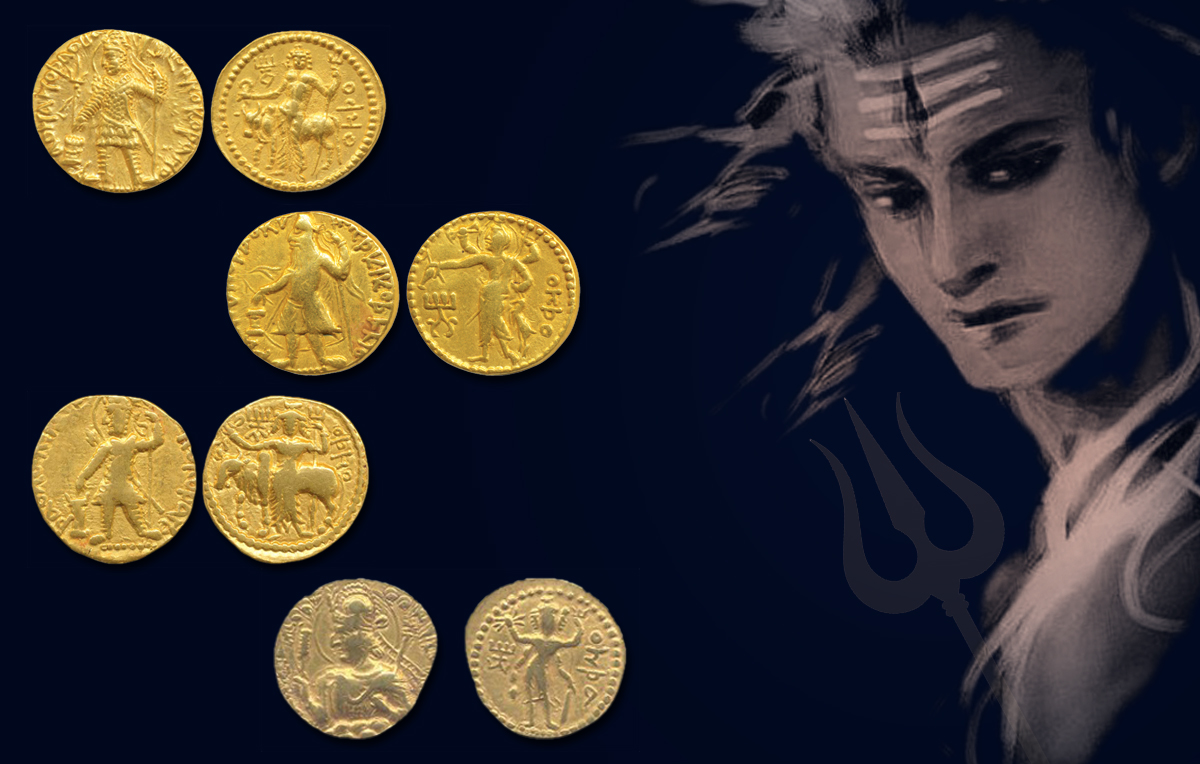 The first image of gold dinar minted in King Vasudeva reign depicts Lord Shiva in standing position with Nandi (bull) in the background. He is holding the trident in right hand and tamgha is seen n the upper left field with an inscription in Bactrian-Greek “Osho”.

It is quite fascinating to study that a single coinage illustrated Lord Shiva with different attires and attributes. So much variation in one segment makes you wonder regarding the perception of Lord Shiva in that era.

Learn more about the deities on Kushan coins. 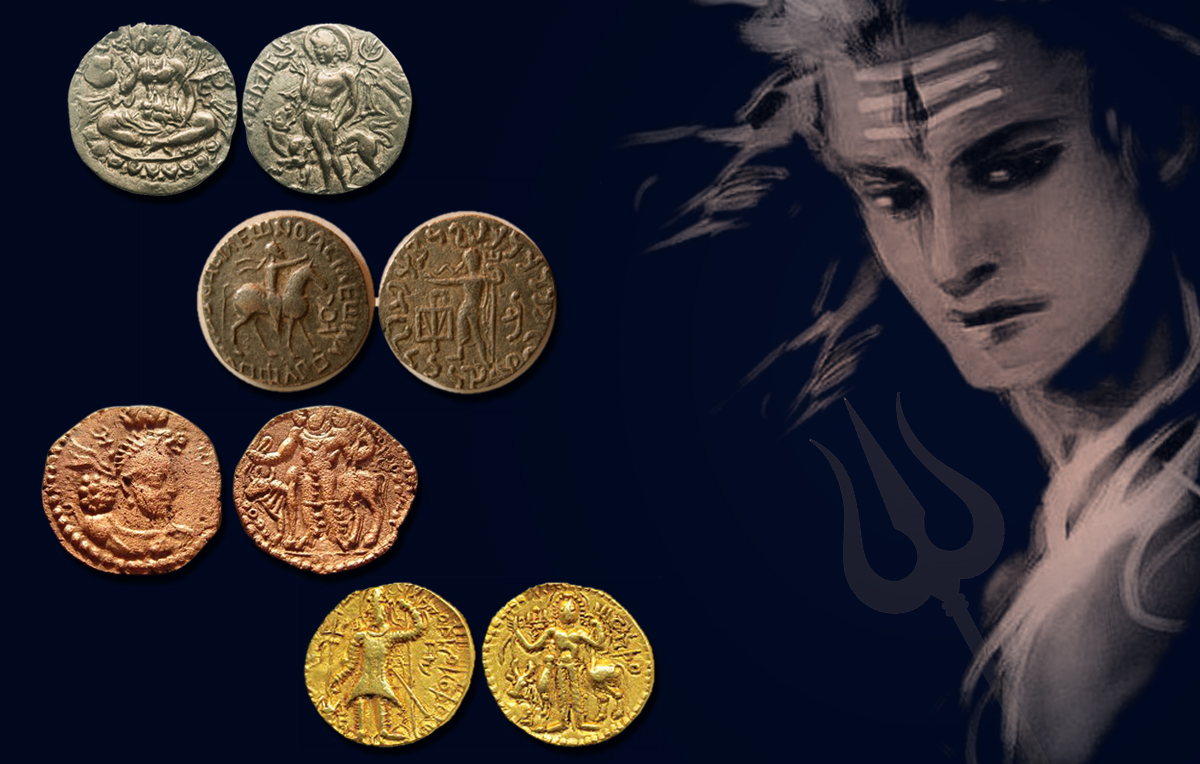 The above picture shows four coins which illustrate Lord Shiva through various iconographies. The first coin was issued in the reign of Meghavahana, Kidarite / Hunnic dynasties. It reverse depicts Lord Shiva in ‘Tribangakaya’, bent at three sides holding trident and lotus with a tiger in the background. This association of Shiva with tiger signals its identification as Pashupatinath: The Lord of Beasts.

The second coin, Tetradrachm minted in the reign of Indo-Parthian king Gondophares. Its obverse depicts Lord Shiva holding a long trident with Kharoshthi legend around. The third coin belongs to Kushano-Sasanian king Bahramvahram I the reverse flan of this coin depict Lord Shiva with Nandi holding a diadem and trident.

The fourth coins belong to Kushan dynasty which depicts Lord Shiva with Nandi holding trident with the noose in left.

These four coins depict variation in the iconography of Lord Shiva but yet show its familiar characters which are associated with Neelkantha. 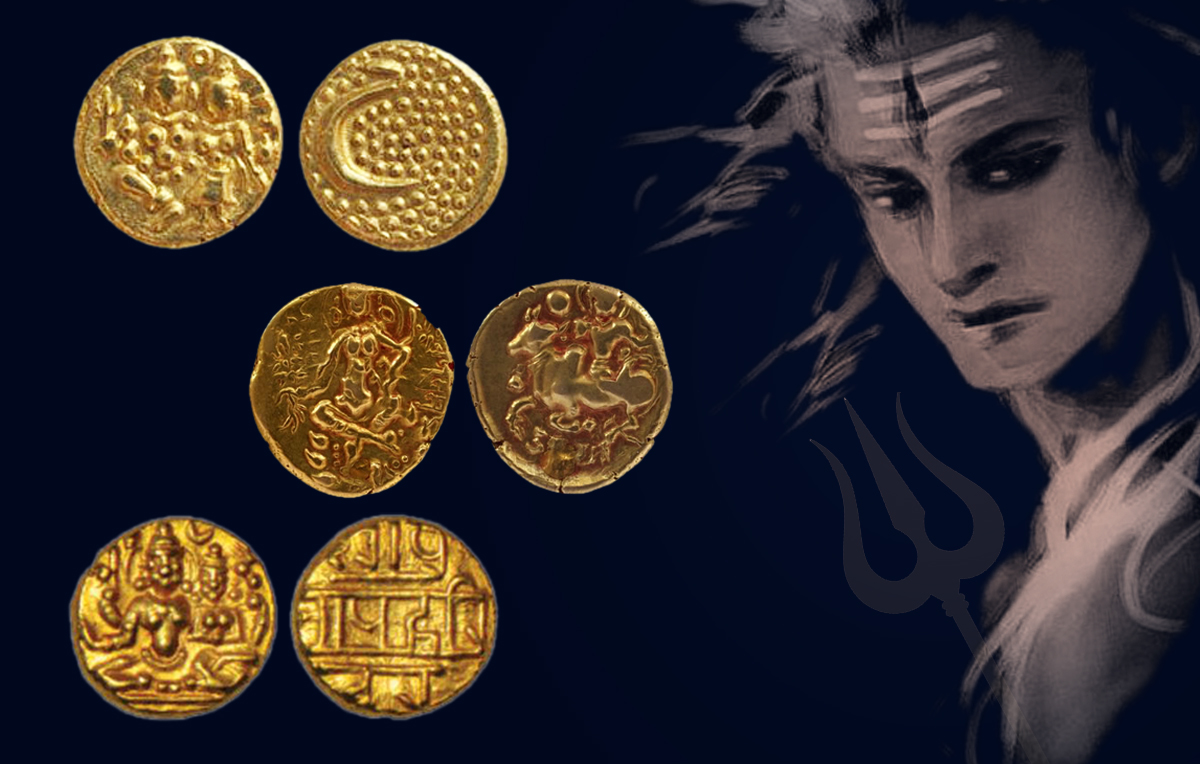 So far we have seen Lord Shiva on coins depicted alone but now let’s see some coins where his consort Goddess Parvati is also depicted with him. The best example is a gold Pagoda of Haidar Ali (1st coin in the image) which depicts seated Lord Shiva with Trident and his consort Parvati is standing on his left.

The second coin was issued by Bengal Gupta during the post-Gupta era and here Lord Shiva with Nandi is depicted holding a trident on the reverse and the obverse has Goddess Lakshmi depicted in the Gajalaskshmi form. (This may show a link between the subsects of Hinduism: Vaishnavism and Shaivism)

The third coin in the above-shown image is a gold pagoda of Vijayanagar minted during the reign of King Hari Hara II of Sangama Dynasty. This coin’s obverse depicts Shiva-Parvati in seated from.

It’s quite amazing to see how beautifully this divine couple is depicted on coins of India. 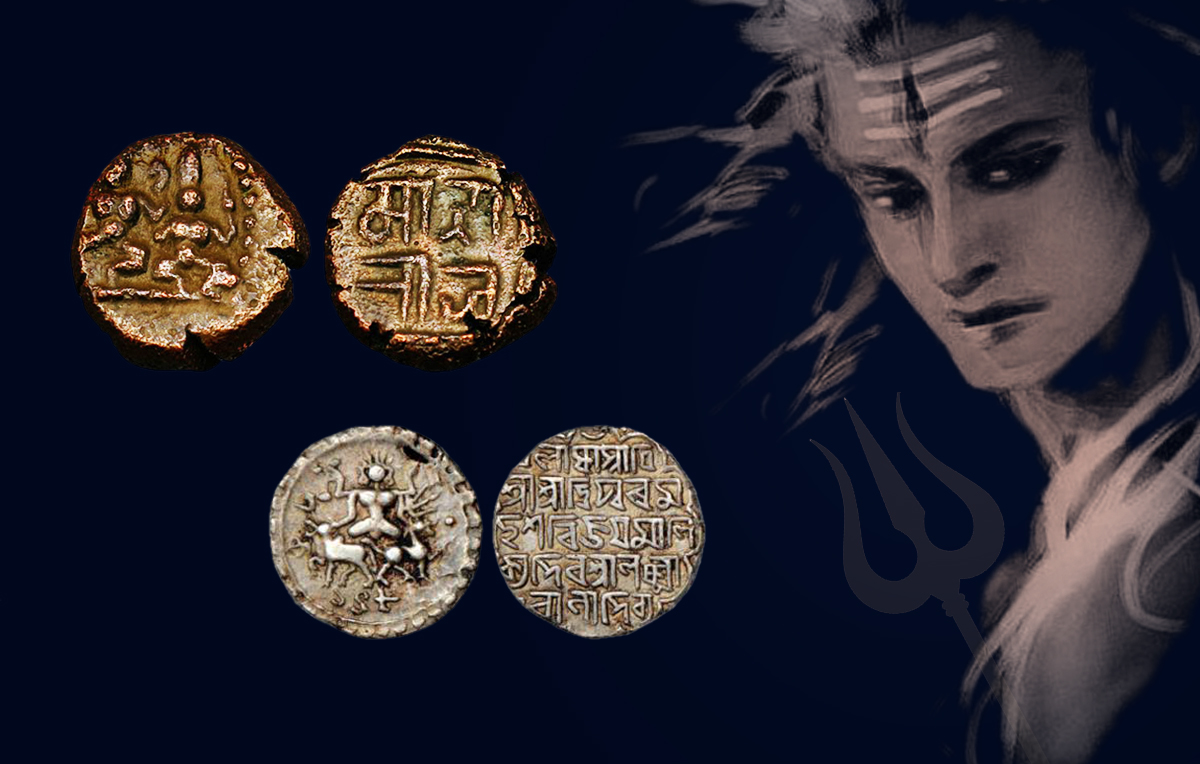 Like the coinage of Haidar Ali and Vijaynagar, the Marathas of Tanjore also depicted Lord Shiva on coins with his consort. The first coin of the above-shown images depicts Lord Shiva and Paravati seated facing front. Shiva is holding an antelope head in his left hand and Paravati is holding a mace in her left hand. 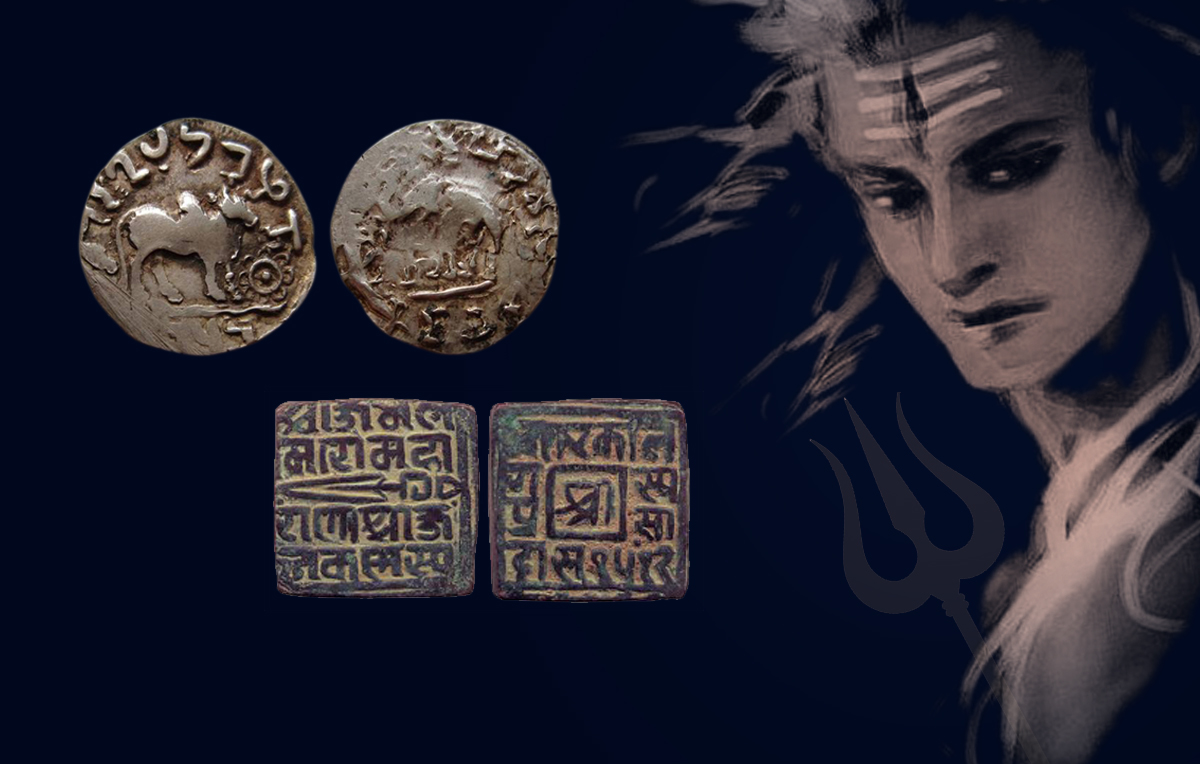 Now we will see something different, in the above images of the coins Lord Shiva is not depicted but his name is inscribed on these coins.

The first coin was issued by King Mahadeva of Vemakas in 200 BCE, this coin’s reverse depicts elephant with the trident and praises Lord Shiva in Brahmi legend ‘Bhagavata Mahadevasa Rajaraja’.

The second copper coin was issued by Maharana Kumbhakarna. Its obverse and reverse depict Nagari legend which citing Lord Shiva as Eklingaji.

In Indian coinage, you can see various symbols of Lord Shiva like a trident, ling, belpatra, crescent, etc. Indian culture has adorned many forms of Lord Shiva in different aspects. For a dancer, he is Nataraja, for a student, he is Dhyutidhara, for a musician he is Pranava, etc.

He has many names in every corner of the Indian subcontinent. But yet worshipping him does not need any extra effort. He is worshiped by each and every segment of the Hindu society.

View all posts by Team Mintage World →
5 thoughts on “God of the Gods: Lord Shiva on coins!”