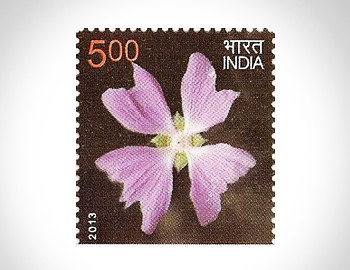 There must be a reason why flowers and colours rhyme so well together! Maybe because they add that dash of much-required vibrant colour to our lives. India has been home to some of the most varied species of flowers in the world. In fact, if you were to consider just the Himalayan ranges, there is so much to explore. India Post has depicted 12 lovely flowers on postage stamps that were released as a single set on 3rd October 2013. Let’s talk about six of them today. 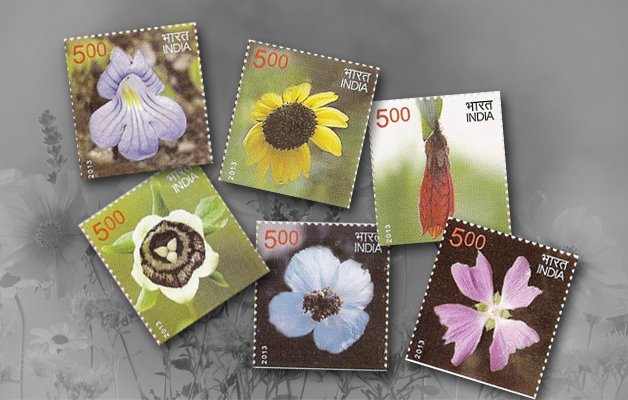 Dibang Chirita is named so because it is a Chirita type flower found in Dibang Valley, Arunachal Pradesh. This erect herb has a quadrangular, hairless stem while its leaves are ovate or ovate-elliptic and hairless. The leaf axils bear a single flower. It has a bluish white colour outside and has 2 yellow lines on the lower parts of the palate and in the throat. If you are someone who loves flowers on postage stamps, you should definitely have this one in your collection!

Like the name suggests, Kashmir Mallow is a medium-sized single funnel-shaped pink coloured flower that is majorly found in Kashmir. The plant is generally a large bush with ivy shaped leaves. They blossom from midsummer to fall in a clear pink shade. It has three false sepals below the middle. Sepal cup is a bit longer than the false-sepal and the flowers have dense hair at the base.

Himalayan Mini Sunflower blossoms on a 1-foot tall perennial herb from July to September. The yellow, sunflower-like flowers have dark centres. These single flowers generally look down with narrow elliptic ray-florets. They blossom on stout stems with oblong stem-clasping leaves. They are generally found at high altitudes of 3500-4800 m, slopes in the Himalayas, from Kashmir to SE Tibet. For someone who is looking for flowers on postage stamps, this one is a must-see!

Himalayan Lantern is a beautiful little lantern-shaped flower that blossoms on shrubs between May and June. The rootstock is tuberous while the twigs are cylindrical. Flowers hang down in fascicles and are found in different colours like bright red, orange, or pinkish white. Tiny petals are curved from behind. Some sepals are bigger than others. They are generally found at heights of 1200-3000 m, in Nepal, North East India, mostly Darjeeling.

Roundleaf Bellflowers are lovely bell-shaped flowers that blossom on the perennial vine with stems between July and August. They are greenish-white in colours with purple veins and short lobes. They flower at leaf axils or at the tip of the branch. They are mainly found in the Himalayan ranges spread across Pakistan and Nepal Pakistan at 1800-3600 m above sea level. Definitely, something unique to have if you are looking for flowers on postage stamps!

The Blue Poppy is one of the rare flowers of the world which are blue in colour. It is found on slopes of mountains against a snowy background, adding those hues to a generally dull landscape. They mostly have 4-petals and have a contrasting effect against the golden-yellow stamens. The prickly plants have narcotic poisonous roots and are found in the Himalayas at 3,000 to 4,500 meters above sea level.

Stay tuned for the second part of this story where we explore details about the remaining flowers on postage stamps of India, from this set!