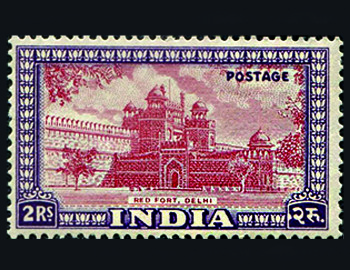 India is in a way defined by its unity in diversity which is reflected through the various historical monuments that were built by dynasties and emperors belonging to different ethnic groups or even religions. Let’s continue from where we left earlier and learn more about some popular and some not-so-known monuments that have been depicted on stamps of India.

The Red fort is situated in New Delhi and was constructed in 1648 by the Mughal Emperor Shah Jahan. It was a fortified palace made for his capital Shahajanabad. The Fort is made out of huge red sandstone bricks. It comprises of elegant and royal apartments which are connected by a water channel called the Stream of Paradise. The architecture reflects the immense beauty of Mughal times, showcasing a mix of Timurid and Persian traditions designed based on Islamic hallmarks. The Prime Minister of India hoists the national flag on Independence Day at the main gate of this beautiful structure. It has also been declared as a UNESCO World Heritage Site in 2007. India Post issued a special 2 rupees stamp, on the Independence Day celebrated in 1949.  If you like collecting stamps of India featuring historical monuments on them, you must have one of these in your kitty.

Sanchi is situated in Raisen District, Madhya Pradesh and is known for its beautiful Stupa which is considered as the oldest stone structure in India built by Ashoka the Great in the 3rd century BCE. A hemispherical structure was built over the relics of the Buddha initially. Ashoka’s wife Devi was responsible for monitoring the project. Sanchi was where Devi was born and where her wedding with Ashoka took place. Four magnificently crafted gateways were added in the 1st Century BCE. The old stupa was later covered during this time. The bottom part of the pillar still exists as is and the upper parts are placed nearby. The pillar bears Ashokan inscription and an inscription in the ornamental Sankha Lipi from the Gupta period as well. A special 3 Annas stamp was released on 15th August 1949 featuring this historic monument.

Mohammed Adil Shah, Sultan of Bijapur’s mausoleum rests at Gol Gumbaz which was completed in 1656 by the architect Yaqut of Dabul. A Deccan architectural style was followed to construct this beauty and the name literally means a circular dome. Eight intersecting arches made by two rotated squares to create interlocking pendentives to support the dome. A dome-capped octagonal seven stories high tower with a staircase was created at the four corners. They open out to round galleries around the dome. Square podium with steps on each side is situated in the middle where the grave of the emperor lies. The acoustics of the space is so well crafted that even the slightest of sounds can be heard on the other side, which is why it is called “Whispering Gallery”. A lovely 6 annas stamp was issued on 15th August 1949 featuring this historic beauty! You should ideally have this one in your collection if you like collecting stamps of India featuring monuments on them!

Shatrunjaya hills are situated in the city of Palitana, Bhavnagar district, Gujarat, on the banks of the Shetrunji River. The site contains hundreds of Palitana Jain temples. The first tirthankara of Jainism, Rishabha offered his first sermon in the temple on the hill top. Some say that the temple’s history can be traced back to the times of Pundarika Swami, a chief Ganadhara and grandson of Rishabha, who’s shrine, built by his son Bharata is located opposite to the main Adinath temple. Pundarik was said to have attained nirvana on this mountain. A special 15 annas stamp was issued by India post featuring this divine temple.

The Kandariya Mahadeva which translates to “the Great God of the Cave” is one of the most majestic medieval period temples situated in Khajuraho, Madhya Pradesh. Khajuraho and Shubham were the capitals of Chandela Rajputs and this artistically built Shiva temple was constructed under the regime of a Chandela king Dhanga dev who ruled from 1017 to 1029.  Many other temples were also built during this period. Vidhyadhara, is another powerful ruler who is credited with building the Temple. He fought hard with Mahmud of Ghazni in 1019 and it is believed that Vidhyadhara celebrated his success by building the Temple for his family deity Shiva. In 1986, the temple was declared by UNESCO as a World Heritage Site. The Kandariya Mahadeva Temple is the largest in the Khajuraho complex of temples. It is known for the cosmic design of a hexagon representing the three forms of Shiva. The temple is made of intricately designed porches and towers which end in a shikhara or spire. An eight anna stamp was issued on 15th August 1949 celebrating this splendid architectural delight from the medieval times.

We are not ending it here; we would soon come back with many more historical wonders that have been featured on stamps of India.

Below is the link to the earlier blog in this series: