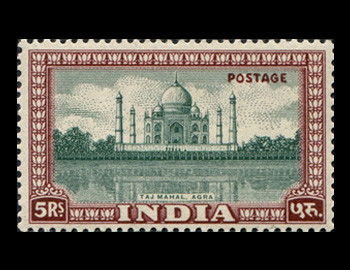 There are a million reasons why India is like a honey-pot for travellers who flock in from all over the world to experience something completely magical. It’s the vibrant kaleidoscope of traditions, history and cultures that makes India such a unique country which are also depicted on stamps of India. Even in rich diversity one gets to see oneness in the spirit of India. Several stamps have been released by India Post which signifies this beautiful aspect. Today let’s take a tour through some of the most popular monuments that have been depicted on Indian stamps. 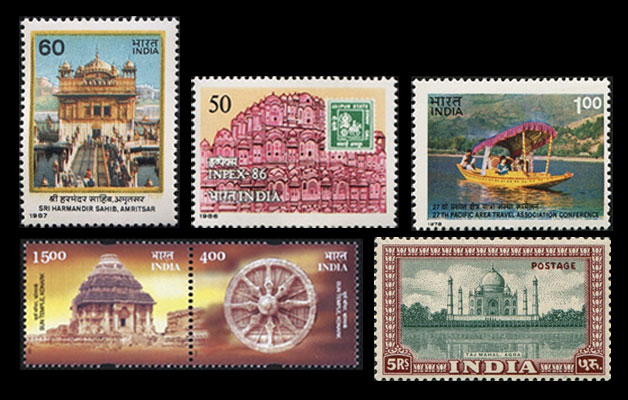 The Taj Mahal is one of the seven wonders of the world and is a beautiful ivory-white marble mausoleum situated at the banks of Yamuna river in Agra. It was built by the Mughal emperor, Shah Jahan in 1632 as a tomb of his wife Mumtaz. The tomb comprises of a mosque, a guest house and gardens with a separated walls on three sides. Though the work was completed in 1643, more phases of the project went on for 10 years. 32 million rupees were spent on constructing this and some 20,000 artisans were employed under the leading architect, Ustad Ahmad Lahauri. It was declared as a UNESCO World Heritage Site in 1983. A stunning commemorative stamp was issued in 1967 featuring the Taj Mahal.  To know more about these amazing stamps of India, take a tour through our fabulous online museum.

Sri Harmandir Sahib or the “Golden Temple” is a Gurdwara of Sikhism in Amritsar founded in 1577 by Guru Ram Das, the fourth Sikh guru. The temple is also the home to the Adi Granth, the holy scripture of Sikhism and the Akal Takht, the seat of God’s temporal authority. The temple was made for people from all religions to worship God equally. Guru Arjan invited Muslim Sufi Saint, Sai Mian Mir to lay the foundation stone. The four entrances portrays openness of the Sikhs towards all people and religions. Over 100,000 people visit the temple and be a part of the the community meal or Langar every day  regardless of any religion, caste or creed. The temple was rebuilt in 1764 by Jassa Singh Ahluwalia and other Sikh Misls. Maharaja Ranjit Singh secured the Punjab region from outside attack and covered the gurdwara with gold in the early nineteenth century. Take a look at one of the stunning stamps of India featuring the Golden temple.

Dal Lake is situated in Srinagar and is the second largest in the state. Also known as the “Srinagar’s Jewel”, it is a prime tourist attraction and known for fishing and water plant harvesting. The bank of the lake is 15.5 kilometres long and has Mughal era gardens like Shalimar Bagh and Nishat Bagh, parks etc. You can explore the lake cruising in the colourful shikaras or houseboats. When the temperature drops to −11 °C, the lake gets frozen. The floating gardens or “Rad” in Kashmiri, blossom with lotuses during July and August. The wetland is divided by causeways into Gagribal, Lokut Dal, Bod Dal and Nagin Lokut-dal and Bod-dal each have an island in the centre, known as Rup Lank and Sona Lank respectively. Massive efforts are being undertaken by the Indian Government to clean this lake and restore its original beauty. Here is a stamp issued by India Post, that celebrates the Dal lake. Know more about stamps of India at Mintage World.

Hawa Mahal which translates to “Palace of Winds” is situated in Jaipur, India and is made of pink and red sandstone. It is named so because of it’s a high screen wall with 953 small windows for royal women to observe street festivals without them getting noticed by people from outside as per traditions. The palace is at the end of the City Palace and extends to the women’s chambers. The structure was built in 1799 by Maharaja Sawai Pratap Singh, designed by LaLChand Ustad after getting inspired by the unique structure of Khetri Mahal. The palace looks like the crown of Krishna, the Hindu god. Small windows or jharokhas decorated with intricate latticework allows cool air from the Venturi effect, cooling down temperatures during summers. The Palace also boasts of the stone-carved screens, small casements and arched roofs. Click here to take a look at an Indian stamp which features the Hawa Mahal! We have an online database of many more stamps of India, simply explore!

Konark Sun Temple in Odisha, India was built by king Narasimhadeva I of Eastern Ganga Dynasty in 1255 AD. The entire complex looks like a huge chariot with carved stone wheels, pillars and walls. The temple is a UNESCO World Heritage but most portions of the temple are now in ruins. The temple was built at the mouth of the river Chandrabhaga for the Sun god, Surya by following Kalinga architecture using Khondalite rocks. The temple is so brilliantly positioned that the first rays of sunrise strikes the main entrance. The original temple had 229 feet tall sanctum sanctorum (vimana) which fell in 1837 as the heavy structure could not withstand itself on the loose soil of the area. The audience hall (Jagamohana), dance hall (Nata mandira) and dining hall (Bhoga mandapa) still remains today. The Konark temple is also flanked by magnificent sculptures of maithunas. There are two older 11th Century temples beside the main temple. The Konark Archaeological Museum preserves the collection of fallen sculptures which are maintained by the Archaeological Survey of India. Take a look at an Indian stamp that features the mesmerising Sun Temple.

We will come back with more stamps of India that have depicted other popular monuments of India.