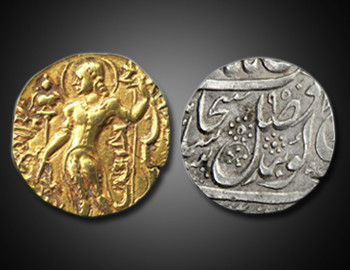 Gupta coinage bore inscriptions and verses describing the kings beautifully using the traditional Upagiti and Prithvi meter. These meters were used in poems that were penned in ancient times and bore four lines of alternately twelve and fifteen instants. A coin minted by Chandragupta II bore the Legend around in Brahmi which reads “Kshitim avajitya sucharitair divam jayati vikramaditya” in Upagiti meter. The verse means “Long live The King Vikramaditya the one who has conquered the world, the one who has a pure character”. If you like to read up on Indian coins with couplets, then coins by Chandragupta will definitely excite you.

Another coin minted by Samudragupta bore the Brahmi legend “Kritantparshur Jayatyajita Rajajetajitah” in Prithvi metre. The obverse shows the King on left holding battle axe (parshu) in his left hand and a sword. Right arm rests on his waist with an attendant by his side on right, “Samudra” is written in Brahmi below his left arm.

It is believed that Akbar started the 200 year long tradition of minting coins with poetic couplets after a long break. Gold Mohurs weighing 10.96g was issued at Agra Mint. (Todywalla Auction no: 100, lot number 28) The famous rev inscription reads ‘ta zamin wa asman ra muhr anwar zewar asht’ which translates to “While earth and sky are illuminated by the shining sun”. This coin is considered as a beauty when we  are talking about Indian coins with couplets.

Akbar’s successor, Jahangir was very passionate about poetry. This is clearly evident from the kind of coins that he issued with wonderful couplets on them. Many instances have been recorded that he has handsomely rewarded those who would recite a good poetry. Its mentioned in Tuzuk-e-Jahangiri that Noorjahan had once recited a couplet and she received a couplet from Jahangir in response. The verse goes like “Ba hukma Shah Jehangir yafta sad zevar Ba nam-e- Noor Jehan badshah begam zer” which translates to “This gold hath a hundred beauties gained with the inscription of the name of Noor Jehan, the Badshah Begum (Empress)” Some other example of couplet-types that he issued were: ta-falak, inayat allah, sakht noorani , hamisha, yaft, kishtwar, din-panah, Khusru giti panah, Khusru alam panah etc. Being someone who loves poetry, Jahangir minted some really soulful couplets on Indian coins.

Aurangzeb was another emperor who continued the tradition of issuing Indian coins with couplets. The most popular ones are ‘Badr-e-munir’ and ‘mihr-e-munir’. The Badr-e-munir couplet coins were minted on silver and described the moon. The obverse on these coins read “Sika Zad Dar Jahan Chu Badr-e-munir, Badshah Aurangzeb Alamgir”. The “mihr-e-munir” couplet was minted on gold coins and they described the sun.  The obverse on these coins read “ikka Zad Dar Jahan Chu Mihr-e-munir Badshah Aurangzeb Alamgir”

Two different couplets with slight variations in mints and types were used on the obverse of the coins of the Sikhs. Both these legends praise the Almighty with the blessings of the Gurus of the Sikhs, from Guru Nanak – the founder of the Sikh religion – to Guru Gobind Singh, the tenth and the last Guru of the Sikhs – the founder of the Khalsa. Of these 2 couplets, one has been termed as “Nānakshāhi” couplet and the other as the “Gobindshāhi” couplet. When we are studying Indian coins with couplets, one cannot forget these beautiful Sikh coins.