The Vishnu trivia is not over yet. In the previous blog we discussed first five avatars of Lord Vishnu. We familiarised ourselves with their stories and the reasons why the Lord decided to incarnate on earth. These incarnations or the Avataras of lord Vishnu form a core concept of Hinduism. Hidden behind every Avatara is a message that the Lord conveys. Some even view the Dashavataras of Lord Vishnu as the stages of human evolution. In this series of blogs we are viewing the Avataras through the legendary artwork, Geeta Govinda, of poet Jayadeva. Department of Post, India, has issued a beautiful Miniature sheet depicting 11 stamps; with 10 avatars of Vishnu and one stamp depicting the celebrated poet, Jayadeva. Let’s continue our journey of exploring the Incarnations of lord Vishnu on stamps.

The Dashavatara Stotra, composed by Jaideva, sums up all the incarnations of Lord Vishnu and offers him an obeisance. 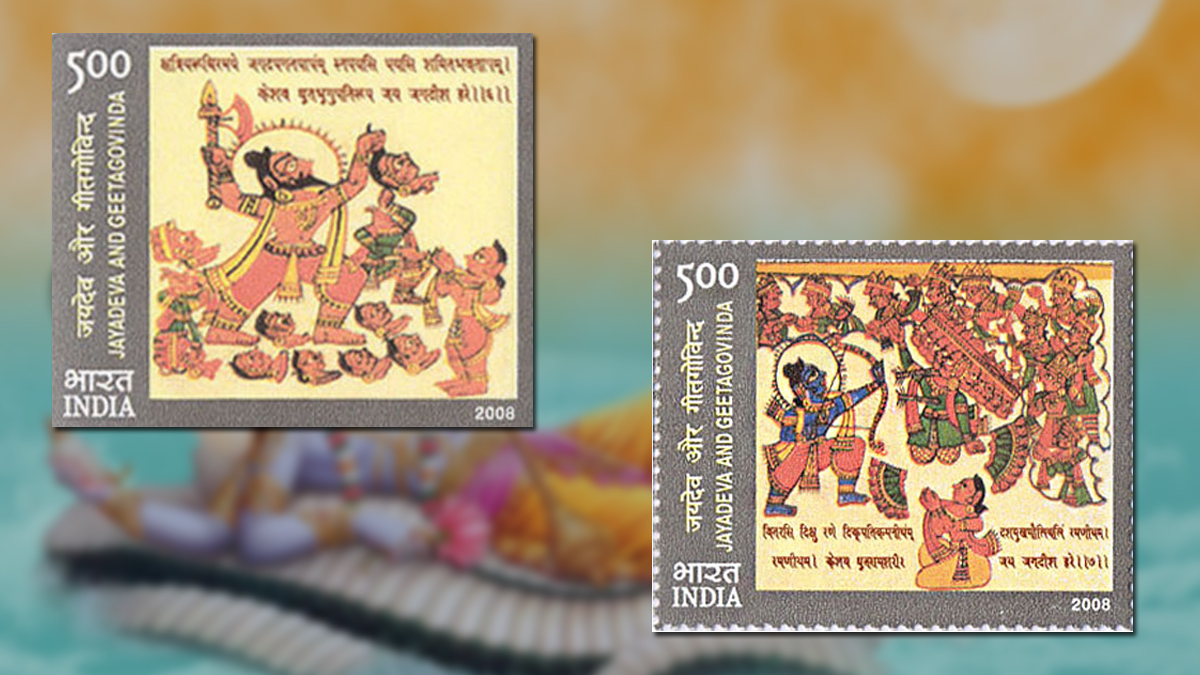 The fifth Avatar of Vishnu i.e. Parshuram, was a great devotee of Lord Shiva and was trained under him. Because of Parashurama’s warfare skills, it was impossible for anyone to defeat him. He was one of the strongest Brahmin kshatriya and also an immortal!

Once there was a king named Kartavirya Arjuna who came with his army to Parshurama’s father’s ashram. He was served the food with the help of divine cow kamadhenu. But the king was not satisfied by this and asked for the animal. Jamadagni refused to this and he was killed. Parshurama on hearing this was very angry and killed the king along with his army. He took a vow to kill all the Kshatriya twenty-one times. No one could stop this except his grandfather Rishi Rucheeka.

To commemorate this great Avatar of Vishnu, India Post issued a stamp depicting a whole scene of Parshuram killing all the Kshatriyas.

Among all the Avatars of Lord Vishnu, Rama is the most well-known to everyone. His actions and stories are narrated for generations and are giving a deep understanding of Hindu dharma. Every Hindu devotee considers Rama to be a significant figure. Rama remains one of the most iconic deities in Hindu culture. Rama, the seventh incarnation of Lord Vishnu was a personification of righteousness and human values that appeared in Treta Yuga. The whole journey of Rama’s life is a lesson for mankind about the importance of sticking to principles of righteousness, justice, truth and strength of character. In battle or in peace, Rama never let go of these ideals.

The story of the Ramayana is pretty well known around the world and is the story of Rama’s wife, Sita, being kidnapped by a demon, Ravana, leading to a battle which ensued to rescue her. The given stamp issued by India Post to commemorate Jayadeva’s Geeta Govinda beautifully captures the essence of Ramayana on this tiny stamp! 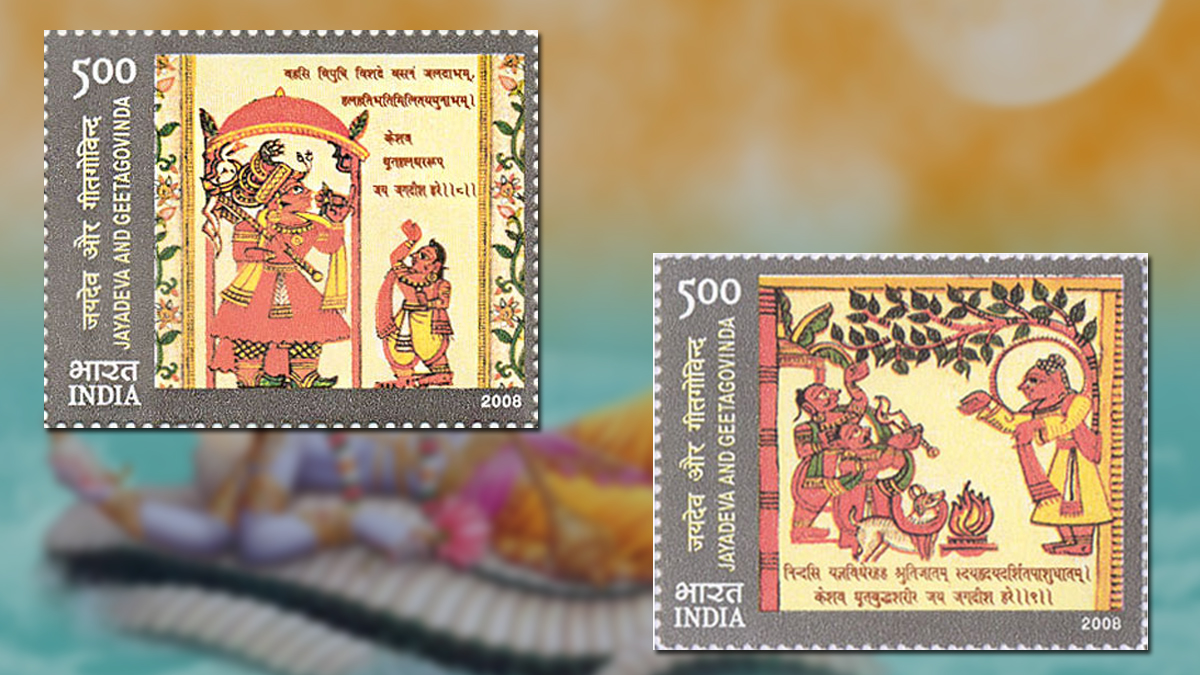 The elder brother of Krishna, Balaram, is regarded generally as an avatar of Shesha. However, Balarama is included as the eighth avatar of Vishnu in the Sri Vaishnava lists, where Krishna is regarded as the source of all and is considered the Lord himself instead of being just an Avatara. Further in many lists, Balarama is omitted and Krishna is considered as 8th avatara. In some Buddha is omitted and Krishna appears as the ninth avatar coming after Balarama.

However, as Geeta Govind commemorates Balarama as the 8th Avatara we will look at his story. He originated in Vedic times as a deity of agriculture and fertility. His stories are found in Mahabharata, Harivamsha, Bhagavata Purana, Krishna Charit Manas and other Puranas. Vyasa Mahabharata states that after Balarama’s death, he turned into a white snake and entered the present day Arabian Sea.

The ninth avatar of Vishnu is believed to be Buddha. Again there is a debate on this as few of the people include Venkatesha as the ninth avatar of Vishnu. Gautam Buddha was born as Prince Siddhartha around 566 BC to the King and Queen of Kapilavastu. Soon after his birth, an astrologer predicted that Prince Siddhartha was destined to lead the life of a sage and that he would give up his right to the throne and all worldly pleasures. When Siddhartha grew older he became more and more curious. On one particular day, he asked his charioteer to take him on a tour of the city. That tour changed his life and he decided that to get answers!

At the age of 29, Siddhartha left the palace and he wandered far and wide, trying different ways to find the path of truth. Then finally he reached the city of Bodhgaya and started meditating under a large fig tree. After 49 days of meditation, at the age of 35, Siddhartha attained enlightenment. From that day on he was known as Buddha or the ‘Awakened One’.

A commemorative stamp was issued for Jayadeva’s Geeta Govinda depicting Buddha, the ninth avatar of Vishnu, of INR 5. 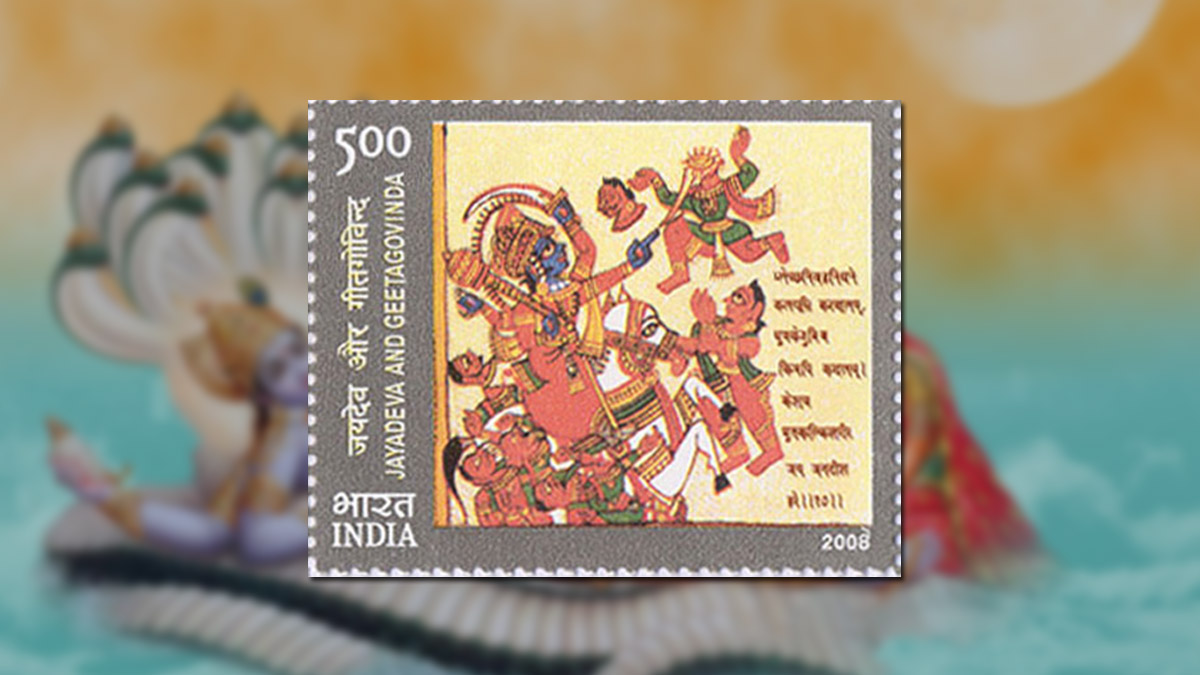 The last or the tenth Avtara of Vishnu which is yet to appear is Kalki. He will appear at the end of Kaliyug and will end the darkest, degenerating and chaotic stage of the Kali Yuga to remove adharma and usher in the Satya Yuga. It is described to appear on a white horse and will yield a flaming sword which will be his weapon with which he will strike down all evil. His appearance will also mark the end of Kali Yuga, after which the Krita Yuga will again begin where purity of mind will reign over all else.

The 10th incarnation of Lord Vishnu is depicted as a blue skinned man sitting on a white horse and slaying the evil around him.

We hope you guys enjoyed our blogs exploring the Incarnations of Lord Vishnu on Stamps. Stay tuned for more of us fun and interesting articles!