Handmade crafts made and designed by the artisan are defined as a handicraft. If we further elaborate Handicraft, it is an art solely created by hand without using any kind of machinery!  The process of making handicraft requires a different type of goods and skilled people who can convert decorative items out of papers, clays, wood, rock, fabric and much cheaper and easily available tools from nature. It is essential to have the favourable geographical condition and skilled labours for the rich tradition of making handicraft for cultures and societies throughout the world. Hence, India has a rich and continuous tradition in creating handicrafts and its antiquity can be traced to the Harappan Civilization. Throughout this vast land, variety of technique, craft and motif are used to create handicraft depending upon the cultural, climatic and geographical diversity. India is privileged enough to possess some very highly skilled artisans and also has managed to preserve these artisan’s art. Till date, many rural communities earned their livelihood from the creative pieces of handicrafts; each state of India has its unique style of handicrafts creation. India is said to be the mass manufacturing base for 80 per cent handicraft supplied all over the world due to its popularity and high demand in the international market.  The fame of these indigenous goods is so prevailing these years that India Post has issued series of commemorative stamp illustrating theme Handicraft on stamps to mark this immortal masterpiece which is unique in its own traditional and cultural ways.

As mentioned above, all of the 28 states of India have developed and flourished their own small and large scale industries of handicraft manufacturing.  These colourful masterpieces are the major attraction landmarks used by the locals to attract tourists. It is also a souvenir to remember the unique culture and tradition of a region. 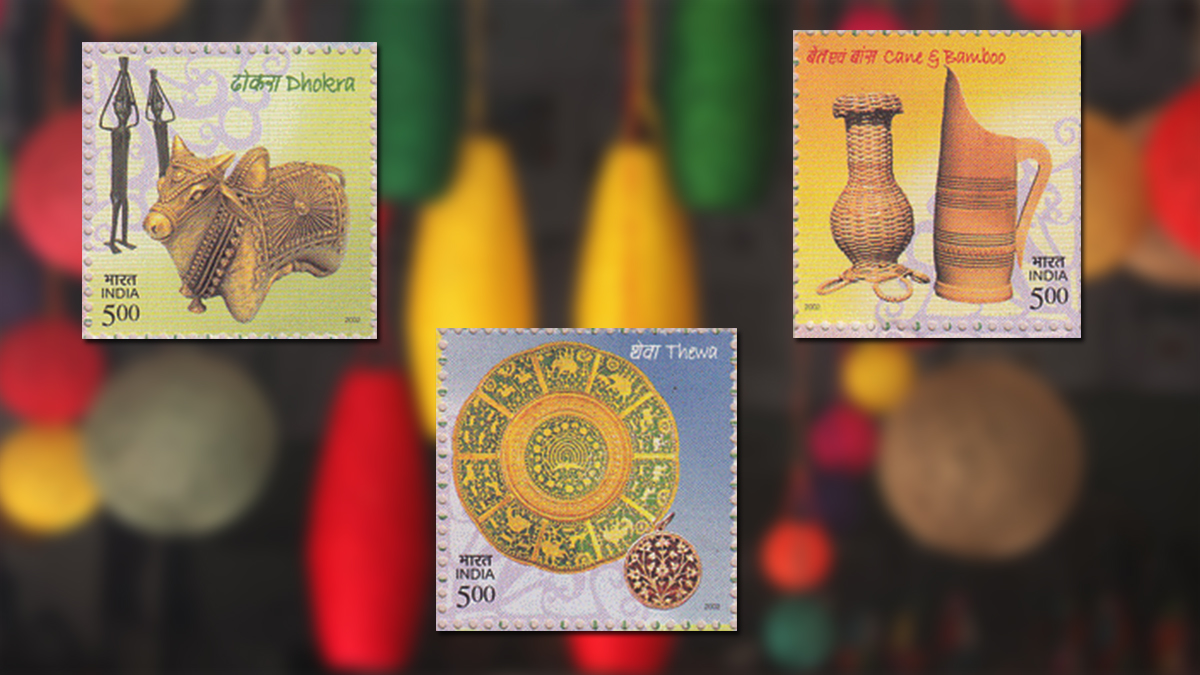 The technique also gets its name from the same tribe. The evidence of Dhokra metal casting is traced to the Indus valley civilization for over 4000 years. The dancing girl found in the excavation of Mohenjo-Daro city is one of the earliest artefacts created by lost wax metal casting technique.

In 2002 India Post issued a commemorative stamp in the series of Handicraft on stamps. The stamp depicted a metal bull cast from this technique; in 2018 the Alidabad Dokra of Telangana was given Geographical Indicator tag.

The traditional jewellery making technique practised in Rajasthan also known as Meenakari.  The ornamentation of this jewellery is done in gold on the coloured glass surface. The technique of making this design is the closely guarded secret passed from father to son.

Though it was developed in 1767, it is believed the art was invented in 1707 by Nathu Lal Sonewal. It received the patronage of the Maharaja of Kishangarh (Princely state) Samant Singh. It was famous among the Kings of Mewar but it flourished during the Mughal period.

India Post issued a set of four stamps in 2002 commemorative series Handicraft on stamps, one of the stamps depict Thewa art ornaments: a plate and a locket with green and red coloured glass with the old metal intrinsic and delicate design over it.

This handicraft has a widespread tradition all over the country. The history of this handicraft can be traced back to the 2nd century AD. The furniture created by cane and bamboo features lucidness and comfort due to aesthetic beauty and appeal.  It covers the wide expanded land rich in the natural recourses such as Assam, Sikkim, Nagaland and Arunachal Pradesh.

The classical literature has talked about the huge bamboo and cane forest in these areas. Ptolemy talks about the hills and marshes of eastern India and referred the uses of these materials for building bridges in the area of Assam. In Hashacharitra, Bana also gives evidence about the highly developed craft sent by King of Assam Bhaskara Varma to Emperor Harsha. The goodies were carried in the baskets of variously coloured reeds, thick bamboo tube and birds in the Bamboo cages.

This handicraft is mostly a household or cottage industry product. No mechanical process is used to produce it. This craftwork has provided part-time employment to cultivators in the lean season and full-time employment for the highly skilled artisans who produce the finest decorative baskets and Chalani.

In 2002 India Post has issued a series of four stamps in a miniature sheet. These stamps depicted different handicraft; one of them features the Cane and Bamboo work. The stamp features a flower pot and jar made of cane and bamboo. 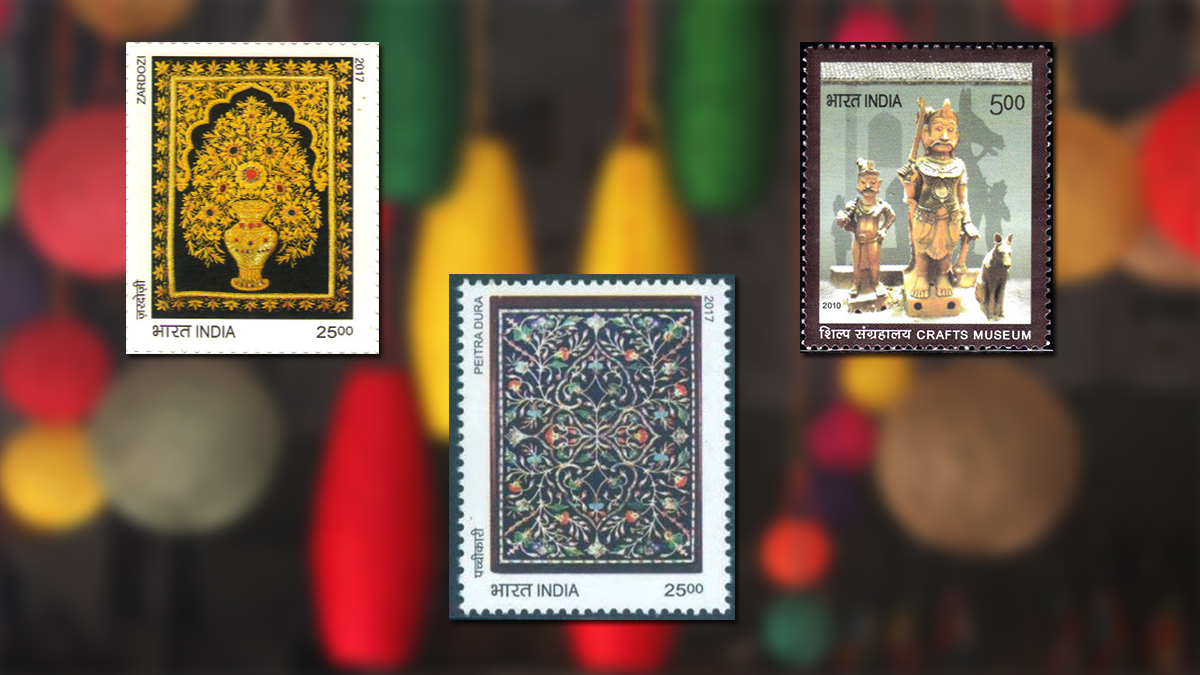 Zardozi is an elaborated embroidery design often created using gold and silver thread. Along with it, precious stones, pearls and beads are also added to the design. This embroidery has a wide range of application. There are historical records that prove that this embroidery was applied not only on clothes but also on household artefacts, textiles and animal trappings. The royals used it on the walls of the royal tent, scabbards, wall hanging and also on types of equipment of royal elephants and horses.

Zardozi is derived from the Persian term ‘ Za’ meaning gold and ‘Dozi’ meaning embroidery. This excellent craft reached its pinnacle during the Mughal period during the reign of Emperor Akbar. Sadly during Aurangzeb’s rule, the patronage stop and the artisan moved to Punjab and Rajasthan in search of work.

Zardosi embroidery work is mainly a speciality of Lucknow, Bhopal, Hyderabad, Delhi, Agra, Kashmir, Mumbai, Ajmer and Chennai. In 2017 India Post issued a stamp depicting a carpet made by the technique of Zardozi embroidery.  In the same year, India Post also depicted a fan of Rajasthan made by the Zardozi designs in “the fan of India series.”

Pitera Dura is an art of carving on a stone. It is mostly used in designing mosaic: it is a work of art done on a hard stone with the different pieces of coloured stones. This art highly illustrates the pictures out of pieces of coloured –stone. This resulted in decorative mosaics that were used in table-top and small wall panel. The pietra dura is an art technique of lapidary marquetry. The works in pietra dura often represent floral motifs, plants, or natural settings. More recently this technique is used to represent geometric shapes.

The words “Pietra dura” come from Italian, it means “hard stone”, but also “semi-precious stone”. This art signifies the hardness and durability of the material used in the work. The stone used in this are quartzes, chalcedonies, granites and various colour-stone. The technique of pietra dura is a Florentine invention on the end of the 16th century, at the time of the Medici.

India Post issued a sheetlet of 12 stamps in 2017 to celebrate New Year featuring the Indian handicraft on stamps, along with sculpture and architecture. The 11th stamp of this block depicts the tabletop showing the famous Pietra Dura.

Terracotta is one of the oldest craft which has taken shape through thousands of years and has developed gradually with the passage of time. The word ‘Terracotta’ means baked sand and as the name suggests, it is used to refer to items made out of earthen clay.

The first example, in India, of advance terracotta craft is found during the excavations of Indus Valley cities. The rich culture of the Sindhu Sarawati civilization had many variants of the pottery and other terracotta products like toys, bangles, seals and beads.

One can boldly claim that every household in India be it rich or poor utilize at least one product obtained from pottery like pots and picture for storage water, earthen pots to grow plants and flower as well as beautiful lamps or Diyas.

Many states in India like West Bengal have a rich traditional Terracotta art. One of the most exquisite examples is the pattern panels of the temple of Bisnupur. The Banknur Horse is also associated with Bengal terracotta art.

The well-known propagator of this art is the state of Madhya Pradesh. The tribe of Bastar makes a beautiful design and intricate statues of animals such as horses, elephants and birds. Other than these two states Gujarat is famous for its hand-painted clay products. Tamil Nadu consists of Aiyanar Cult with popular life-size terracotta figures.

To sustain and commemorate this famous art that is widespread over the continent, the Indian Government established the Sanskriti Museum of Indian Terracotta in New Delhi where terracotta art from each and every state of India is displayed.

India Post has also issued a stamp commemorating this craft of India in 2010. The stamp illustrates the terracotta doll from the craft museum. India Post has issued many such series illustrating the Handicraft on stamps.

The Indian subcontinent has high esteem and value for its craft tradition since aeons. This tradition is followed in India still today due to its high cultural value and preservation. The restoration and sustenance of this traditional handicraft have been a combined effort of the Indian government and many contemporary artists and designers. To further encourage and make it a successful career and profession for many, the institute of Craft and Design are established in Jaipur. Yet these efforts are not enough because the actual creators of this art are on the decline. The cost of material and larger-scale production of handicraft is not affordable for the many artisan communities. Hence the value to this product increases and demand has decreased. As the trends are improvising hand-made stuff have a gradual rise in the market making Indian handicraft a timeless commodity. This unique aspect had increased the appeal of the craft and a gradual rise in its demand is seen in recent years due to its style, antiquity and ethos.