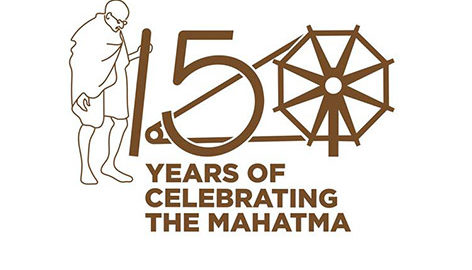 The year 2019 marks the 150th birth anniversary of Mahatma Gandhi. It presents us with endless reasons to celebrate. There events are held through the year not only in India but all over the world in commemoration of 150th birth anniversary of Mahatma Gandhi. India Post too has joined in the celebrations and has issued a set of seven commemorative postage stamps on account of Mahatma Gandhi 150th anniversary date.  These stamps were issued on 2nd October 2018 and these stamps are unique in their shape and denominations. First time in its history, India Post is releasing circular shaped stamps in miniature sheet format. Let’s have a look at the special Circular commemorating Gandhi’s 150th Birth Anniversary stamps.

“My life is my message”

These special Mahatma Gandhi Postage Stamps attempt to portray the man whose life was an inspiration to many! Depicting various quotes and incidences of Gandhiji’s life, these stamps are like an ode to Gandhiji, the Father of our Nation! 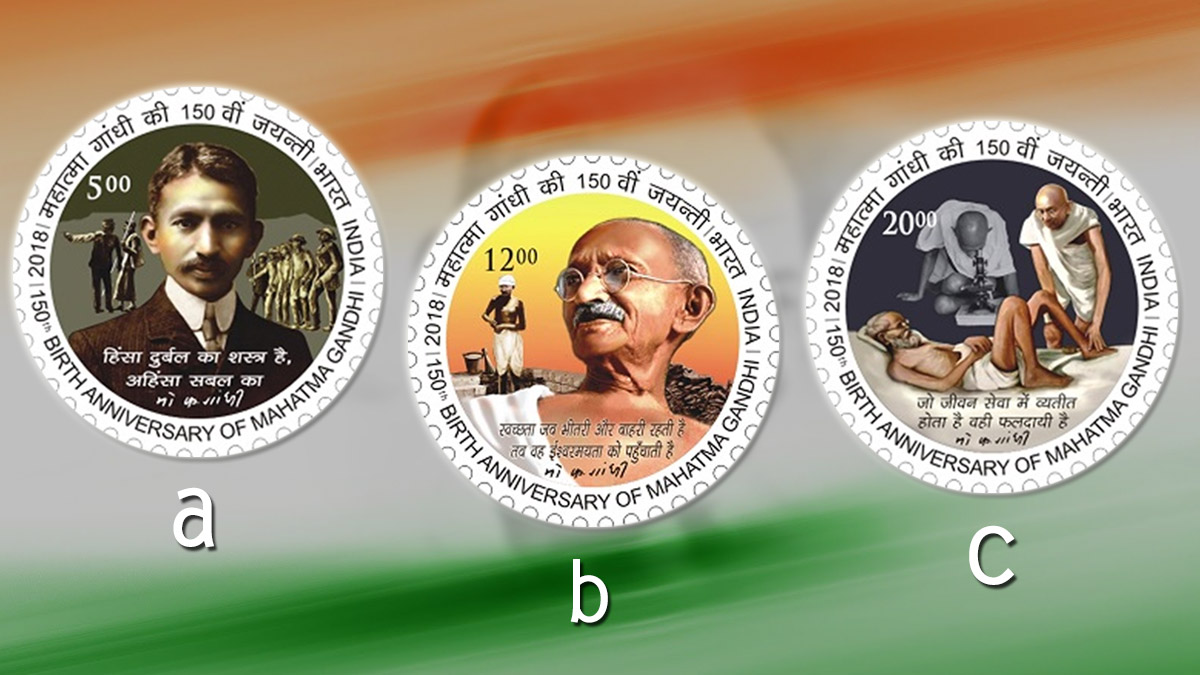 – The first stamp (image a) of INR 5 depicts a young portrait of M.K. Gandhi with the Satyagrahis gathering for a non-violent protest (Sabal) against the armed might of a British Raj force (Durbal).

Mahatma Gandhi is known for his philosophy and principles that were unusual to the contemporary world that was preoccupied in wars, fights, and violence. His philosophy of Ahimsa or Non-violence was one such beacon of hope for many to protest against subjugation.

-Mahatma Gandhi was a person who believed in “lead by setting an example” and he acted what he preached. The second stamp design depicts this great man getting ready to clean his surroundings with a bucket and broom with an aged portrait of Gandhi ji in the foreground.

The stamp of INR 12 (image b) depicts a quote and signature in Hindi “Swacchta Jab Bhitari Aur Bahri Rahti Hai, Tab Vah Ishwarmayta Ko Pahunchati Hai” – meaning “When there is Cleanliness both inside and outside, then only one attains Godhood”.

The Swachh Bharat Campaign pledges to fulfil the mission and dream of Mahatma Gandhi to have a clean and hygienic India.  The Pradhan Mantri Swachh Bharat Abhiyan is the most significant cleanliness campaign by the Government of India which has pledged to clean India as the best tribute India could pay to Mahatma Gandhi on his 150 birth anniversary in 2019!

-The third stamp of INR 20 (image c) depicts an image of Mahatma Gandhi tending to a sick elderly person in the foreground, with an image of him examining a culture through a microscope in the back.

The stamp bears a quote and his signature in Hindi “Jo Jeevan Seva Mein Vyatit Hota Hai, Wahi Phaldayi Hai”. When roughly translated it means “A life which is spent in serving others, that life is a useful one”.

Mahatma Gandhi was a man who strived his entire life for the betterment of others. Tending to the medical needs of his father at a very young age imbibed in Mahatma Gandhi the qualities of compassion and servitude. He would help dress the wounds of leprosy affected people and help inspect latrines during the epidemic of plague. Gandhi believed in importance of cleanliness and service for the betterment and wellbeing of all. 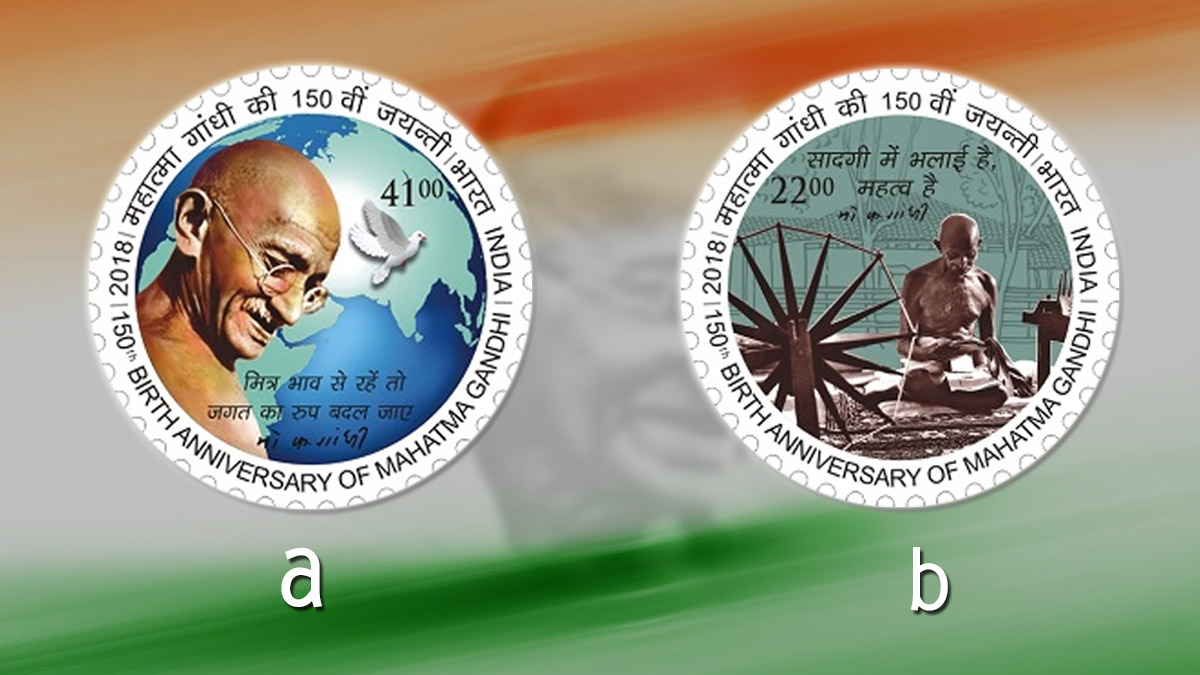 -Mohandas Karamchand Gandhi, popularly known as Mahatma Gandhi or Bapu, a renowned political figure in India has become the object of worship and inspiration not only for the Indians but for the world all over. These stamps issued in his memory are solid proof of the respect he is given by the whole world.

A staunch advocate of world peace, the essence of Gandhian philosophy was promotion of a culture of peace and nonviolence. This philosophy of Gandhi is perfectly depicted in the INR 41 stamp (image a) which bears an image of an elderly Mahatma Gandhi facing right, in the background is a white dove symbolising peace flying across India on the globe.

The stamp bears a quote and his signature “Mitra Bhaav Se Rahein Toh Jagat Ka Roop Badal Jaaye” when translated in English it means “If everyone lives with a feeling of friendship, then the whole world will undergo a change”.

-The strength of his character and simplicity is something of an inspiration too. When we think of this great Mahatma the image that comes to our mind is of a simple, kind old man wearing simple clothes. The world knows Mahatma Gandhi as a bespectacled skinny man wearing a loincloth and a shawl wrapped around his shoulders.

But how did he come to dress this way…On his way to Madurai, he had seen farmers and poor wear a small towel like dhoti around their waist. It was then that he took the decision to dress in a simple way just like so many of the people of his beloved country dressed.

This INR 22 stamp (image b) depicts an image of Mahatma Gandhi spinning yarn on his “Charkha” at Sabarmati Ashram. The quote that accompanies this image is “Saadgi Mein Bhalai Hai, Mahatva Hai” – meaning “Simplicity leads to welfare and has meaning”. 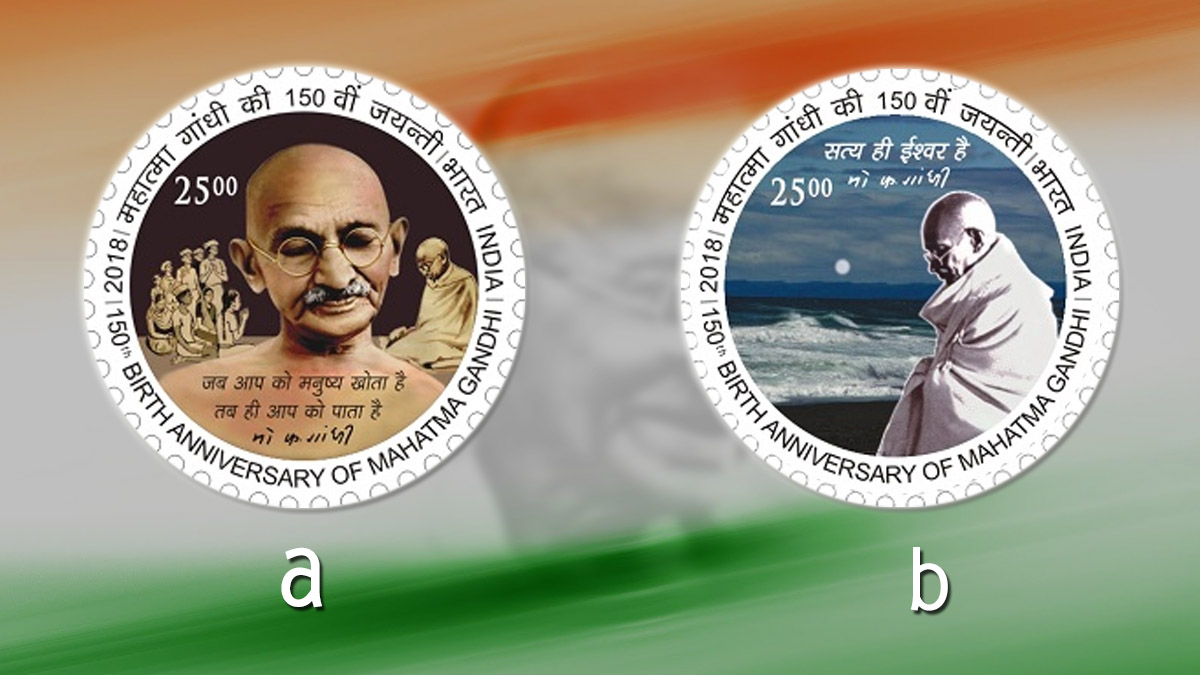 -Teachings of Mahatma Gandhi spread all over world inspiring many political leaders who successfully followed the path shown by him. Martin Luther King was awarded the title of “Gandhi of the West”. In spite of influencing and inspiring a hoard of world leaders, Gandhi never had pride. He was remarkably open and self-aware.

“Man finds himself by losing his self”

The INR 25 stamp (image a) features an image of Mahatma Gandhi in foreground with a scene depicting a group of youngsters at Sabarmati Ashram watching him meditate. The stamp also bears a quote from him “Jab Aap Ko Manushya Khota Hai, Tab Hi Aap Ko Paata Hai” (in Hindi) – meaning “A person embarks on a journey of self-discovery only when he loses his self” with his signature beneath.

-Of all the moral principles, Gandhi placed truth as the first and foremost. He called it “the sovereign principle”, which included numerous other principles. The two pillars of Gandhism are truth and non-violence…

Mahatma Gandhi is often quoted saying that “The truth is far more powerful than any weapon of mass destruction”. And how true it is!

The INR 25 stamp (image b) shows Mahatma Gandhi facing left near a calm moonlit sea at one with nature and the universe. The stamp bears a quote from him “Satya Hi Ishwar Hai” (in Hindi) – meaning “Truth is God” along with his signature.

It not just through stamps that the great soul is remembered on his 150th anniversary but through various coins as well. We have compiled a few of the coins that celebrate this historic year. You can read about the coins here: Celebrating 150th birth anniversary of Mahatma Gandhi through coins!