Elephants play a very important role in many cultures and traditions. But we do not have to go deep into the “cultural” and “religious” significance of these majestic animals to understand why they are such a hit with the public! Just type ‘elephant’ in your Google search and you will find so many adorable videos and images of elephants. Right from the “Manny” of Ice Age (although Manny is a mammoth) to “Snorky” of the Banana Splits Club, our cartoons, movies and Facebook walls are full of cute elephants. Today we find elephants all over the social media, but in the ancient and the medieval times, they adorned various paintings, sculptures and coins! Let’s continue our journey of exploring elephants on Indian coins.

The tribal states of India also called as the Janapadas[1], form a very intriguing part of Ancient Indian history.  The Punch Marked Coinage of these various Janapadas, Mahajanapadas and later the Imperial Mauryas, had a wide spectrum of symbols punched on them. And this mighty elephant is a recurring motif on most. 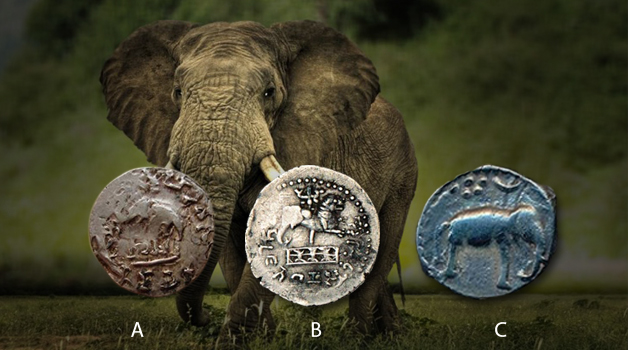 Vemaki: An ancient India tribal nation of north India, the Janapada of Vemaki finds mentions in Mahabharata and Brihatsamhita. Coins of this tribal state are generally identified into four distinct series, out of which two are classified according to motifs found on them[2]. Needless to say, elephants are a recurring symbol on them.

Vrishni: Vrishni, popularly believed to be the clan of Lord Krishna, was a tribal state in ancient India. The Puranas claim Vrishni to be located near Dwarka and its people to be descendants of Yadu. Panini’s Ashtadhayi, Kautilya’s Arthashastra and Vyas’s Mahabharata all mention Vrishni Janapada.

A silver coin (B) of Raja Vrishni found in Hoshiarpur, Punjab by Alexander Cunningham has on it’s an obverse a mythical creature (half lion and half elephant) within a railing with a circular Brahmi legend ‘Vrishniraja Jnaganasya tratarasya’ and a twelve spoked chakra in pellet border with slightly truncated Kharoshthi legend ‘Vrishniirajanna(ganasa) tra(tarasa)’ on the reverse. Later few copper coins were also attributed to this janapada.

Western Kshatrapas: Considering the popularity of the animal, it will be surprising not to find elephants on Western Kshatrapa coins. A dynasty that probably had Scythian origins, Western Kshatrapa was a major ruling dynasty for over 200 years in western India. This dynasty is also known for their remarkable consistency in coinage.

A potin coin (C) from Damasena’s ruling period has an elephant standing right, sun and moon above on its obverse and on the reverse a chaitya (3-arched hill), the river below, crescent moon and sun above, with a date 153 (Saka era) below.

Elephants are almost synonymous with India and you just cannot imagine South India without them! A trip down south will be absolutely incomplete without going on elephant safaris and nature camps. So obviously this majestic animal was an integral part of South Indian coinage too.

And while talking about the South we cannot miss out on the strong empires of the Chola, Cheras and Pandyas which were the three longest ruling dynasties of South India, each of which flourished during the Sangam age and achieved awe striking developments in literature, art and architecture. These mighty empires (Cholas in particular) find a mention in the 3rd century BCE inscriptions of Mauryan king Ashoka.

They were powerful dynasties from the Tamil Sangam ages who continued their rule from ancient till the medieval 13th century CE. Many lustrous kings graced this land and extended their rule beyond the Indian Ocean. Their coinages are rich in design, metal varieties and innovations and as always elephants have played a very vital role in them. Let’s have a look: 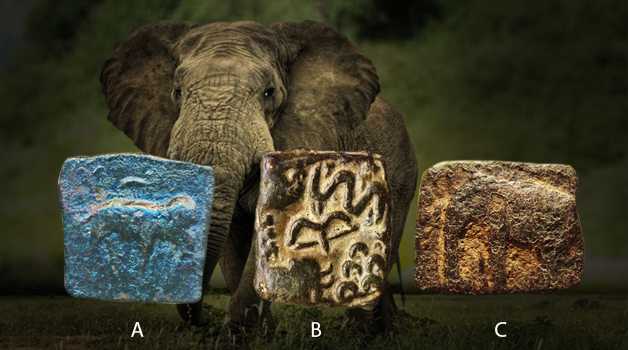 Chera: This Chera copper (B) of 6.9 grams has an elephant walking to the right in the front of six arched hill, bow with arrow, snake and battle axe depicted on its obverse and the Chera dynasty symbol of the bow and arrow on the reverse.

Pandya: Depicted here is a 2.5 gram copper coin (C) of yet another jewel of South India, the Pandyas. Being in circulation from 1st – 2nd century CE, the obverse of the coin depicts an elephant facing left and the Pandya fish emblem (fish swimming below a flowing river) on its reverse.

Finding really good specimens of Sangam Age coins is rare but whatever their condition they have played a very important role in providing source studies for the ancient Tamil history. Especially the ones minted by the Tamil Kings are direct pieces of evidence of the Tamil polity during the Sangam age. Interestingly elephants became rarer in the coins minted during the medieval times of these dynasties.

But the journey of the elephants on Indian coins does not end here. They continued to be portrayed in the coinages of various dynasties of the South in ancient and medieval eras as well. 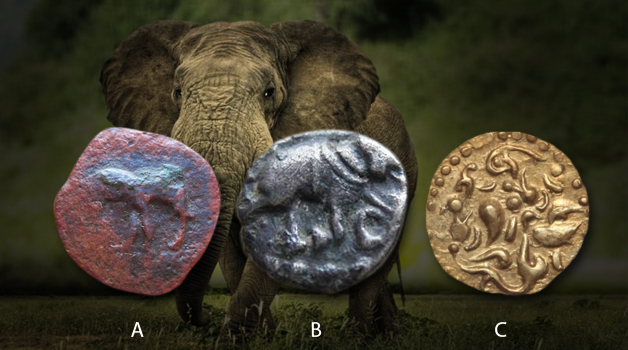 Depicted here is the Badami Chalukya coin (A) of King Jayashray Mangalarasa who reigned during 596 – 610 CE. The Chalukyas of Badami ruled in the north Maharashtra & South Gujarat regions. This copper coin has on its obverse an elephant facing right and on its reverse has a sun depicted above a Brahmi legends ‘Sri Jayashray’ in the centre with an inverted crescent below.

Yet another branch of the Chalukyas, popularly known as the Solanki Chalukyas of Gujarat or the Later Chalukyas, too has an elephant on their coins. This silver masha coin (B) weighing 0.38 gram is of King Siddharaja Jayasimha. The obverse of the coin depicts an elephant walking to right with a long trunk touching the ground while the reverse had an early Nagari legend which reads “Jaya Si / Piya [Srimaj Jayasimha Priya]” or “Srima Jayasimha/Priya”.

The Kalachuris of Ratnapura, a dynasty that ruled parts of modern day Chhattisgarh during 11th and 12th centuries CE. The Kalachuri rulers of Ratnapura issued gold, silver and copper coins, which bear the issuer’s name in Nagari script. Out of the basic four designs, the most famous is the “Gaja Shardula”[3] type coins. Such scene of a fight between a tiger and an elephant was very often seen on coins. There are just four instances of rulers who issued coins with such a design, three of which are Ratnapura rulers and one a Rashtrakuta.

The 41/2 Mashas gold coin of King Jajjala Deva II depicted here (C) features a Gaja-shradula (a tiger mounted on an elephant) on its obverse within dotted border while the reverse of this 3.8-gram coin depicts legend is Devanagari script in two lines “Shri mat Jajjala Deva”. 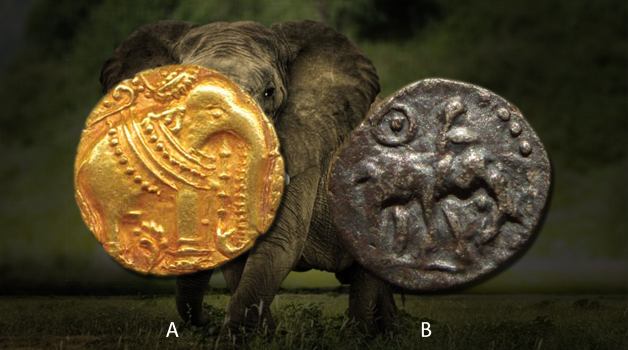 Some of the most ornamental depiction of this majestic animal is seen on the coins of the Western Gangas. They were an important ruling dynasty of ancient Karnataka. This gold pagoda (A) of 3.74 grams has a caparisoned elephant to right chewing sugarcane, with a conch shell and a ‘chatra’ above the elephant’s back. The reverse depicts a scrollwork. Elephants were never depicted so beautifully in any coinages as those in the Western Gangas, don’t you agree?

The mighty dynasty of the South, the Rashtrakutas need no introduction. They ruled over large parts of the Indian subcontinent between the 6th and 10th centuries CE. Even if their origins are obscured, the latter part of their history is much celebrated. They are famous for the tripartite struggle for the resources of the rich Gangetic plains with the Palas of Bengal and the Pratiharas of Malwa.

Their rich coinage has elephants, a mark of absolute might and power, depicted on them. A silver 0.46 grams drama coin (B) has on its obverse an elephant walking towards right mounted by a human figure (maybe king/mahout), a chakra/wheel with a dot in the centre, dotted border around. The reverse proudly boasts a seated goddess in Padmasana posture with hair bun & halo around with long ears, traces of Brahmi legends around.

Some coins of Hoysala and Kakatiya dynasties too have elephants depicted on them. 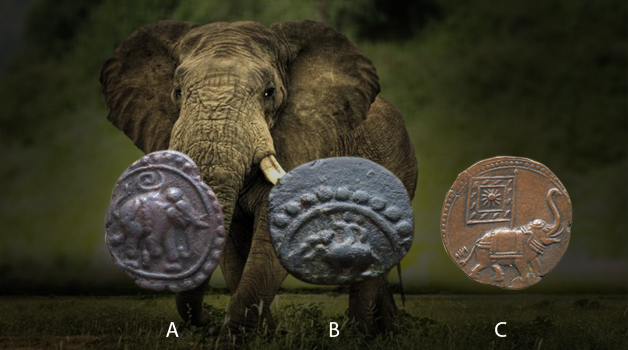 The mighty and the lustrous Vijayanagara Empire who procured architectural gems (Hampi) are no less when it comes to their coinage. They too have depicted elephants on their coins. Known for their complex currency systems, their currency structure was followed by their many feudatories too. Depicted here is one such Vijayanagar – Feudatory Issue copper coin (A) of king Devaraya II who reigned from 1425 to 1446 CE. The coin’s obverse depicts an elephant facing right within a circular frame with dotted outer decoration with letter ‘LA’ above the elephant. The reverse had a two-line Telugu Legend: KHA NA / DA NA YA / KA RU – Dhandanayaka[4].

The ‘Tiger of Mysore’ Tipu Sultan of the Kingdom of Mysore was a legendary ruler who not only opposed British rule in South India but also played a major role in keeping the British forces away from South India. He was known for introducing innovative administrative schemes and military technology.

This Othmani / Double Paisa depicted here (C) is a copper coin minted in 1218 Malgudi year. The Coin depicts on its obverse an elephant facing right with an uplifted trunk; flag above the elephant; date 1218 written on the tail which is all within a double lined circle, with a row of dots in the middle. The reverse has a Persian inscription “Othmani Pattan Zarb Darul Sultanat”.

The legacy of depicting elephants continued in the modern era too with the Princely State of Travancore issuing coins with elephants. This copper Thira Kashu / Kasu or Cash (B) of Maharaja Karthika Thirunal Rama Varma of the Royal Family of Travancore was issued in 1797 CE. Depicted on the obverse is a man/warrior or a mahout holding Ankush, riding an elephant with huge tusks marching left within circular border decorated with dots. The reverse a blossomed lotus flower within circular border decorated with dots. 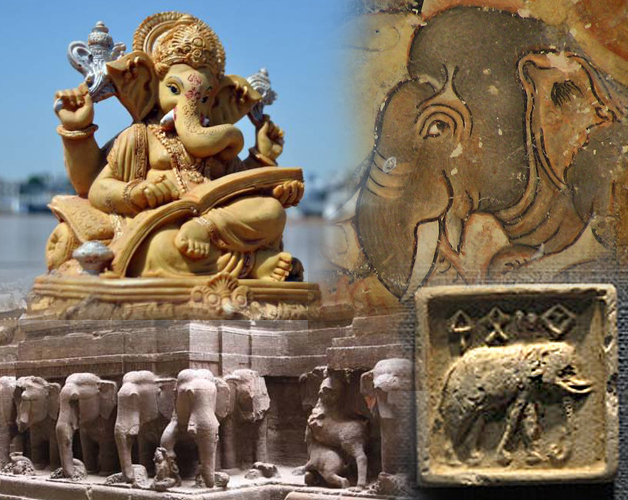 Considered as symbols of good luck and fortune, elephants have played a major role in Indian religious ceremonies, social functions and popular arts. A representation of wisdom, loyalty, strength, honour, stability and persistence, the elephant has for long exerted a powerful hold over the human imagination and Indian numismatic art is no exception.

Making an all-inclusive list of dynasties and kings who issued coins with elephants on them will in itself be a mammoth task. But we are sure you would have enjoyed this brief journey of discovering elephants on Indian coins with us.

Do you have any coins that you would add to this list? Comment away…let’s hear from you!

[1] Mentioned as groups of wandering “janas” (people) in Rigveda, Sutras and various Buddhist and Jain epigraphs.

[3] Gaja-shardula design depicts a fight between a tiger and an elephant. This design occurs on all Kalachuri of Ratnapura dynasty’s  gold coins, and on some of their copper coins too.

[4] In the name Of Naganna Dannayaka Viceroy of Mulbagal. Issue: Lakhana Dandanayaka. The name Dandanayaka means a leader for a military group i.e a commander/captain. He was appointed by King Devaraya to carry out his military exploits to Ceylon.