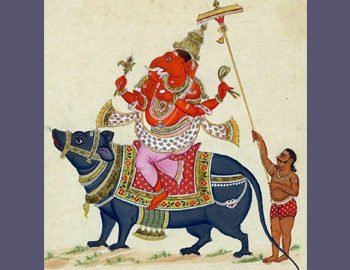 The cute pot-bellied god ‘Ganesha’ is appreciated and worshipped beyond India also.  He is popularly known as ‘The Elephant-headed God’ and is usually a favourite god of children. The earliest reference to Ganesha is found in Rig Veda. It is believed that Ganesha was born from the dirt of Parvati. He is worshipped in every corner of India, but do you know that he is worshipped beyond India too? Not only that, these countries even have Ganesha on stamps!

Before we take a ride beyond India, let us see the significance of Lord Ganesha within India.

Ganesha is always remembered and offered prayers prior to any other god on special occasions and ceremonies. He is worshipped to ensure wealth, prosperity and success. Known as the God of learning and knowledge, his devotion teaches one to be responsible and be farsighted enough to differentiate between good and bad.

As we all know that in Maharashtra, Ganesha Chaturthi is celebrated with lots of pomp and show, it falls in the Hindu calendar month ‘Bhadra’ (Between mid-August or September). The clay idol of Ganesha is brought at home for a period of one and a half day to ten days; he is worshipped daily with aartis and his favourite food, modak. On the tenth day, the idol is taken on a procession through the streets and then immersed in water after a puja on the banks of a river. The immersion is done with people shouting ‘Ganapati Bappa Morya Pudhcha Varshi Laukar Ya’. Every year the devotees of Ganesha wait for this festival to come!

Hinduism has influenced many East Asian countries and Ganesha is one of the deities to be well known across the globe. The worshippers could not resist this cute headed elephant god.

Let us see what other countries think of our beloved God, Lord Ghanu Baba.

Ganesha is called Phra Phikanet or Phra Phikansuan in Thailand. He is the God of fortune and success and is believed to be the remover of obstacles. He is seen in various temples of Thailand with Lord Buddha. One of the most iconic Ganesha can be seen on the walls of the Royal Barge National Museum. Ganesha is also seen at the opening of the Television shows and series of Thailand.  He sits on a high pedestal outside the Bangkok’s Central World, where people offer flower and incense to him. 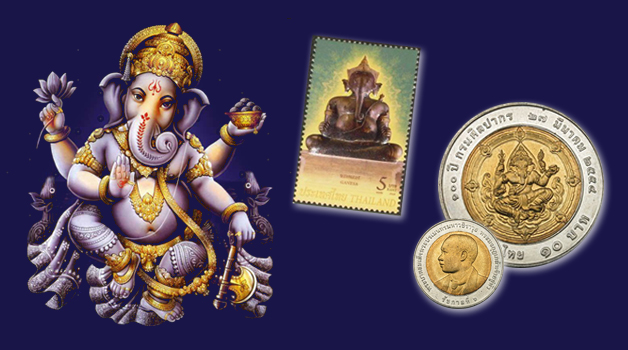 To honour this Indian deity, Thailand issued a stamp in 2009 of having the face value of 5 Baht.

Now let us go a little further and see what Indonesia thinks of Lord Ganesha!

Though Indonesia is the country consisting highest population of Muslims, Hinduism is still revered there. This beautiful country has many sculptures of Hindu deities. Also, Ramayana and Mahabharata stories are popular among the locals. Like other Hindu deities, Ganesha is also worshipped here. The Bandung Institute of Technology has a Ganesha as their logo. 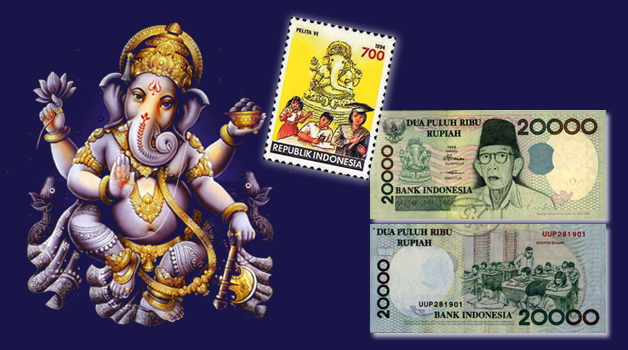 Indonesia issued a stamp in 1994 depicting a Ganesha at top centre and students studying below. This stamp truly signifies the association of Shree Ganesha with knowledge.

Have you seen Lord Ganesha on the Bank notes?

Indonesia is one of the countries to adopt our dear Ganesha on their notes! Yeah, you heard it right. This fact is not known by many. But it is true, Indonesia issued a 20000 Rupiah note which depicts Lord Ganesha on the obverse along with the picture of Ki Hajar Dewantara whose birthday is celebrated as National Education Day in Indonesia. The reverse depicts students studying in the classroom.

Here again, Ganesha is more intensely associated with the ‘God of Education’. And this also shows the influence of Hinduism in other countries.  Isn’t this is wonderstruck?

Nepal follows many Indian traditions as the majority of the population is Hindu. There are many sacred Ganesha shrines in Nepal. The four popular shrines are Chandra Binayak, Suriya Binayak, Karya Binayak and Jal Binayak. To honour this God, Nepal issued a stamp of Nepali 2 Rupee depicting the Maru Ganesha temple of Kathmandu. 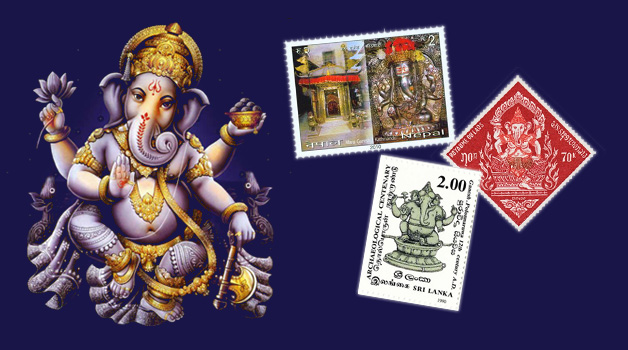 Ganesha is worshipped in the countries like Laos and Srilanka also. Laos shows seated Ganesha depicted on a stamp which has a face value of 70 Lao Kip.  Sri Lanka also issued a stamp which portrays Ganesha seated on a Lotus pedestal of Sri Lankan 2 Rupee. Mozambique is also known to issue a Stamp on Ganesha.  Even Czech Republic has issued a stamp of 24 Koruna where it depicts the whole family of Ganesha with Mata Parvati and Lord Shiva. 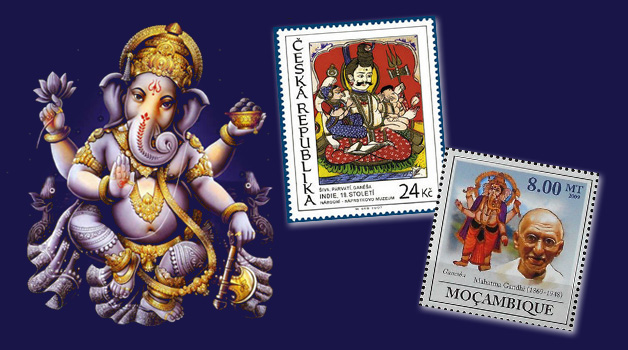 These stamps, coins and notes show the importance of the Lord Ganesha in other countries. Everyone loves him with a whole heart. His elephant head makes him look unique than more gods.  This pot belly Ganesha is the most revered and celebrated god throughout the World. After seeing so many facts it justifies our title ‘Bappa beyond India’.