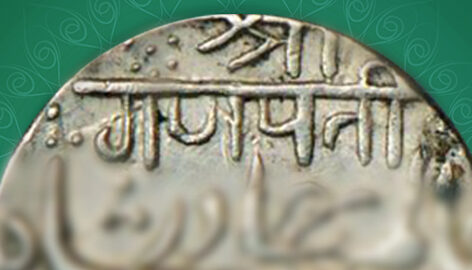 “The one who has a Curved Trunk, Who has a Large Body and Whose Splendour is similar to Million Suns”! Deep in a cave on a hill in Vidisha, Madhya Pradesh, archaeologists found a Gupta Era sculpture which is believed to be the oldest dateable representation of the Elephant God Ganesha. The Udaygiri Ganesha is considered to be the oldest representation of the Lord Ganesha in the country. Apart from these sculptural marvels, the Elephant God Featured on Coins is a marvelous example of skilled artisanship.

Before we begin the topic of discussion “Elephant God Featured on Coins”, let’s find out how he got the head of Elephant! This one day Parvati was taking bath and there was no one to guard her. So she created a young boy with a sandalwood paste and named it as Ganesha. Parvati asked him not to allow anyone to enter while she bathed. Soon Lord Shiva returned and was surprised to see Ganesha. Ganesha refused to allow Shiva to enter the house. After a long fight between Shiva and Ganesha, Shiva cut off Ganesha’s head. When Parvati saw this she started crying and was very upset. Shiva tried to console her but she could not stop crying. Shiva asked Nandi to bring the head of the first creature he found. Nandi returned with the head of Elephant and this head was put on the body of Ganesha and this how he came back to life! Shiva then gave him the title Ganapati. He is worshiped and remembered when starting any new auspicious occasion

Ganesha is always remembered and offered prayers prior to any other god on special occasions and ceremonies. He is worshipped to ensure wealth, prosperity, and success. Known as the God of learning and knowledge, his devotion teaches one to be responsible and be farsighted enough to differentiate between good and bad. Indian Rulers portrayed various gods and goddesses on their coins. Without the doubt many rulers have Elephant God Featured on Coins.

Elephant God Featured on Coins of Nayakas of Madurai

The Nayakas of Madurai was the Tamil rulers, who ruled from around 1529 until 1736, with Madurai as their capital. The Nayak reign was an era noted for its achievement in arts, cultural and administrative reforms, revitalization of temples, and the inauguration of a unique architectural style and other art forms. The Nayaks of Madurai issued a wide range of copper coins. Some early Madurai Nayaka coins portray the figure of the king. The Madurai Nayakas were famous for portraying Hindu Pantheons on coins. 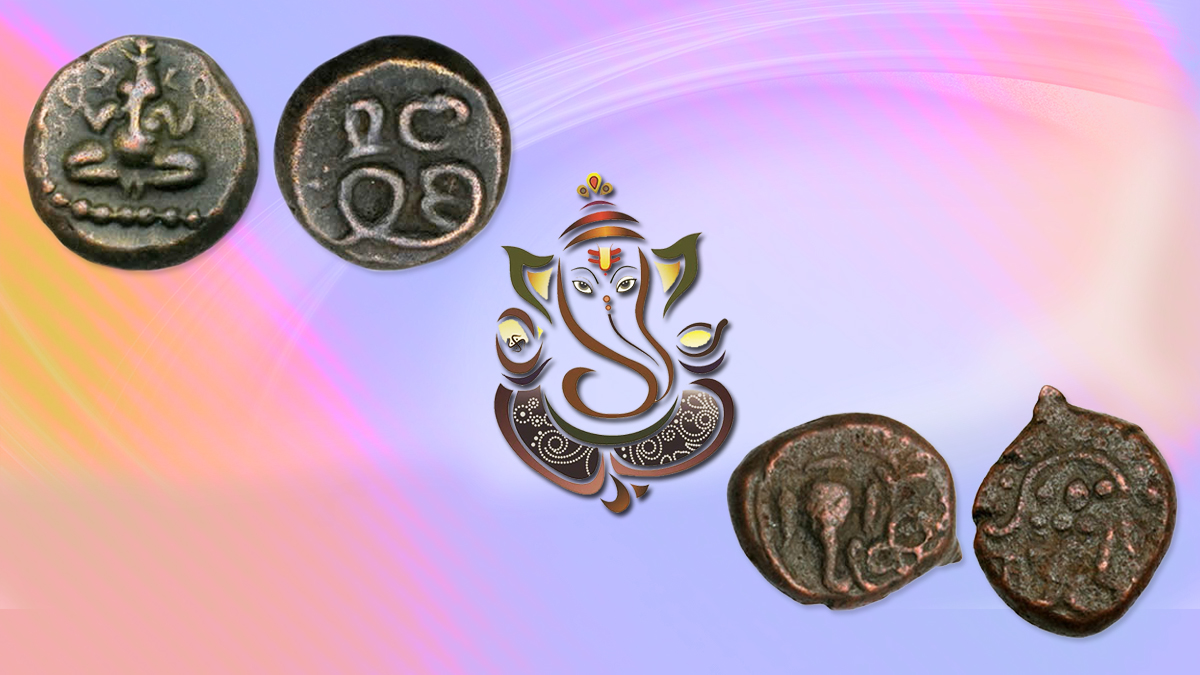 One of the Copper Kasu of the Nayakas of Madurai depicts, on the obverse, a seated figure of Lord Ganesha facing front with his both hands raised and holding divine weapons. The reverse depicts Tamil Legends probably the name of the king.

Another Copper Kasu of Madurai Nayakas depicts Head of Lord Ganesha with a large trunk in the center Tamil legend in the right field reading Sri Vira on the obverse. The reverse depicts Parvati the mother of Lord Ganapati standing and facing front within a circle and dotted border.

Elephant God Featured on Coins of Rajas of Shivaganga

Sivaganga kingdom was founded by Sasivarna Periya Udaya Thevar in 1730. The Kingdom of Ramnad originally comprised of the territories of Ramnad, Sivaganga and Pudukottai of today. Regunatha Sethupathy alias Kilavan Sethupathy, the 7th King of Ramnad reigned between 1674 and 1710. Kilavan Sethupathy, came to know of the bravery and valor of Peria Oodaya Thevar of Nalukottai, 4 Kilometres from Sholapuram near Sivaganga. 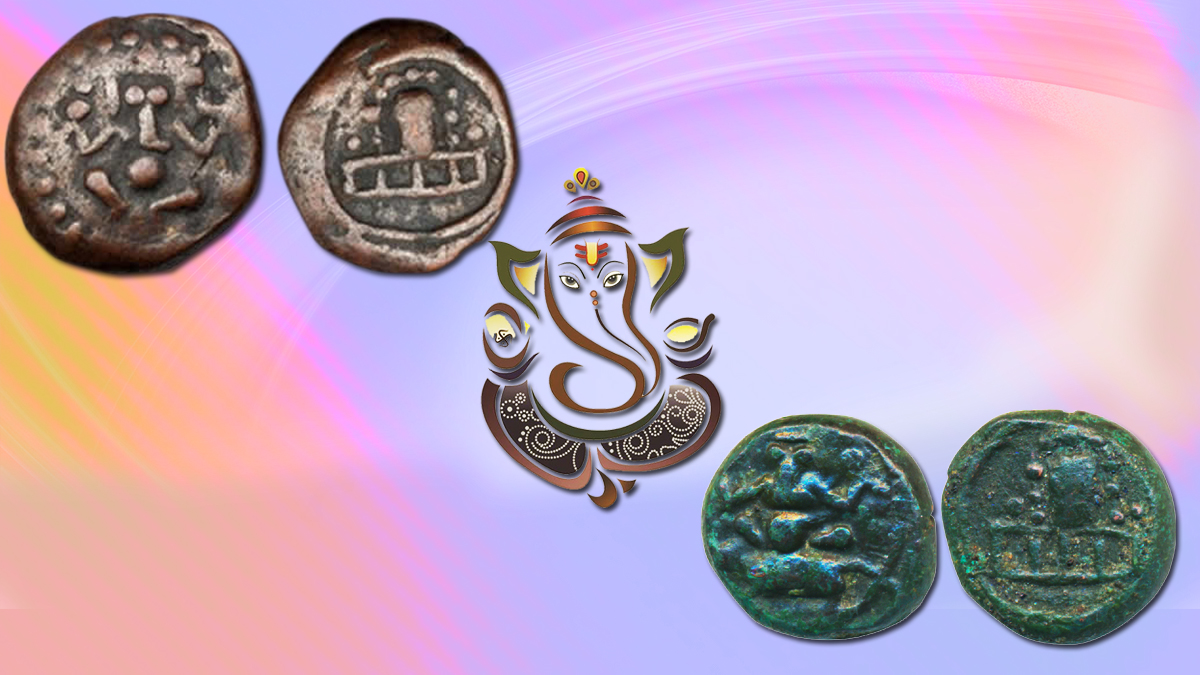 The worship of Ganesha in Tamil Nadu is perhaps the most ‘egalitarian’ of the worship of all gods and Ganesha is an integral part of Tamil Culture and also of the Cheras of the Kongu country. The above coin is a Copper Kasu issued by the Independent Kingdom of Kongu Cheras. The Obverse of the coin depicts Ganesh sitting crossed legs and the reverse depicts Lakshmi sitting in kamalasana. 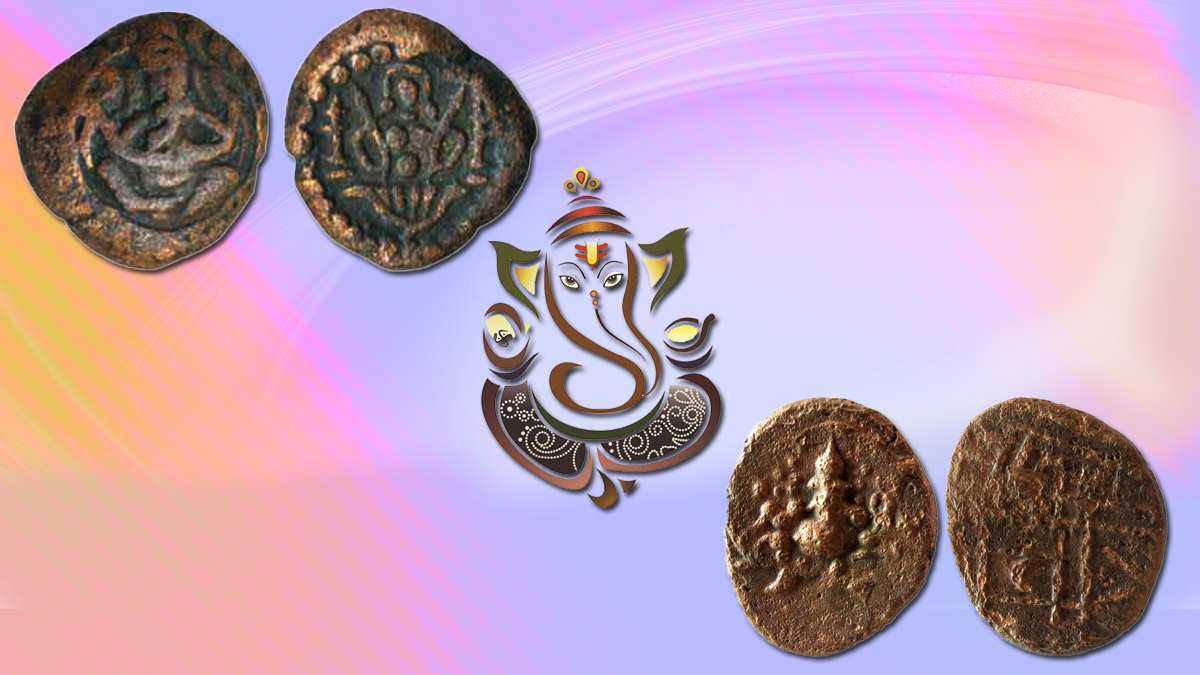 Another interesting piece of numismatics is the Elephant God Featured on Coins of the Sultan of Mysore. The otherwise Muslim Ruler was known for praising Ganesha and Saraswati as well as the Sufi saint Hazrat Banda Nawaz and erecting temples. This copper Kasu is the testimony of that. Elephant God Featured on Coins of Tipu Sultan is depicted sitting on an asana (stool) facing front with potbelly with both the hands raised sideways and holding divine weapons. The reverse depicts a grid of lines showing traces of Nagari letters reading like Shri / Pa / Ja.

Ganesha is one of the most popular gods of Hinduism. Ganesha means lord of the ganas. Ganesha occupies an important place in Vedic rites and rituals. Without him, no “puja” is supposed to be complete. Unlike those of some deities, representations of Ganesha show wide variations and distinct patterns changing over time. He may be portrayed standing, dancing, sitting down or on an elevated seat, or engaging in a range of contemporary situations. Lord Ganesha is a popular figure in Indian art and crafts. Numismatics is no exception.