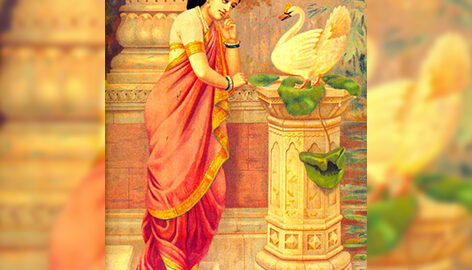 The great things about fashion are that it always looks forward- Oscar de la Renta! The universal language which conveys the though without speaking is fashion. Since eons fashion has changed according to society’s needs. For many, changing fashion is also a cultural status or style statement. Fashion changes with age, profession, location, and class order. Fashion is basically defined by the cloth individual wear. In India different kind of clothes and costume has evolved through the ages. To mark this phenomenal development in the traditional and culture quote of Indian culture India issued a series on stamp depicting changing fashion on stamps also know as fashion through the ages. 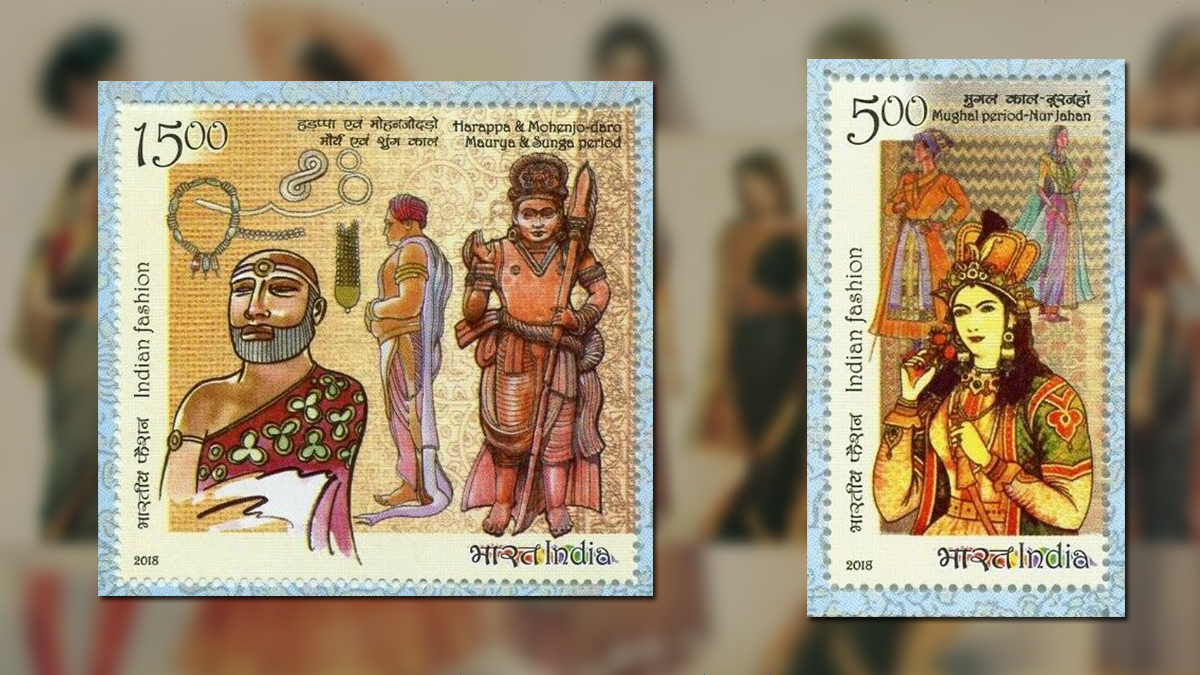 India was the first place where cotton was cultivated and used, it evidence in the Harrapa culture in the Indus-Saraswati civilization. The remnant of the ancient cloth is discovered from sites. The earliest evidence is found from the figures of the odder goddess found from the site of Mohenji-Daro wearing an elaborated headgear supported by a pair of bands, tight-fitted tunic, and skin fastened with waistband using medallion link clasp.

Another is the priest-king sculpture with its head-band and leaf shape design on its shoulder indicating a fort of body-cloth. Another sculpture was found with long-robs. The clothing system in Indus-valley was related to people’s social and economic status. The upper class wore fine muslin garments and silk fabric while the common wore garments made up of local fabric.

India post introduced fashion on stamps series in 2019 to mark the origin of the cloths. The stamp depicts the priest-king. The purpose to introduce to these stamps was to convey the history of India’s diverse costumes and garments origin and history.

After the decline of the first civilization the later use of cloth become prominent during the second civilization ( Mahajanapada) and Mauryan time were unstitched cloth was used. In the later period, Kushan bought the concept if stitched cloth with them. It was also a whole door opened for a new concept of fashion.

The most common attire of people in this period was antariya which they used to wear as a lower garnet. A cloth was covered in ‘lehenga’ style to form a tubular skirt. An embellished long piece of cloth wrapped around the waist pleated into the antariya was called ‘patka’. Meganthese introduces about the coloring and hand-print of cloths. As an upper garment people grab was ‘Uttariya’. The difference of cloth in the way it was worn, as the unstitched cloth it was easy o manipulate it.

The stamp depicts the dawarapala and the painting of the men with Maurya-sunga attire. The period saw the rise in the trade and economic status of the people and the country. The fashion on stamps was illustrated vividly and beautify.

The traditional attire of India that we see today has its great influence during the Mughal period. The concept that we called fashion was quite popular with the Rajputs and Mughal during that time. They exerted great importance on the dressing style. Men wore Jama which was considered as the main royal grab of Mughal emperor, patka to keep the jeweled sword around the waist of Jama.

The Patka is a type of girdle made of a fine fiber that is hand-printed, printed, or embroidered and choga embroidered. Mughal women wore a large variety of ornaments from head to toe. Their costumes generally included Peshwaj, Yalek, Pajama, Churidar, Dhillia, Garara, and Farshi which included head ornaments, anklets, and necklaces.

India Post issued a stamp depicting the most stylish lady of the Mughal period wife of Emperor Jahangir, Nur-Jehan wearing beautiful robes, headgear, and ornament which rose in her hand. This stamp is spearheading all stamps in fashion on stamps in the whole fashion through the age’s series. 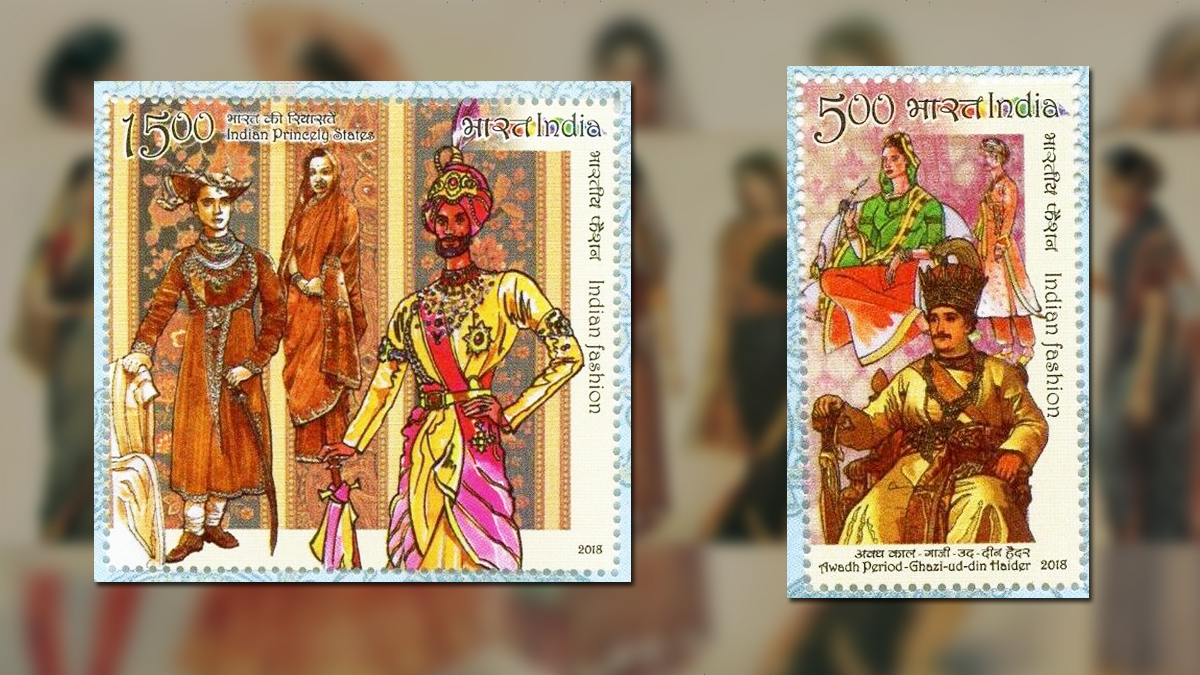 After the Mauryan, there were many dynasties that ruled India but there were one Kushans who bought the concept of stitched cloth in India. Till the Mughal period came India saw a vast changs in its cultural and clothing style. It was the most flourishing period for the trade due to which the influence of the Middle East came to India. Indians saw the rise and fall of many power every dynasty bought some different from them. Till the 18th century came India was under British rule but still the rise of fashion was its highest as the royalties of the Princely States indulged themselves in the stigma called fashion.

Historically the most important place in terms of fashion in Indian culture is Awadh. For centuries, the Awadhi style of dressing has intrigued fashion enthusiasts. Its fabric, embroideries, and precision in design, influence connoisseurs of fashion and style enthusiasts alike.

The Nawabs were predominant in the 18th and 19th centuries especially due to the evolution of fashion. The Lucknow aristocracy spent lavishly on their dresses and how they are worn. They had an impact on the dressing style of the country and textile.

India Post issued a stamp of the Awadh period cloth; it illustrated the famous Ghaziuddin Haider making these stamp phenomenal assets in the series of fashion on stamps.

Next were the royalties of the Indian princely state, they display the evolution of fashion through the fusion of local traditional dress with the trend from other parts of the country. The aristocratic Rajput men court dresses included ‘angarkhi’, ‘pagdi’,’churidar pajama’, and a belt. The special thing was Dhoti, it was worn differently across the different princely states. This period also saw the fusion of the diverse Indian attire with the trends of European attires.

India Post illustrated different attires of various Princely States. The attires of the Sikh royalty during the British Raj to Maratha royal families are seen on this stamp. These stamps give a vivid aspect of Indian fashion during the late 18th to early 19th century making a key collectible for series fashion on stamps.

In Indian clothing changes from region to region, it has so many variants that a particular region may have different forms of wearing a headgear. The style of Dhotri of wearing an Angarakha is also different. The way of wearing sari also defines the cast and social status of women. The ornaments also play a vital role in this. India Post has issued various stamps marking this beautiful and different Indian fashion changing from eons. These stamps are first in the series only brushing through an aspect is India changing fashion