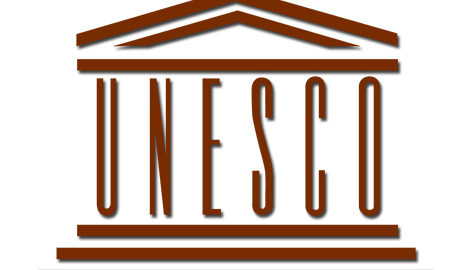 India is home to several UNESCO World Heritage Sites; ranging from natural wonders to architectural marvels. While some are keepers of the magnificence of history, others are a safe and lush haven for biodiversity to flourish. These majestic UNESCO World Heritage Sites in India featured on stamps which were issued on 16 March 2020. These sites have received the prestigious status because of their natural and scientific significance.

This is the second in a series and concentrates on natural sites and depicts wildlife found in those sites. They feature Nanda Devi and Valley of Flowers National Parks, Western Ghats, Manas Wildlife Sanctuary, Great Himalayan National Park on the stamps denominated wither Rs.5, or Rs. 12.

The Nanda Devi and Valley of Flowers National Parks are one of the most spectacular wilderness areas located in India’s Uttarakhand province in the western Himalayas. 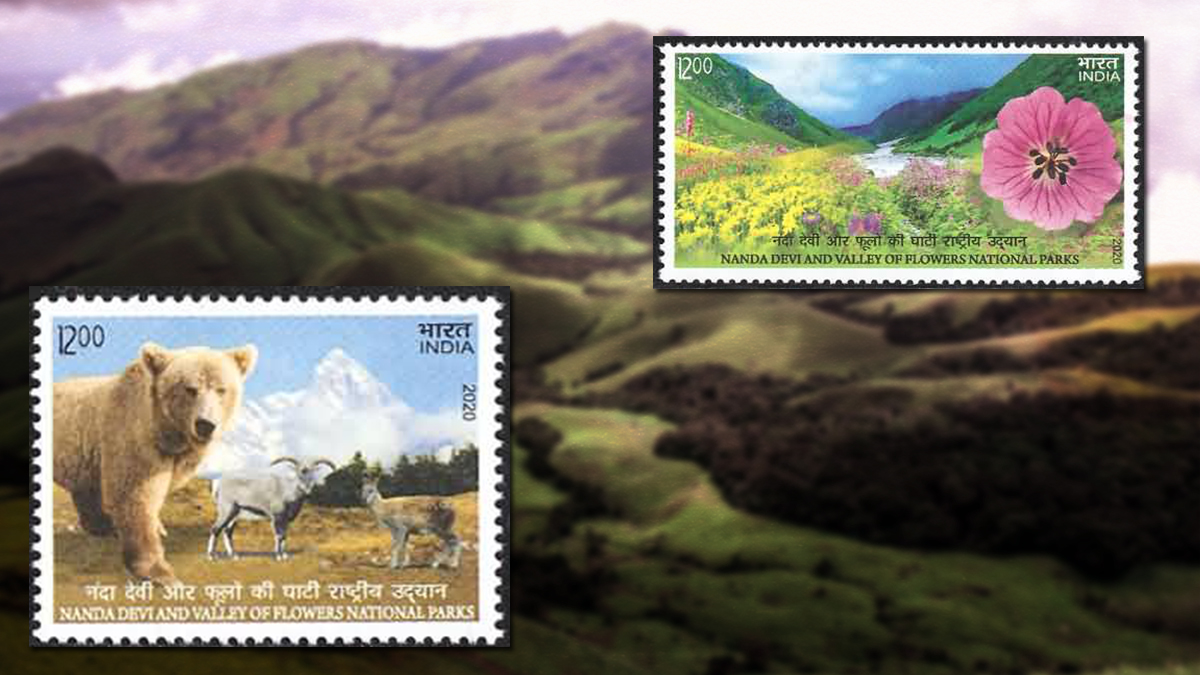 It is renowned for its meadows of endemic alpine flowers and outstanding natural beauty. This richly diverse area is also home to rare and endangered animals, including the Asiatic black bear, snow leopard, brown bear, and blue sheep. This gentle landscape complements Flowers National Park and the rugged mountain wilderness of Nanda Devi National Park. Together they encompass a unique transition zone between the mountain ranges of the Zanskar and Great Himalaya, praised by mountaineers and botanists for over a century and in Hindu mythology for much longer. 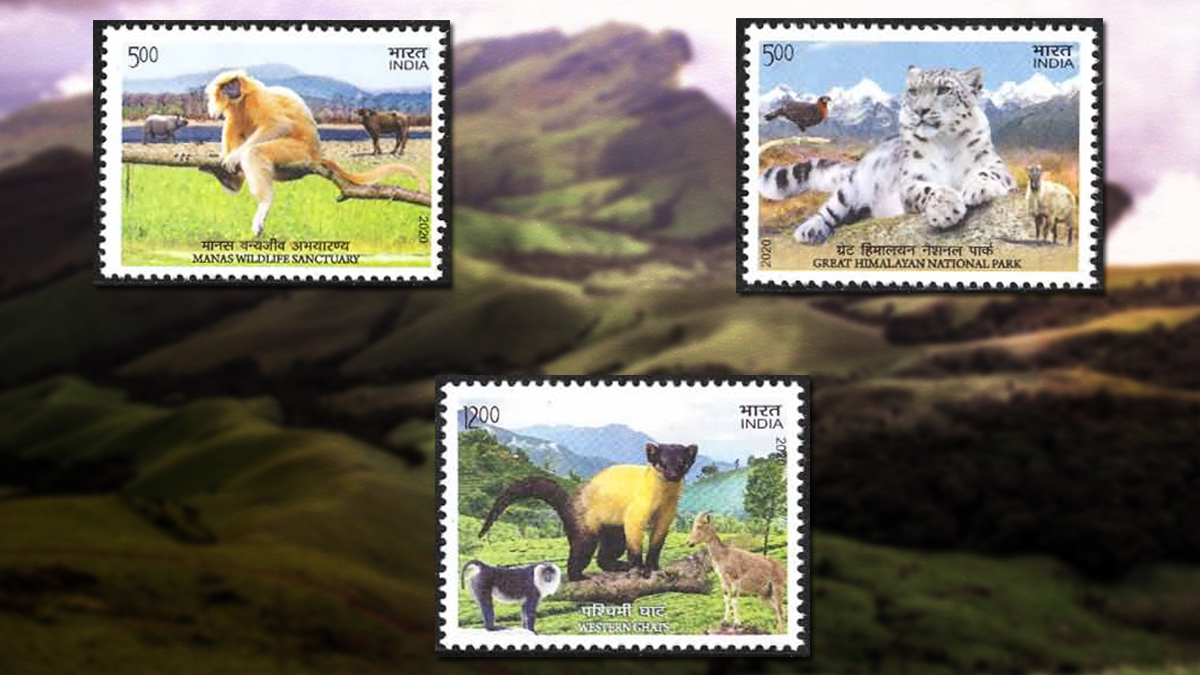 Assam is one of the 8th North-Eastern states of India known for rich wildlife sanctuary and abundance of natural settings. These vast jungles of the state are the abode of some of the beautiful flora and fauna. Moreover, Assam is home to two important and world-famous UNESCO World Heritage Sites – Manas National Park and the most popular Kaziranga National Park.

Manas takes its name from the Goddess Manasa. The site is noted for its spectacular scenery, with a variety of habitat types that support a diverse fauna, making it the richest of all Indian wildlife areas. Manas is the first reserve included in the network of tiger reserve under Project tiger in 1973.

Its wetlands are of international importance This park is famous for its rare and endangered endemic wildlife such as the Assam Roofed Turtle, Hispid Hare, Golden Langur, and Pygmy Hog. Manas is famous for its population of the Wild water buffalo. The Manas Wildlife Sanctuary was tagged as World Heritage Site in 1985.

The Himalayas have been a source of awe and inspiration for millennia to countless individuals. The Unesco World Heritage Site Committee granted the status to the park under the criteria of “outstanding significance for biodiversity conservation”.

A trek of 35 to 45 km in any of the park’s valleys brings one into the high altitude habitat (3,500 m and above) of animals such as blue sheep, snow leopard, Himalayan brown bear, Himalayan tahr, and musk deer. Best sightings can be made in autumn (September–November) as animals start their seasonal migration to lower altitudes.

The Western Ghats, a mountainous range running parallel to the west coast of peninsular India, has a rich and intriguing history. The Western Ghats is well known for its majestic beauty.

The range starts near the Songadh town of Gujarat, south of the Tapti River, and runs through the states of Maharashtra, Goa, Karnataka, Kerala, and Tamil Nadu ending at Marunthuvazh Malai, at Swamithope near the southern tip of India in Tamil Nadu. Being one of the eight hottest hotspots of biological diversity in the world, the Western Ghats is home to more than 5000 species of flowering plants, 139 mammal species, 508 bird species, and 179 amphibian species.

India is a country brimming with some of the most amazing natural sites that are recognized by UNESCO. We have collated a list of all four UNESCO World Heritage Sites in India featured on stamps. As you explore India, don’t forget to see these spectacular sites in the country. These sites worldwide are given this status because they have a cultural, historic, scientific significance about them.

Please wait for our next Blog to know more about other charming Indian Heritage Sites.