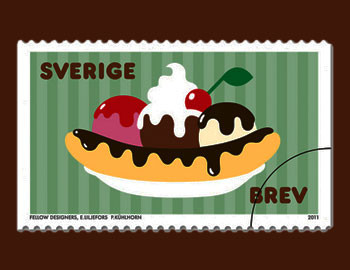 Ice cream is an amazing after meal treat. It is a common thread between people of all age group. Kids and adults like these cold desserts alike.  Many of us have happy childhood memories linked to ice cream. In vacations, loitering outside in hot summers enjoying the cold melting Ice cream gets all of us nostalgic about our childhood. Even as a grown up, Ice cream is an ultimate comfort food. Many countries have acknowledged this delicious food and issued stamps of it. The Postal Service of many countries all over the world celebrates Ice Cream on stamps! — a cold, sweet treats beloved by people of all ages. 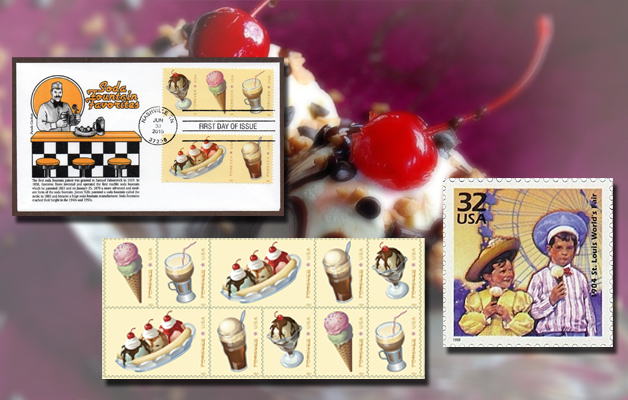 This booklet issue was with the aim of taking everyone down the memory lane while posting or receiving letters. 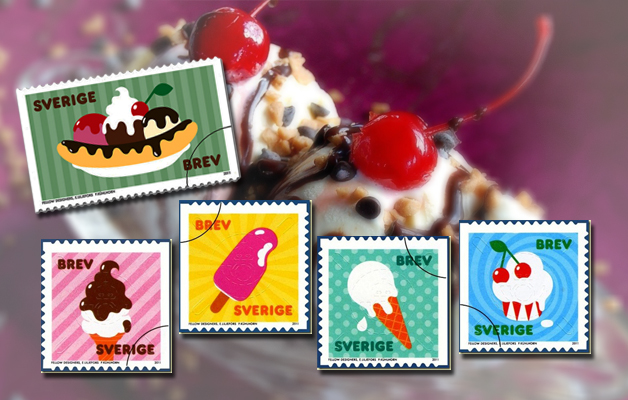 Sweden is not far behind to issue ice cream on stamps. Swedes are an ice cream-loving people. It ranks second in Europe for consumption of ice cream. On May 12, 2011, Sweden’s postal services issued a set of five scrumptious stamps for use on summer greetings.

The stamps are issued in a booklet of five self-adhesive stamps which includes a set of four stamps showing an ice cream bar, a dripping ice cream cone, a sundae, and a cone dipped in chocolate. And the fifth, a banana split pictured on the coil stamp, which has moisture-activated gum. 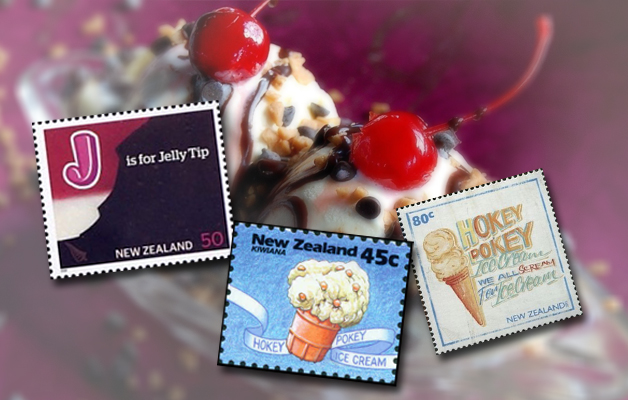 New Zealanders are also known for their love for ice cream. It was New Zealand where the beloved Hokey Pokey flavor was invented. Hokey pokey is the flavor of ice cream, consisting of plain vanilla ice cream with small, solid lumps of honeycomb toffee.

Hokey pokey cone made an appearance on the coil and booklet stamps issued March 23, 2011. The stamp designed had a cone on a background of blue sky. The denomination of these stamps is 45 cents and inscribed with “Hokey Pokey Ice-cream”. They are intended for domestic use only.

Their love for this frozen dessert is reflected by their issues of ice cream on stamps that not only picture ice cream but also celebrate it as part of the national heritage, or Kiwiana.

New Zealand issued a sheet of 26 stamps of 50 cents called “The A to Z of New Zealand.” These stamps represent an item of the country’s culture, history, and heritage of each letter from the New Zealand Post.

The letter J stamp in the sheet shows a chocolate-covered ice cream bar. This stamp is inscribed “J is for Jelly Tip”.

The delicious hokey pokey flavor found distinctively in New Zealand is nothing quite like elsewhere. The latest 80 cent ice cream stamp from New Zealand has a chant of “We all scream for Ice Cream” as a part of the Kiwi Kitchen sheet issued on July 1, 2015. 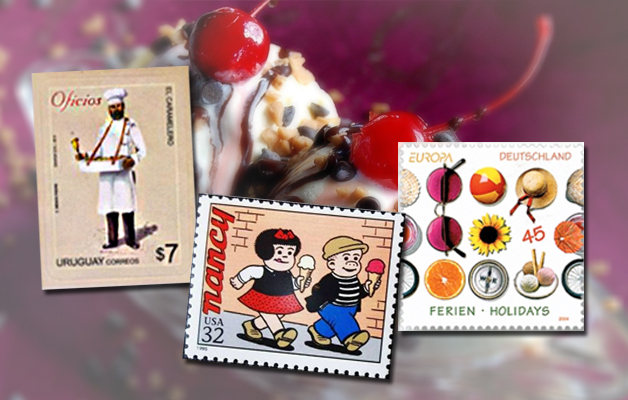 Historic pushcarts are shown on stamps from numerous posts. Ice cream is always related to summer holidays, and all the fun it holds. Handful stamps are issued of Ice cream vendor as well.

Uruguay issued a $ 7 stamp as a part of a series showing traditional occupations of Uruguay. The stamp has an ice cream vendor and is inscribed with “El Heladero,” Spanish for “ice cream man.”

An ultimate holiday fantasy stamp shows a dish of ice cream (one scoop each of chocolate, vanilla, and strawberry) is summertime illustrated on Germany’s 2004 Europa stamp with the theme of vacations.

Finland also has included a delicious ice cream cone stamp in its Summer Feelings set of May 8, 2015. The design shows a close-up of a woman eating a strawberry ice cream cone, which is slowly melting in the summer sun. A melting ice cream cone also is pictured on the first-day cancel.

Nordic cuisine stamps issued by Aland Island Post includes pictures of a dessert prepared by local chef Michael Bjorklund, combining chocolate and berries and topped with a scoop of vanilla ice cream. Taste also is emphasized on the most recent issues of ice cream on stamps by Aland a few months ago on March 18.

France issues special stamps each year for use on vacation mail in 2014. Vacation stamps were issued featuring cartoon animals engaging in a variety of summertime experiences, including a dog licking an ice cream bar on the beach. British, French and German stamps issues on ice cream; connect ice cream with summer vacations.

The € 0.60 stamp showing a man selling gelato is part of a Made in Italy series. An ice cream vendor is shown with his cart and a three-scoop ice cream with a waffle cone. 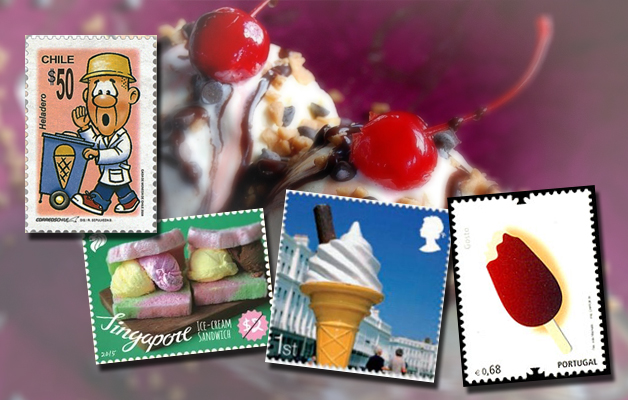 Chile issues stamp featuring an ice cream vendor in its Occupation series, this 50-peso stamp was issued in 2008. There are a number of Ice cream vendor stamps issued by different countries, which raises selling ice cream as an important occupation.

A giant soft-serve ice cream cone sculpture is shown on the first-class stamp in Great Britain. The stamp was issued on May 15, 2007. The cone has a chocolate candy bar stuck in it. A seaside resort is shown in the background of this photograph.

The Portuguese stamp issued on Oct. 2, 2009, in a set of representing the five senses. The Taste stamp shows an ice cream bar with a bite out of it, and to add to the sensation, the stamp was printed on vanilla-flavored gum.

So what are you thinking now after reading so much about ice cream?

Go out grab one ice cream, write a letter and enjoy your day!

View all posts by Team Mintage World →
One thought on “Forever Frozen: Ice Cream on stamps”