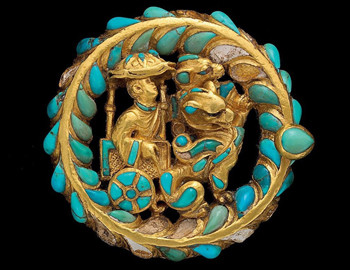 Let us learn the history of Afghanistan through the study of Afghan coins today. Be it Alexander the Great, Scythian tribes, Huns, Turks, Genghis Khan, Timur, Mughals, Persians, Arabs, British, or the Soviets, This land has seen it all. Officially known as the Islamic State of Afghanistan or just Afghanistan commonly, its name translates to the ‘Land of Afghans’.

Because of its strategic position astride the ancient land route to India, Afghanistan (formerly known as Aryana and Khorasan) was invaded several times throughout history. This mountainous region was a powerful empire under the Kushans, Hephthalites, Ghaznavids and Ghoris. For a short period, it acted as the easternmost frontier of the Iranian world with strong cultural influences from the Turks and Mongols to the north, and Indians to the south.

In 1747, Ahmad Shah Durrani united the Pashtun tribes and shaped the Durrani Empire. In the late 19th century, Afghanistan became a buffer state between British Indian Empire and the Russian Empire. In 1919, after the third Anglo-Afghan war, the country regained its full independence from the United Kingdom. Between the 1930s and 70s, Afghanistan witnessed the spirit of a national government. A brief venture into democracy ended in a 1973 coup and a 1978 Communist counter-coup. The Soviet Union invaded in 1979 to support the frail Afghan Communist regime, sparking a long and destructive war. The USSR withdrew in 1989 under relentless pressure from internationally supported anti-Communist mujahedin rebels. After a subsequent series of civil wars, Kabul fell in 1966 to the Taliban, a group that emerged in 1994 to end the country’s civil war and anarchy. In 2001, a new constitution was adopted and Hamid Karzai became the first democratically elected president who was in power for two continuous terms.  Ashraf Ghani Ahmadzai and Abdullah Abdullah were elected in 2014 in a power-sharing agreement. Start collecting Afghan coins right away to enjoy learning about the history of Afghanistan!

Afghanistan’s traditional coinage shared many similarities with that of its neighbours like Iran and India. There were four major mints: Kabul, Kandahar, Balkh and Herat. The early Durranis also controlled mints in Iran and India. On gold and silver Afghan coins, the inscriptions in Persian (called Dari in Afghanistan) included the name of the mint city and ruler, but some issues are anonymous. The arrangement of the inscriptions such as the name of the ruler was different at each mint. Copper coins were controlled locally and usually did not name any ruler. For these reasons, the coinage of each mint is treated separately by numismatists. The relative values of gold, silver, and copper coins were not fixed but were determined in the marketplace.

In 1891, Abdur Rahman had a modern mint set up in Kabul using British minting machinery with the help of British advisors. The other mints were closed down except for the issue of local coppers. The new system in which 60 paise equalled 1 rupee was put into force. In 1901, the name Afghanistan appeared on coins for the first time. A decimal system, 100 puls to 1 Afghani was introduced in 1925. The national symbol on most Afghan coins is a stylized mosque within which is seen the mihrab, a niche indicating the direction of Mecca, and the minbar, the pulpit, with a flight of steps leading up to it. Inscriptions in Pashtu were first used under Habibullah, but did not become standard until 1950. Until 1919, coins were dated by the lunar Islamic Hejira calendar (AH), often with the king’s regnal year as a second date.

Afghan copper coins were not regulated by the central authorities. Mint masters introduced many types of hand-struck coinage including the use of old Afghanistan coins as blanks. Consequently, weights are quite random and there are no denominations in the true sense of the term. All were known as falus or paisas, and lots of mixed sizes were accounted by weight. Every few years, sometimes every year, coppers were recalled and re-coined, at a fee often substantial which was paid to the mint master that formed his salary. This accounts for a large number of over-struck pieces which are generally less desirable than clear single struck specimens. Named hammered coins did exist but belonged to the earlier period. Unlike the anonymous afghan coins, these coins bore the name or characteristic type of the ruler.

Afghanistan is a land of beauty and conflict. A resurgent Taliban and incessant provincial instability is still a serious challenge for the government in Afghanistan. Presently, about a fifth of the total population lives in exile as refugees, mostly in Pakistan. Politically weak, Coins of Afghanistan portray a completely different story. Its glorious past and rich culture are evidently reflected on its currency showing its bright side. Wouldn’t the world be a better place if we all see the bright side of things?

Watch the space for an exciting series of Blog posts that will shed some light on world coins, one by one!