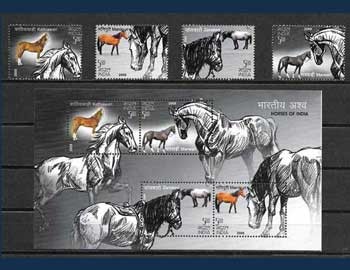 The sight of horses galloping away to glory sometimes seems to be enigmatic on one hand and can also induce sparks of energy within you, on the other.  These beautiful creations are in a way, a symbol of elegance, beauty, triumph and strength; a rare combination you would witness! Over many centuries, horses have been used for various purposes and have been featured on different scriptures and ancient artifacts. Today, we take a look at a set of four Indian stamps that were released depicting four horses which have an Indian origin! 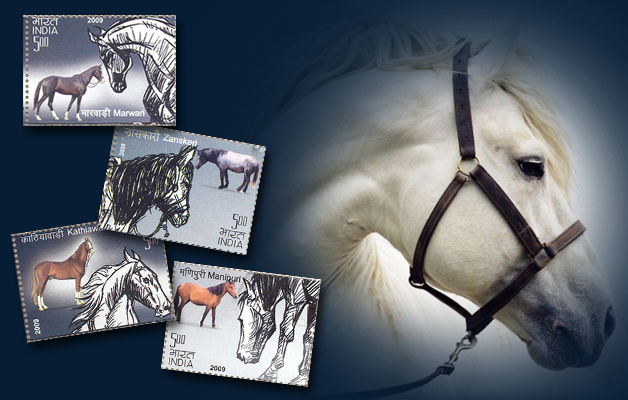 The Marwari horses are native to Jodhpur and are known for its inward-turning ear tips. They are found in different colours, but the ones with pinto patterns are more popular. They are similar to the Kathiawari horses and are strong with a natural relaxed gait. Native Indian ponies are cross bred with Arabian horses and sometimes have a Mongolian influence as well. The Rathores from Marwar started strictly breeding the Marwari in the 12th century and used them as cavalry horses. Today, they are also used for light draught and agricultural work, riding and packing. The exportation of Marwaris was banned for many years but the rule was slowly relaxed from 2000. White horses are bred only for religious purposes in India. Gray horses are considered auspicious where as Black ones are considered to be unlucky. Horses with long whorls down the neck are called devman, while horses with whorls below their eyes are called anusudhal and are unpopular. The breed probably originated in northwest India on the Afghanistan border, as well as in Uzbekistan, Kazakhstan, and Turkmenistan.

In the 12th Century, they were only allowed to be ridden by members of the Rajput families and the Kshatriyas warrior caste. In the 16th century, Mughals brought Turkoman horses that were used for breeding Marwari. The Rajputs of Marwar, under Akbar, formed a 50,000 strong cavalry force in the 16th Century, using Marwari horses. It is believed that these loyal horses leave the battle field only upon victory, death, or for carrying a wounded master. The horses were trained for complex riding manoeuvres. The British horsemen preferred Thoroughbreds and polo ponies over Marwari and Kathiawari horses, leading to mismanaged breeding. After Indian independence many animals were killed. This trend continued in 1950, which almost led to the breed’s extinction. Maharaja Umaid Singhji tried his best to revive the breed in the 20th century which saved the Marwari. The Marwari is today generally used for show, horse safaris, sport, ceremonial & religious purposes. The Indian military rarely uses these horses. Natchni horses from the Marwari breed are decorated in silver, jewels, and bells. They are trained to perform interesting prancing and leaping movements at many Indian ceremonies. Click here to take a look at one of the four Indian stamps that belonged to a special set dedicated to Indian horses.

The Manipuri pony is an ancient breed from either the Tibetan pony or a cross-breed between Mongolian Wild Horses and Arabian horses. They were used as cavalry horses throughout the 17th and 18th centuries. The British used them as polo ponies. Today, their numbers have reduced drastically. These days, they are used for playing polo, racing and for military transport. The Manipuri breed is known for its light head and strong neck. They are mostly bay in colour and are shorter than other breeds of horses found in India.  They were ridden by Meitei warriors and were a part of the cavalry commanded by Garib Newaz, who terrorized upper Burma in 1700s. In 1738, they were used during his Sack of Sagaing. Between 1859 and 1916, they were used by the British for playing polo. British cross-bred the ponies with Arabian horses to upgrade their polo ponies. The demand for Manipuris was so high that the export of ponies was banned at one point in time. They were also used in World War II to transport British troops into Burma. Recently, many ponies are being smuggled from Myanmar where the breed is in demand. Manipur Horse Riding and Polo Association started promoting them to tourists in 2005 to prevent their extinction. Polo was introduced in Manipur in the seventh century. They were also used to play sagol kangjei, a sport which is believed that the modern day polo was inspired from. If you are a topical collector who loves Indian stamps, then you should have this set in your collection!

Kathiawari horses come from the Kathiawar peninsula in western India. They were earlier used as a desert war horse. They can work or walk through rough terrain with very little food. They are closely related to the Marwari horses of Rajasthan; both of which have Arab influences. They are found in all colours but not black. Their numbers are decreasing day by day. Today, they are used for riding, in harness and for sports as a police horse and for the sport of tent-pegging. Initially, there were some native horses in this part of the country. Later Arab horses were imported to India and cross-bred with these native horses, leading to the origin of Kathiawari breed. They were also influenced by the Mongolian horse. 28 of these lines still exist. These wiry and sleek horses were used in war and are known for their loyalty and bravery in battle. They can be easily identified by their extremely inwardly curved ears, which sometimes overlap each other.  They are similar to Marwari horses but are not as tall. They were also used by Maratha cavalry, and later till the end of First World War – by the Indian Army. These beautiful horses definitely deserve to be featured on Indian stamps.

Zanskari horses are small mountain horses or ponies from Ladakh. Its name comes from the Zanskar valley in Kargil district. It is strong, sure-footed and has a great stamina to work at high altitudes like 3000 and 5000 m above sea level, and temperatures at -40 °C. It has some characteristics of Tibetan breeds. They are also close to the Spiti breed from Himachal Pradesh. They are generally grey in colour and are medium in size. They also sometimes occur in bay, brown, black and chestnut colours. Only a few hundred remain alive and hence are considered to be endangered. This is because of the indiscriminate cross-breeding with other horses. Conservation efforts are being taken by India to save this breed. The Indian army in Ladakh uses it as a pack-beast. It is also used for riding and for polo. Start looking for this lovely set of Indian Stamps that features Zanskari Horses.

So now that you have read about these Indian horses, start completing this set of four Indian stamps right away!