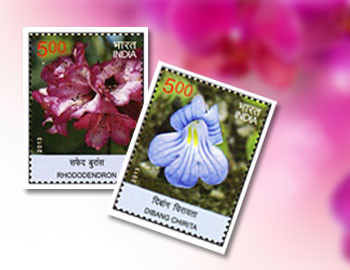 Continuing from where we left last time, let’s take a look at some more Himalayan flowers that were depicted on a set of 12 Indian stamps that were released on 3rd September 2013. 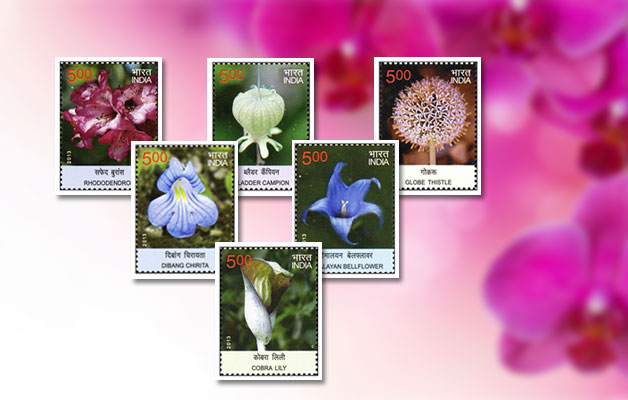 Like they say, nothing is black and white; there’s a grey side to each one of us. Though Globe thistles are known for their beautiful shape and vibrant purple hues, these prickly flowers can sting you badly sometimes!  In fact, the name itself means hedgehog in Greek. They belong to the Aster family and bloom from early summer, lasting up to 8 weeks. These low-maintenance perennial flowers can last for a long time and hence would be a good addition to any garden. Flowers can bloom up to 2 inches big across on 3 to 4 feet stems. The leaves are dark green on top and silver and a bit hairy underneath. They are majorly found in Asia and Europe. They can be used for an everlasting flower display. Globe thistle echinops consists of more than 120 species, out of which only a few are cultivated.

Himalayan Iris is a pale bluish-lavender to deep reddish purple flower. They have reddish purple veins and a yellow wavy central crest. Standards are bent outwards and downwards. Filaments are light violet tinged, anthers are cream coloured. The ovary is 3-sided and each side is concave. Styles are broadly lobed, pale-violet in colour with toothed edges. They flower from Pakistan to North East India, W China, 800-4000 m above sea level. It is a magnificent beauty that’s India’s pride!

Himalayan Bell flower is almost like a primrose which flowers between June and August. The only difference is that these beauties have bell-shaped flowers. The drooping flowers are rosy-purple in colour with long flower stalks. 1.5 cm long flowers are divided into 5 oblong blunt petals. It has 5 triangular sepals. The leaves are long-stalked, hairy, with a rounded-heart-shaped blade and 5 to 7 toothed lobes. They are found majorly in Soviet Central Asia, Afghanistan and North West Himalaya. It is found at heights of 2286-4200 m above sea level. One wouldn’t mind climbing the Himalayas just to catch a glimpse of these amazing flowers!

You will experience an erky feeling when you look at the Cobra lily due to its strange appearance. This pitcher plant also feeds on insects and sometimes small vertebrates. These plans flower infrequently and spread asexually through runners and stolens. The modified leaves come from the base and end in hooded foliage. The hooded leaves are used gather digested insects for nutrients. The hood secretes a scent to attract its prey. They prey finds it difficult to come out once it is trapped inside. Digestive enzymes are secreted by the plant to break down the animal matter. Other pitcher plants collect rain water to drown their prey but the hoods of Cobra lily are not open.

Bladder Campions are white coloured drooping flowers known for its unique large inflated calyx. These branching perennial flowers grow on plants that are 1 meter tall. Two out of the five petals are lobed and deeply divided. A pale barrel-shaped calyx with yellow-brown to brown-purple veins appears on the back of the flower. Apart from the Himalayas, these flowers are also found majorly in Britain and Ireland. The leaves of Bladder Campion can be used in salads and many other dishes. Roots can be used as soap for washing clothes, hair etc. The female flowers of Red Campion secrete a frothy foam that captures pollen from insects that come to gather nectar.

“Rodon” means “rose” and “dendron” means “tree” in Greek. Rhododendron flowers are known as the King of Shrubs since they are the best flowering evergreen plants in mild temperatures. It is the national flower of Nepal, and the state flower of Sikkim in India. They bloom in different colours like white, pink, red, or purple. Flemish botanist, Charles l’Ecluse discovered the flower in the 16th century. It was introduced to Britain in 1656 from the European Alps, which is why they are also known as Alpine Rose for Rhododendron histrum.  Consuming leaves of this tree can cause stomach irritation, abdominal pain, abnormal heart rate and rhythm, convulsions, coma, death. Honey made from the nectar of Rhododendron flowers is also poisonous.

If you love collecting stamps and are looking for a new theme to follow, then go ahead, try finding these lovely Indian stamps featuring flowers.