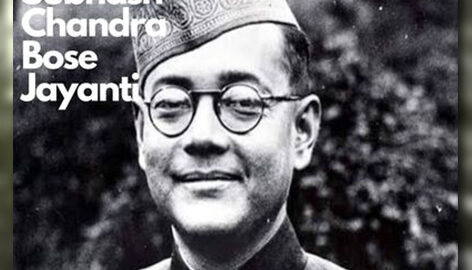 The year 2021 marks the 125th Birth Anniversary of Netaji Subhash Chandra Bose who was born on 23rd January 1897 in Cuttack to Prabhavatti Dutt Bose and Janakinath Bose. He was 9th kid to his parents and had 13 siblings. He took his formal education from Protestant European School in Cuttack and later shifted to the Ravenshaw Collegiate School. He secured the second position in the matriculation examination in 1913. Then, he was admitted to the Presidency College. At the age of 16, he was influenced by the teachings of Swami Vivekananda and Ramakrishna. At that time, he felt that his religion was more important than his studies. On the 125th Birth Anniversary of Netaji, let’s get acquainted with his life story.

Netaji Subhash Chandra Bose hated British offensive remarks to the Indians in public places and insulted them openly. He assaulted Professor Oaten for manhandling Indian students and so he was expelled from the college. He later joined the Scottish Church College at the University of Calcutta and passed his B.A. in philosophy in 1918. He went to Europe to prepare and appear for the Indian Civil Services exams for which his father had made available Rs 10,000. He came fourth in the ICS examination and was selected, but he did not want to work under an alien government which would mean serving the British. And so he resigned from civil service job on 23rd April 1921 and returned to India. He wrote to his elder brother, Sarat Chandra, “Only on the soil of sacrifice and suffering can we raise our national edifice.”

His mentor was Chittaranjan Das who was a spokesman for aggressive nationalism. He began Swaraj newspaper and took charge of publicity for the Bengal Provincial Congress Committee. He was elected the President of All India Youth Congress and also the Secretary of Bengal State Congress in 1923. He was also the editor of the newspaper “Forward”, founded by Chittaranjan Das. He also worked as the CEO of the Calcutta Municipal Corporation. Due to his nationalist activities, he was sent to Mandalay prison where he got infected with tuberculosis. After his release, he became general secretary of the Congress party. He organized the Annual Meeting of the Indian National Congress at Calcutta in December 1928. His most remarkable role in organizing was as General Officer Commanding (GOC) Congress Volunteer Corps.

Image 1: The Indian postal paid tribute to Netaji by issuing 2 special stamps on his 67th birth anniversary of 55 paise and 15 paise respectively. The 2 Rupees commemorative coin was issued on the birth centenary of Subhas Chandra Bose.

Nirad Chaudhuri wrote about this meeting, “Bose organized a volunteer corps in uniform, its officers were even provided with steel-cut epaulettes … his uniform was made by a firm of British tailors in Calcutta, Harman’s. A telegram addressed to him as GOC was delivered to the British General in Fort William and was the subject of a good deal of malicious gossip in the (British Indian) press. Mahatma Gandhi as a sincere pacifist vowed to non-violence, did not like the strutting, clicking of boots, and saluting, and he afterwards described the Calcutta session of the Congress as a Bertram Mills circus, which caused a great deal of indignation among the Bengalis”.

Once again, he was imprisoned for actively participating in civil disobedience. This led to becoming Mayor of Calcutta in 1930.

He said from Congress platform that INC should be organized on the broadest anti-imperialist front with the two-fold objective of winning political freedom and the establishment of a socialist regime in 1938. Till then, he became popular at the national level and agreed to accept nomination as Congress President. He stood against unqualified Swaraj demand. This led to a confrontation with Mohandas Gandhi. This led to split in INC. The rift also divided Bose and Nehru. He appeared at the 1939 Congress meeting on a stretcher. He was elected president again over Gandhi’s preferred candidate Pattabhi Sitaramayya. Due to the ideological differences, he was forced to resign from the Congress presidency. Hence, he organized the All India Forward Block on 22nd June 1939.

All India Forward Block was formed by Subhash Chandra Bose on 3rd May 1939 after resigning from the presidency of the Indian National Congress on 29 April after being outmanoeuvred by Gandhi. He asked people that while signing the pledge form, one should sign it with their blood. Firstly, seventeen young girls came up and signed the pledge form. He became the president of the Forward Bloc and S.S. Kavishar its vice-president. A Forward Bloc Conference was held in Bombay where the constitution and programme of the Forward Bloc were approved. In the same year, he began publishing a newspaper called Forward Bloc.

When he visited Madurai on 6 September, U Muthuramalingam Thevar who was a staunch supporter of Bose organized a massive rally as his reception. His writing reveals that he was deeply impressed by their methodical and systematic approach and their steadfastly disciplinarian outlook towards life. He went to England for exchanging ideas about India’s future with British Labour Party leaders and political thinkers like Lord Halifax, George Lansbury, Clement Attlee, Arthur Greenwood, Harold Laski, J.B.S. Haldane, Ivor Jennings, G.D.H. Cole, Gilbert Murray and Sir Stafford Cripps.

He escaped to Germany, via Afghanistan and the Soviet Union. He dressed like Pathan and grew a beard to avoid being identified. He escaped from under British surveillance from his Elgin Road house in Calcutta on the night of 17 January 1941, accompanied by his nephew Sisir Kumar Bose, later reached Gomoh Railway Station.

He founded the Free India Center in Berlin and created the Indian Legion out of Indian prisoners of war. Its members swore, “I swear by God this holy oath that I will obey the leader of the German race and state, Adolf Hitler, as the commander of the German armed forces in the fight for India, whose leader is Subhas Chandra Bose”. Soon he suspected that Hitler was more interested in using his men to win propaganda victories than military ones. So, in February 1943, Bose boarded to Japan.

Bose travelled in the German submarine U-180 around the Cape of Good Hope to the southeast of Madagascar and shifted to I-29 for Japan. He first met Pritam Singh Dhillon, the president of the Bangkok chapter of the Indian Independence League.

The Indian National Army was formed by Indian nationalists and Imperial Japan in 1942 in Southeast Asia during the Second World War. Its main and clear objective was to secure Indian independence from British rule. Firstly, it was formed under Mohan Singh in 1942. However, it got collapsed and was disbanded in December. Later, Ras Bihari Bose handed over INA to Subhash Chandra Bose. Under his leadership, the INA drew ex-prisoners and thousands of civilian volunteers from the Indian population of Burma. INA had a separate women’s unit, the Rani of Jhansi Regiment headed by Captain Lakshmi Swaminathan which is first of its kind in Asia.

The most famous quote, “Give me blood, and I shall give you freedom!” was urged in an Indian National Army rally of Indians in Burma on 4 July 1944.

He devoted his whole life for independence for India unconditionally. He didn’t believe that Gandhi’s non-violence would never be sufficient to secure India’s independence. He re-organized and led the Azad Hind Fauz formed with Indian war prisoners and plantation workers of Malaya, Singapore, and other parts of Southeast Asia. He deeply disapproves the practice of racism and annulment of democratic institutions in Nazi Germany. He observed party organization and saw communism and fascism in action.

Subhash Chandra Bose was featured on the stamps in India from 1964, 1993, 1997, 2001, 2016 and 2018. The international airport of Calcutta is named after him. He is not just a respected name in India but also in Japan. To commemorate the 125th Birth Anniversary of Netaji, India Post issued a Rs. 25 stamp which depicts Netaji and his Army.

Netaji Subhash Chandra Bose fought to free India from the shackles of British imperialism and organized the Azad Hind Government from outside the country on October 21, 1943. Netaji set up the Provisional Government of Independent India (Azad Hind) and transferred it’s headquartered at Rangoon on January 7, 1944. On the 5th April 1944, the “Azad Hind Bank” was inaugurated at Rangoon. It was on this occasion that Netaji used this chair for the first time. Later the chair was kept at the residence of Netaji at 51, University Avenue, Rangoon, where the office of the Azad Hind Government was also housed. Afterwards, at the time of leaving Burma, the Britishers handed over the chair to the family of Mr A.T. Ahuja, the well-known business-man of Rangoon. The chair was officially handed over to the Government of India in January 1979. It was brought to Calcutta on the 17th of July, 1980. It has now been ceremonially installed at the Red Fort on July 7, 1981.”