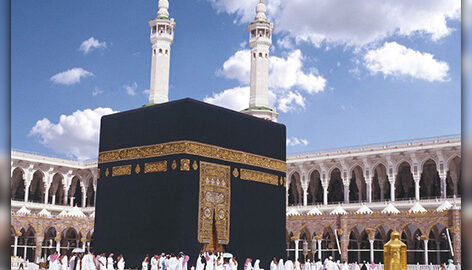 Mosques are more than places of worship — they are community gathering spaces that take a variety of forms depending on their cultural and environmental context. Since the foundation of Islam in the seventh century CE, the architecture of mosques has reflected the various roles they have played in Muslim society, including educational, civic, ceremonial, celebratory, and social purposes, in addition to their primary function as a place for prayer. In this second series of Mosques Featured on Banknotes, we will explore the beautiful history of breathtaking Mosques around the world.

Banknotes around the world feature many of the marvellous wonders to showcase their pride of culture and advanced science behind the monuments. Here is a list of four Beautiful Mosques Featured on Banknotes. Their mesmerizing mosaics and historical impacts will leave you stunned.

The Mosque of Ibn Tulun is located in Cairo, Egypt. It is the oldest mosque in Egypt as well as the whole of Africa surviving in its full original form and is the largest mosque in Cairo in terms of land area. It was built in 878–880 under the supervision of the Mesopotamian Christian architect Ibn Katib al-Farghani

Since Ibn Tulun Mosque has much open space, it boasts both sunlight and shadows. It is built around an open square courtyard which allows natural light to travel through. Ibn Tulun Mosque features Samarra style – its decorations being created from carved stucco and wood.

The mosque was commissioned by Ahmad Ibn Tulun, the Abbassid governor of Egypt from 868–884 whose rule was characterized by de facto independence. The mosque is constructed around a courtyard, with one covered hall on each of the four sides, the largest being on the side of the qibla, or direction to Mecca. The original mosque had its ablution fountain (sabil) in the area between the inner and outer walls. A distinctive sabil with a high drum dome was added in the central courtyard at the end of the thirteenth century by the Sultan Lajin.

The Ibn Tulun mosque, which is famed for its architecture and unique minaret featured on the 5 Egyptian Pound banknote issued 1970. 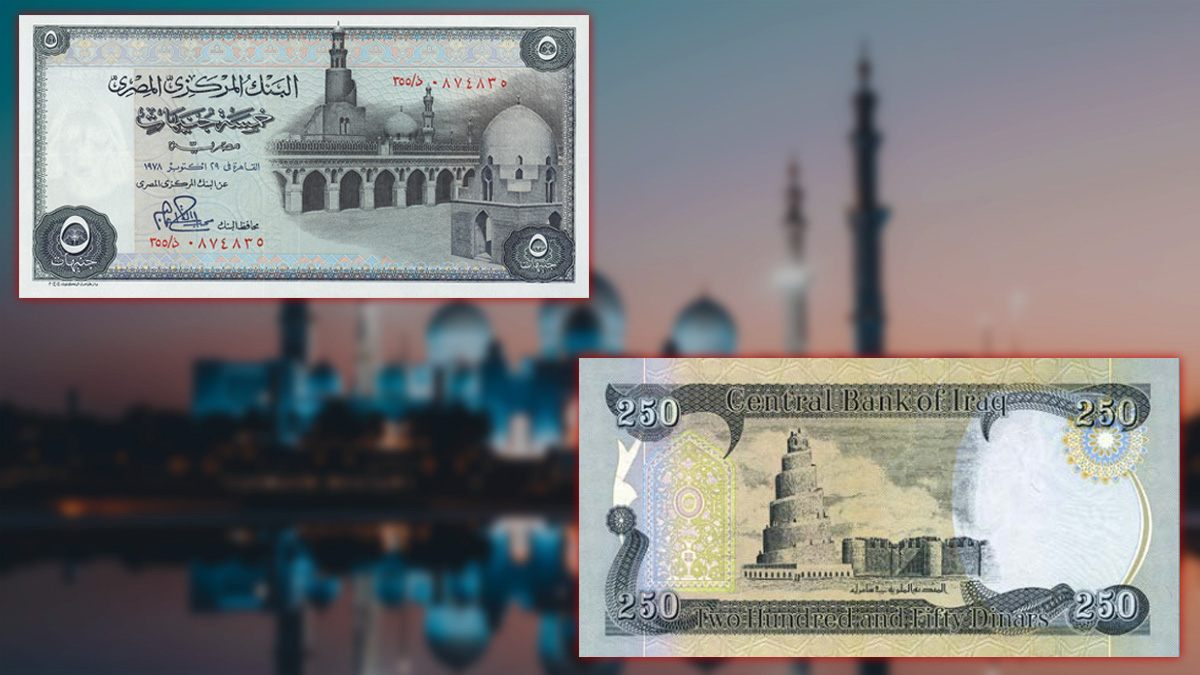 The 250 Iraqi Dinars Banknote depicts the Minatare of Samarra, which is originally the part of the beautiful great mosque of Samarra located in Iraq, on the banks of river Tigris. The mosque was built by the Abbasid Caliph Al-Mutawakkil. It had been the largest mosque in the world during the Abbasid Caliphate.

The mosque was spread over an area of 17 hectares, the building itself covered 38,000 square meters. A total of 80,000 Muslims could worship there at the same time. The Malwiya minaret, an impressive tower, at a height of 52 meters high and 33 meters wide with a spiral ramp, still recalls the past glory of the great mosque of Samarra.

The minaret was constructed in 848–852 of sandstone and is unique among other minarets because of its ascending spiral conical design. The spiral contains stairs reaching to the top. The word “malwiya” translates as “twisted” or “snail shell.” It is an incredible specimen in Mosques Featured on Banknotes series.

Symbol of the Ottoman Empire and Edirne, Selimiye mosque was built by the order of Sultan Selim II between 1569 and 1575 years at the centre of the city, Edirne. It is considered to be the masterwork of the great Ottoman architect Sinan. The mosque lies at the summit of rising ground and dominates the city’s skyline.

The mosque forms an architectural whole, with adjacent complementary buildings, including a school, a library, and a theological college, now housing archaeological and ethnographic museums. Its structure consists of a succession of 18 small domes dominated by a huge central dome. The mosque is famous for its pulpit and tiling. During the Russian invasion of Edirne in 1878, some of the tiles were taken to Russia.

The entire complex was designated a UNESCO World Heritage site in 2011. The mosque was depicted on the reverse of the Turkish 10,000 lira banknotes of 1982-1995. 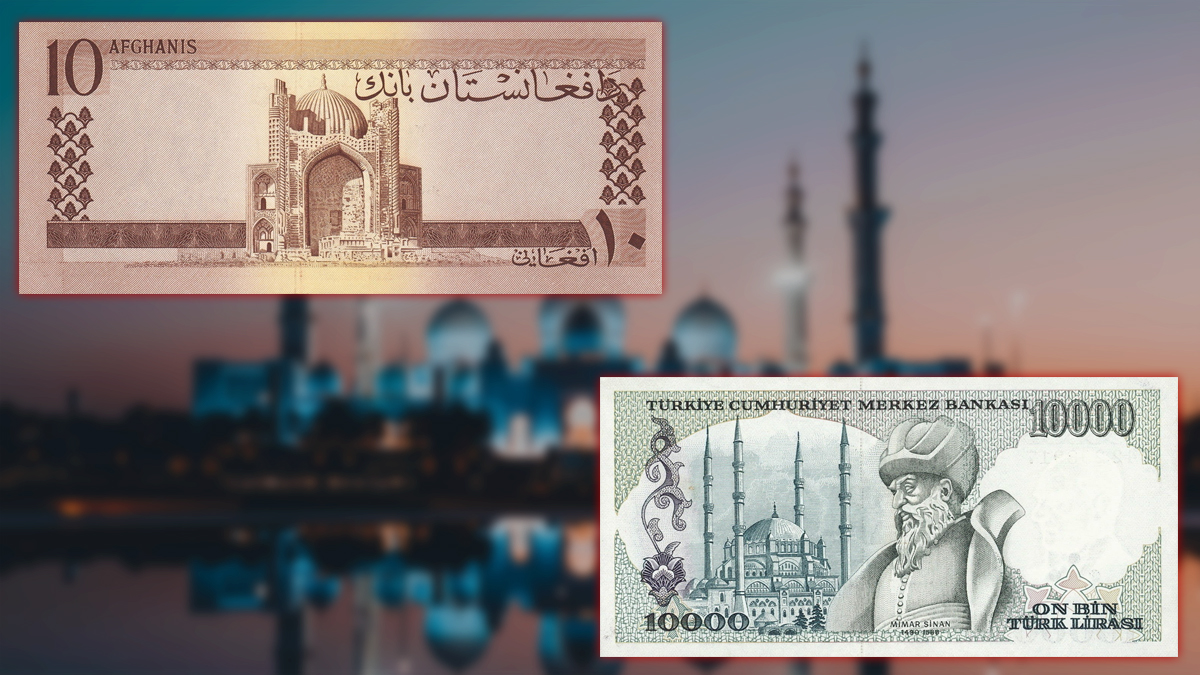 The shrine of Khwaja Abu Nasr Parsa stands at the centre of the Tepe Zargaran in Balkh, Afghanistan. The design is in the Timurid style, with characteristic features such as the fluted dome, tall entryway, corkscrew pilasters, and glazed tiles decorating the exterior.

Khwaja Abu Nasr Parsa was a spiritual leader of the Naqshbandi order and a theological lecturer in Herat. It was built around 1598 and has an octagonal plan of two stories with axial iwans and corner rooms.

A small wooden door leads from the northeast iwan into the dome chamber, crowned by a tall umbrella vault. The four arched niches that animate the walls of the chamber at the ground level are doubled in number at the gallery level with the addition of corner arches supporting the dome’s pendentives. Sixteen windows placed at the rim of the vault illuminate the interior. The dome chamber has a small mihrab niche on the southwest wall, facilitating its use as a prayer hall.

This beautiful mosque printed on a reverse side of banknote issued by Afghanistan in 1961.

The Mosque of Qani Bay is a mosque situated in Cairo, Egypt. The complex is named after Qani Bay al-Sayfi also known as “Al-Rammah” (The Lancer), who was grand master of the horse during the reign of Sultan Ghuri. It was built in 1503-1504/908 AH on a large site on a hill overlooking the hippodrome and the Madrasa-Mosque of Sultan Hasan. The site was chosen since the horse market and stables of the Citadel were originally located just off the square.

The complex has a main facade that takes maximum advantage of the view and at the same time exposes itself to the crowds below. The complex projects along front facade that includes the sabil-kuttab, minaret, trilobed groin-vaulted portal, windows inside large rectangular panels, and a stone dome. The dome is embellished by a handsomely carved arabesque pattern with triangular corner supports.

The interior follows the qa’a plan; the qibla iwan is roofed by a shallow vault on pendentives. The opposite iwan is covered by a cross-vault. The minaret is entirely rectangular. Both minarets of Qanibay are surmounted by a double-headed structure, a departure from the standard bulb carried on eight columns.

The mosque featured on the 200 Egyptian pound banknote because of its architectural and historical value. 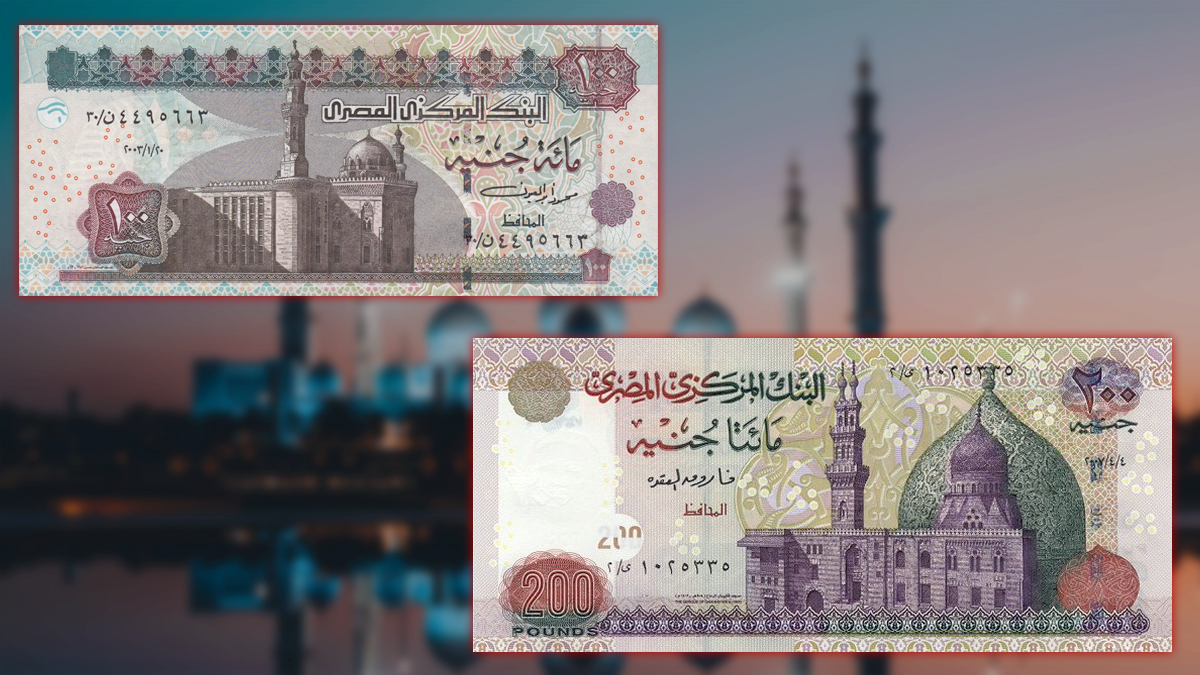 Massive yet elegant, this grand structure is regarded as the finest piece of early Mamluk architecture in Cairo. It was built between 1356 and 1363 by Sultan Hassan who was murdered shortly before the mosque was completed.

Beyond the striking recessed entrance, a dark passage leads into a peaceful square courtyard surrounded by four soaring iwans (vaulted halls). The iwans were dedicated to teaching the four main schools of Sunni Islam. At the rear of the eastern iwan, an especially beautiful mihrab (a niche in a mosque indicating the direction of Mecca) is flanked by stolen Crusader columns. To the right, a bronze door leads to the sultan’s mausoleum.

During construction one of the minarets collapsed and killed some 300 onlookers sparking superstitious rumours that Sultan Hassan’s rule was at an end. They weren’t wrong. Just over a month later, he was murdered by his army commander.

Due to its tremendous height, this mosque soon became a symbol of the culmination of all the architectural power developed throughout a century of Mamluk rule. Here is an image of 100 Pounds banknote of Egypt issued in 2007. The obverse depicts this beautiful piece of architecture in centre-left and Islamic ornamental patterns around with legends.

The world houses a huge number of mosques which are not only beautiful from the outside but also from the inside. From compelling golden domes to halls with kaleidoscopic colours, the beauty and rich history of these sacred places continue to motivate visitors to come and explore them in large numbers from all over the world.

All the countries are no doubt proud of their history and heritage and proudly boast about them on their currency notes. Currency notes and their designs are in itself a topic of great interest and study. This blog covers some of the beautiful aspects of Mosques Featured on Banknotes. Stay tuned for more of us fun and interesting articles!