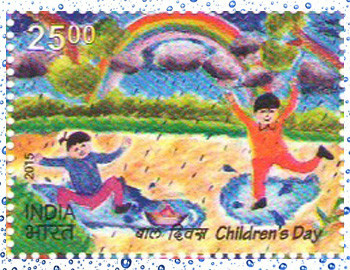 Which type are you? Someone who likes to have his/ her tea on sofa, put their legs up and watch the raindrops trickle down the windows or someone who likes to go out there and get all drenched? Whichever type you are; you can’t not fall in love with rains! We thought of giving the monsoons a Mintage World twist. Starting with the ancient Indian musical raga, Raag malhar

The Sound of Monsoon: Raag Malhar

It is believed that if this Raaga is sung by someone the way it should actually be, the rain Gods get generous. Some legendary singers from the medieval times like Tansen, Baiju Bawra and Baba Ramdas had the power to call in rains when they sang specific forms of raag Malhaar. A beautiful 5 Rs. Stamp was issued by India post that commemorates the monsoon by signifying raag megh malhaar.

Though it’s a bit depressing for the vacations to end, new classmates and new adventures await at the other end. Who can forget those exciting times when shopping for school was one of the coolest things to do in life. The smell of new books and that of the wet soil is deep rooted in our hearts. In 1960 a Children’s Day special stamp was released depicting children learning geography, gazing at a globe, another picture shows two kids playing the famous indoor game called carrom, which most of us indulge in when it’s raining outside.

USA released a stamp depicting an umbrella on a beach. But they say that you’ve not enjoyed the monsoon unless you’ve got drenched. So forget the umbrellas and the raincoats, just head out there and jump into puddles, splash water on your friends and let go of all your worries. A 25 Rs stamp and a 5 Rs. stamp was issued in 2015 on children’s day where kids are enjoying the rains to the fullest. Cute little paper boats make their way to its destiny in small puddles. A rainbow and dark clouds clearly reflects the true spirit of monsoon. These designs were selected through an all India level drawing competition held for kids from around the country. 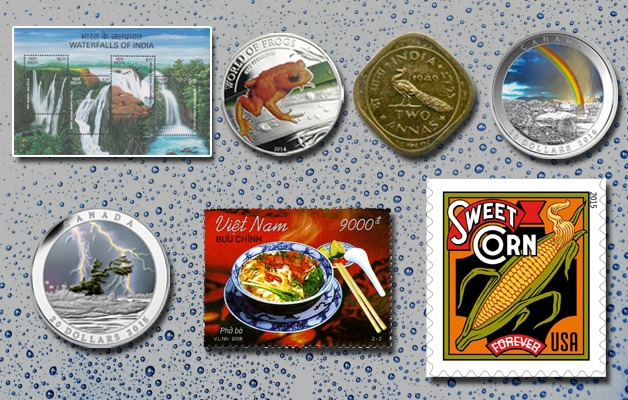 Nature takes on a whole new avatar with lush green pastures that carpet summer-struck dry lands. The cool breeze will bring a smile on your face as you get an assurance that the clouds will bring in rains shortly.

It’s a new start to a new cycle. Rain is absorbed by tree roots and given back to the atmosphere through transpiration. Moisture forms clouds which bring in rain, which again adds to the greenery. It’s the best time to go trekking to one of the nearest waterfalls. A special set of 4 se-tenant stamps, each worth Rs. 5, were issued in 2003 that celebrated the famous waterfalls of India.

Not just stamps, several coins have also been issued by different countries featuring the natural elements related to monsoon. A diamond shaped 2 anna coin that was released in 1949 shows a peacock on its reverse. The peacock is known to spread its magnificent eye-spotted feathers when it senses that the rains are approaching. A colourful silver $2 NZD Palau coin falling under the “World of Frogs” series was issued in 2014 which might remind of the croaks of these jumping jacks who are as excited as you about the rains. A series of 20 Dollar coins were issued by Royal Canadian mint which portrays the different seasons of the country.

One of them depicts a rainbow and the other one, lightening. Do you know how rainbows are formed? Light gets reflected, refracted and depressed when it passes through the water droplets, and a spectrum is formed in the opposite direction of the light source. What about lightening? Lightning is a sudden discharge of electricity when two electrically charged regions of a cloud, a cloud and another cloud, or a cloud and the ground come in contact with each other. Sometimes lightening can be so dangerous that it can burn down houses and trees as well.

Flavours of the season

Hunger starts playing a different game in this special season. You suddenly start craving for things that you might not otherwise. A hot cup of coffee, fried pakodas or fritters, steaming hot soups and not to forget the king of all, the one and only…  corn! There’s nothing like hot barbequed corn sprinkled with some salt and pepper. Since this is a Mintage World tour, we introduce you to some stamps that have depicted, guess what? Food on them! US issued a corn stamp in 2015. Vietnam issued a stamp featuring everyone’s favourite, soup!

So what’s the next thing in plan? Paper boats? Hot tea? Momos? or football maybe!