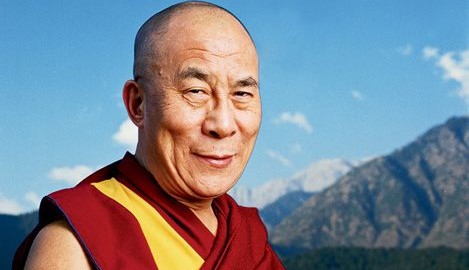 To the Buddhists of Tibet, the 14th Dalai Lama is the epithet of compassion. His followers believe that he has so much love to offer that when he dies, he will be reincarnated so that he can keep working to end suffering. To the Indians he was no less.

The 14th Dalai Lama born on 6th July, 1935 is Tenzin Gyatso. He is both a spiritual and political leader of Tibet.

Once an independent nation, Tibet was overrun by the Chinese army in 1950 where the troops slaughtered thousands of Buddhist monks and destroyed their ancient temples. The 14th Dalai Lama along with his followers was forced to flee. It was here in India that he was offered asylum.

“My mind is filled with Nalanda (an ancient Buddhist Monastery) thoughts. That is an ancient Indian institute. So, therefore I consider you Indians as my Guru (mentor) traditionally, historically.” 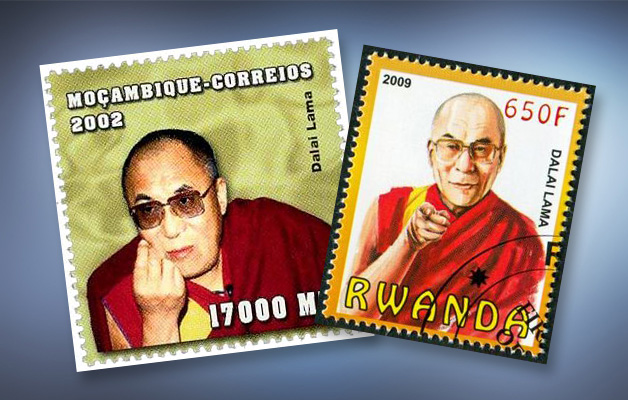 While it is common for a country to honor its great leaders by putting their image on postage stamps and coins, it is rare that country will bestow this honor to the people of other nations. Dalai Lama is one notable exception.

This undated Tibetan Liberty Crown Essai coin was issued in 1966 by the Franklin Mint in New York. The obverse has the image of the 14th Dalai Lama and the reverse depicts the Tibetan emblem showing two snow leopards holding the Dharma Wheel.

Today the Dalai Lama travels the world urging freedom for Tibet and promoting the cause of human rights. These four stamps were issued in 1974 to commemorate the centenary of the Universal Postal Union whose indirect agenda, as clearly seen, was to support Dalai Lama in Tibetan Independence. Colorful and attractive, they depict the Thekchen Choling Temple (top left), a map of independent Tibet (top right), the Potala monastery in Lhasa (bottom right) and the one time Tibetan national flag (bottom left) respectively. All four stamps include a portrait of the 14th Dalai Lama. 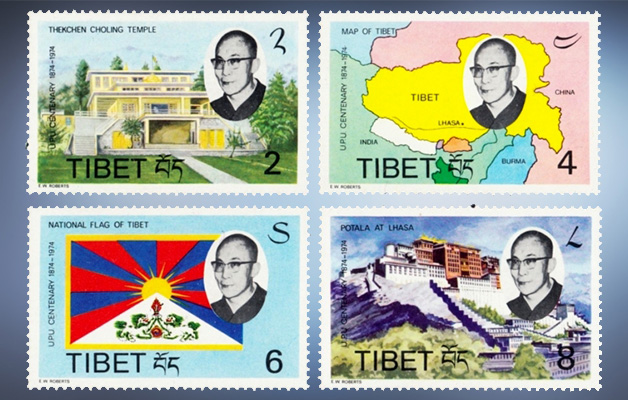 When the 14th Dalai Lama visited Hawaii on 14-15 April, 2012, he was greeted with huge crowds eager to see a small glimpse of him. On this auspicious occasion two-stamps and a mini-sheet were issued. On this First Day Cover is a $6 stamp showing the emblem of Tibet. The red ribbon on it has a Tibetan line written on it, which translates to “Tibetan Government, Garden Palace, victories in all directions.” The Garden Palace was the home of Dalai Lama until the Potala Palace was built. The $11.50 stamp shows the monk in his traditional robes. The second First Day Cover has a $9 mini-sheet showing the spectacular image of Potala Palace. The special pictorial cancellation for this issue depicts the Dharma Wheel symbolizing the endless cycle of birth and death. The eight spokes represent eight-fold Nobel path.  Both the First Day Covers have a brief history printed about Dalai Lama.

It seems that Dalai Lama left his mark on many countries. The Austrian Post Office designed this stamp (left) to mark the 70th birthday on 6th July, 2005 and this (right) 55 Schilling stamp too. Both these stamps were unreleased due to political pressure. 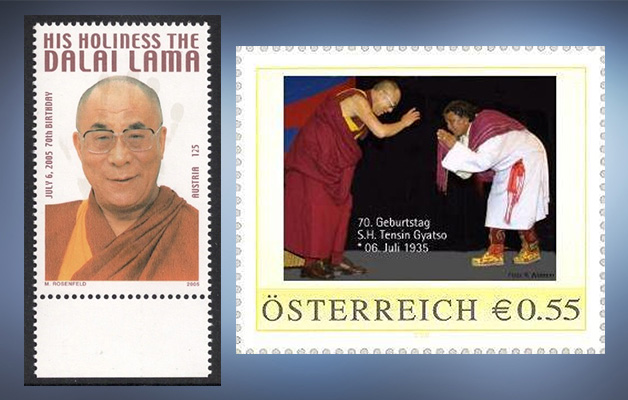 Over the years many small nations like Rwanda, Mozambique, Guyana, Guinea Bissau, and Malawi have also honored him through stamps. (Show images of stamps in background while saying the nation’s name). This courageous man though has been living in exile for over 55 years, has never spoken a negative word about the Chinese publically. He continues to stay Dharmshala, India, and has since then conducted numerous conferences, lectures, and workshops. In 1989, he was awarded the Nobel Prize for Peace. Despite his struggles Dalai Lama’s face is full of laugh lines. When asked to describe himself he replies, “A simple Buddhist Monk- no more no less”

We at Mintage World wish His Holiness a very Happy Birthday!