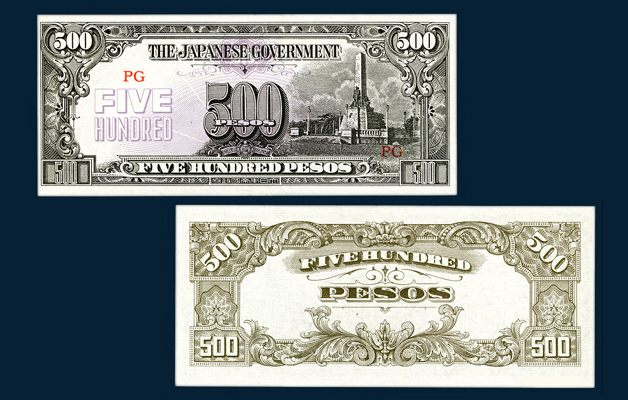 Japanese Foreign Minister Yōsuke Matsuoka introduced the idea of the Greater East Asia Co-Prosperity Sphere In August 1940.  According to this idea, Asian nations would be led by the Japanese with the help of local leaders and free of Western powers.

After Japan conquered Philippines, all hard currency was withdrawn physically at federal as well as individual levels. Locally printed Japanese Invasion Money featuring “The Japanese Government” was circulated. Other local notes called “Mickey Mouse Money” came with the words “promises to pay the bearer on demand”. They were issued in so much excess that they were considered valueless and burned down completely. The Japanese troops also destroyed bank records.

Japan conquered Mandalay in Burma on 21st May 1942 and they forced the British away. Burma was under the Japanese rule till August 1945. During this short period, the Japanese invasion money was issued of denomination 1, 5 and 10 cents and ¼, ½, 1, 5 and 10 Rupees. In 1943, the Japanese assigned Dr. Ba Maw, a popular Burmese ruler, as the head of the puppet government. From that year, paper scrip currency of 1, 5 and 10 Rupee with a 100 Rupee note were issued. The Japanese text read “Government of Great Imperial Japan” and the lower right of the note comprised of the Japanese symbol for the Minister of Finance.

Propaganda 5 rupee banknotes were issued by the U.S. in Burma from 1942 to 1944. The notes were similar in design and colour like the original notes but had a message that read “The Japanese Military Government commanded their troops in Burma to keep the following directives secret. The Military Government is issuing currency notes for your [the Japanese] use in Burma. Spend as much as you like for food and other things, but don’t tell the (Kachin) people the secret of the money. Kachin! The Japanese are making these valueless notes for your use. It is easy to get these notes but very hard to buy food or other things. Avoid these notes or you will be cheated.”

Fake notes were issued by the U.S to destabilize the local economy and to supply guerillas fighting the Japanese. The supply of paper made from plants native to Japan was exhausted and the counterfeiting operation was transferred to Australia. In 1943, five million 10-Peso notes, three million 5-Peso notes, one and a half million 1-Peso notes and five hundred thousand 50 centavo notes were made and released into circulation.

Japanese invasion money was issued in many other countries that were conquered by Japan like, Malaya, Singapore, North Borneo, Sarawak, Brunei, Dutch, East Indies, Oceania etc.