Have you ever wondered why different kinds of money are called what they are? Why a pound is called a pound and a peso called a peso? Here in this blog we will look at the world currencies and their etymological origins. Let’s see a few currencies names from all around the world and their possible meanings and origins.

RUPEE (India, Indonesia, Sri Lanka, Mauritius etc.) – The word Rupee is derived from the Sanskrit ‘rupa’, which means “shape” or from other Sanskrit word ‘rupyakam’, where ‘raupya’ means “silver” and ‘rupyakam’ means “coin made of silver”.

DRACHMA (Greece) – Means “handful” or “handle”, Drachmas were used as a currency in Greece in various periods of its history. It was a monetary unit of modern Greece until the euro was adopted.

FRANC (France, Switzerland, Luxembourg) – First issued in 1360, as a gold coin, Franc gets its name from a Latin inscription “Francorum Rex” meaning “King of the Franks”. Gold francs were issued from 1360-1380 and later silver francs were issued from 1575-1641. Franc finally became a national currency in 1795. It was a monetary unit until the euro was adopted 2002.

PESO (Mexico) – The word peso means “weight”. In old Spanish, it meant a ‘measure’ or ‘weight’ of gold and silver coins. Peso was a Spanish name given to the 8-royal coin or real de a ocho, a large silver coin of the type commonly known as a thaler (dollar) in Europe. It was introduced by Spain in 1497 and then adopted by Mexico and other Latin American countries in the late 19th century. Since its introduction peso is the monetary unit of Argentina, Chile, Colombia, Cuba, the Dominican Republic, Guinea-Bissau, Mexico, the Philippines, and Uruguay.

POUND (English) – Pound Sterling commonly known as the pound is named so for its weight in Sterling’s, – the unit of currency in Medieval England. The first pound coin was issued in 1642. 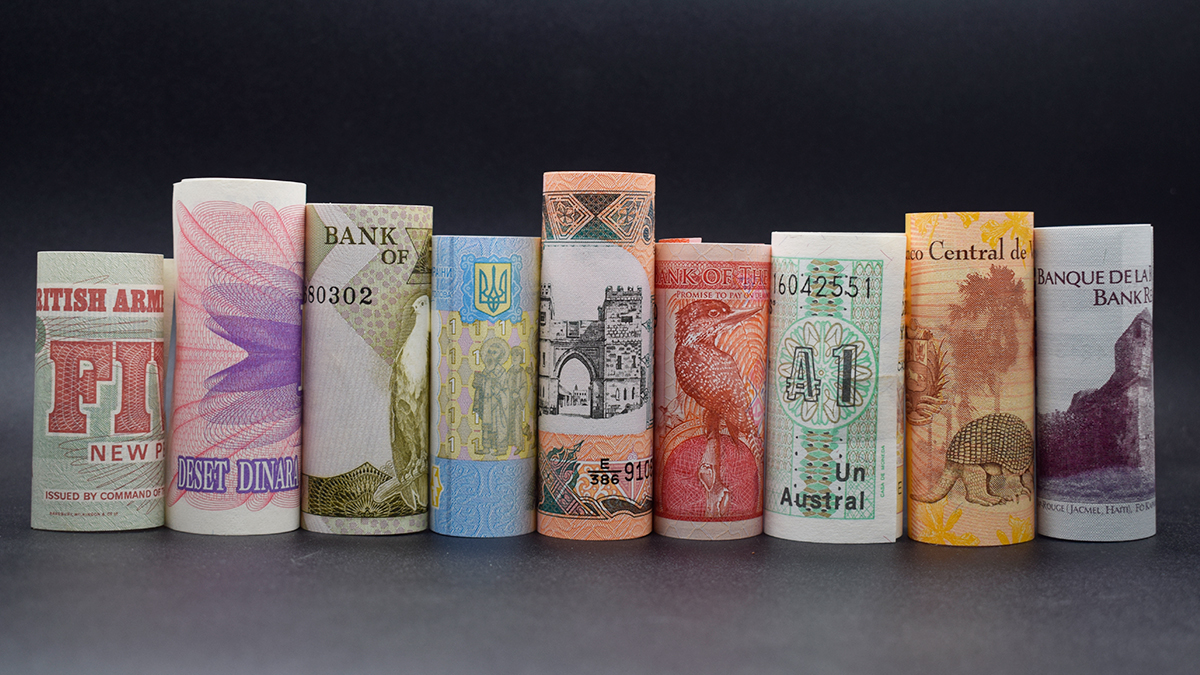 TAKA (Bangladesh): The word “taka” is derived from the Sanskrit “tanka” which was an ancient denomination of silver coin. The word taka in Bangla is also commonly used generically to mean any money, currency, or notes. The “Indian rupee” is also called as “taka” in North India especially in the states of West Bengal and Tripura.

YUAN (China) – Chinese currency is officially called as “Renminbi” and the popular Chinese “Yaun” is its basic unit. ‘Yuan’ means “round” and describes the shape of a coin. (For more information on Renminbi and Yuan click here.)

YEN (Japan): The word Yen is borrowed from the Chinese Yuan, which means “round”, and describes the shape of a coin. It first issued in 1870. Today it is the third most traded currency in the foreign exchange market after the United States dollar and the euro. It also the most widely used reverse currency after the US dollar, the euro and the pound sterling.

RIYAL (Saudi Arabia) – The word riyal borrows its name from the Spanish real, meaning “royal”. The riyal has been the currency of Saudi Arabia even before since the country came into being. Riyal has been one of the primary currencies in the Mediterranean region even during the Ottoman era. Riyal is now the basic monetary unit of Saudi Arabia, Qatar, and Yemen.

ROUBLE (Russia, Belarus etc.) – There are many etymological derivations of the word “rouble”. According to one, the word rouble is derived from a Russian verb “rubit” meaning a “cut-off”, a term that dates back to the days when portions of silver bars were literally cut-off from the bars and used as coins. The rouble was first issued as a silver piece in 1704. 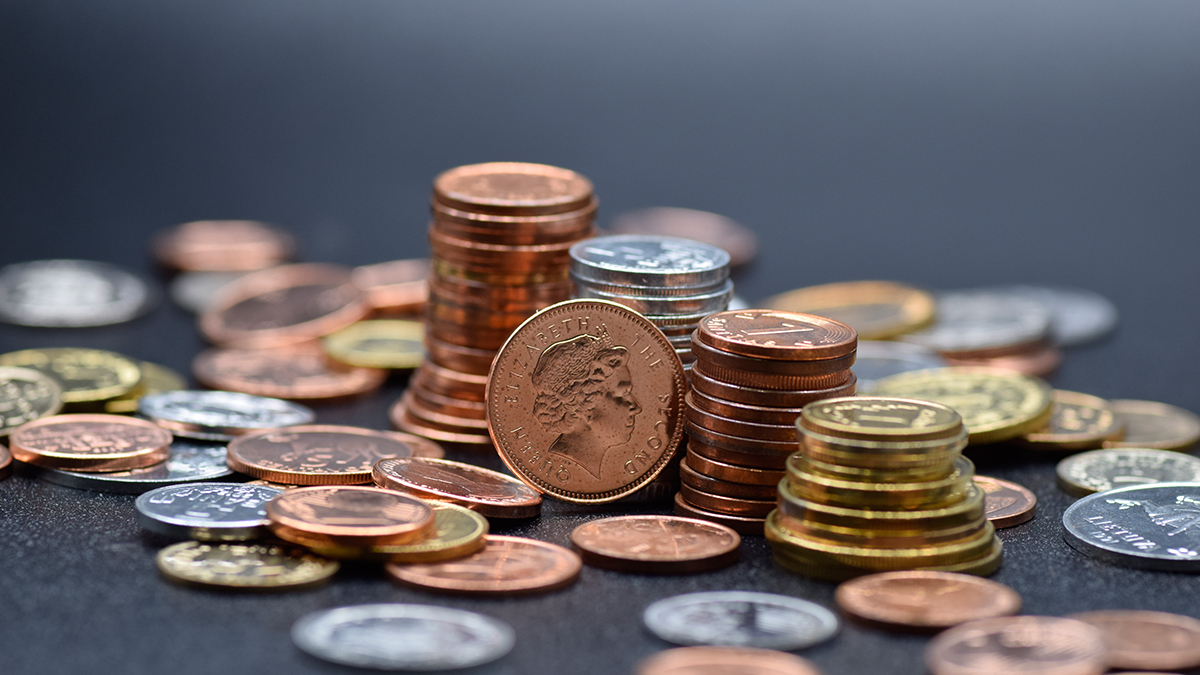 ZLOTY (Poland): “Zloty” is the standard monetary unit of Poland and was also officially used in the Warsaw Duchy. It is divided into 100 “groszy”. Zloty is known to be the monetary unit of Poland from as early as the 1840s. Initially, in the 14th and 15th centuries, the name, Zloty was used for all kinds of foreign gold coins used in Poland, most notably Venetian and Hungarian ducats. The word Zloty literally means “of Gold” or “Golden”.

KRONER (Norway, Denmark, Sweden, Iceland and etc): “Krone” or plural “Kronen” or “Kroner” literally means crown. It is the basic unit of currency in the Scandinavian countries from the 1850s. The word “krone” came to be used for the coins which had the image of the monarch on them. Krone was also the name of a 10-mark gold coin issued by the German Empire. Krone was also the monetary unit of Austria and Hungary.

LIRA (Malta, Turkey, and Italy): “Lira” which literally means “pound” or a “unit of weight”. The Lira is the standard currency of Turkey. It was the official currency of Malta, San Mario, Vatican City, and Italy till euro was adopted. The Turkish Lira is divided into 100 “kurus”. The word finds its origins in the Latin word “Libra”.

MARK (Germany): In old English “Marc” or “Mark” was a unit of weight of a precious metal which was equivalent to about eight ounces, or the marks on metal bars (coins?). The Germanic origin of the word Mark means the “imprinted weight” or “coin”. Some Scandinavian inferences suggest that the word means “to put a numerical price on an object for sale”. In England “Marc” was a unit of the amount and was equivalent to 10 pence. Scottish “merc” was a silver coin. The “Deutschmark” was the unit of currency in Germany divided into 100 pfennigs which replaced by the euro in 2002. Today the Mark is the monetary unit of Bosnia and Herzegovina.

RINGGIT (Malaysia): The Ringgit is the monetary unit of Malaysia which equal to 100 sen. It means ‘jagged’ in Malay and was originally used to refer to the serrated edges of silver Spanish dollars which circulated widely in the area during the 16th and 17th-century Portuguese colonial era. The word also means “milling money” or a dollar. The Malay names ringgit and sen were officially adopted as the sole official names in August 1975.

It’s better and wiser to know about your money than to just spend it. Well because as they say “A fool and his money are soon parted”.

For this and much more keep visiting our site!