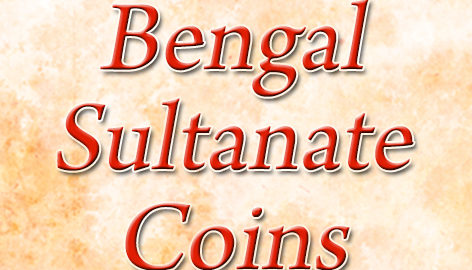 At the end of 12th Century, Muhammad Bin Sam successfully captured Delhi Sultanate; he placed Qutb-ud-Din Aibak as viceroy of Delhi Sultanate and asked Muhammad Bakhtiyar  Khalji- his military general to lead his army eastward-to the province of Bihar and Bengal. Later, the western part of Bengal; both the city and the district of Gaur (Lakhnauti) was captured and the government was set up in the name of Ghurid Sultanate.

In this way, Muhammad Bakhtiyar Khalji became the first governor of Bengal Sultanate. Later till the year 1338, Bengal was ruled on the behalf of Delhi Sultans by the official appointed by them. During this period, around 25 governors were appointed by Delhi Sultanate and six of them issued coins in their name. Hence, these six governors had contributed their part towards coins of Bengal Sultanate. The names of these six governors who issued coins in their names are:-

The coins of Bengal Sultanate issued by all these six governors were mostly in Silver metal, but, some very scares gold coins of Shams Al-Din Firuz Shah can also be found. All the coins issued by first two governors bear the name and title of the king on the obverse side and Kalima and date on the reverse side of the coin. The coins issued by subsequent rulers substituted the Kalima with the name of last Kalifa of Baghdad, Al-Mustasim. 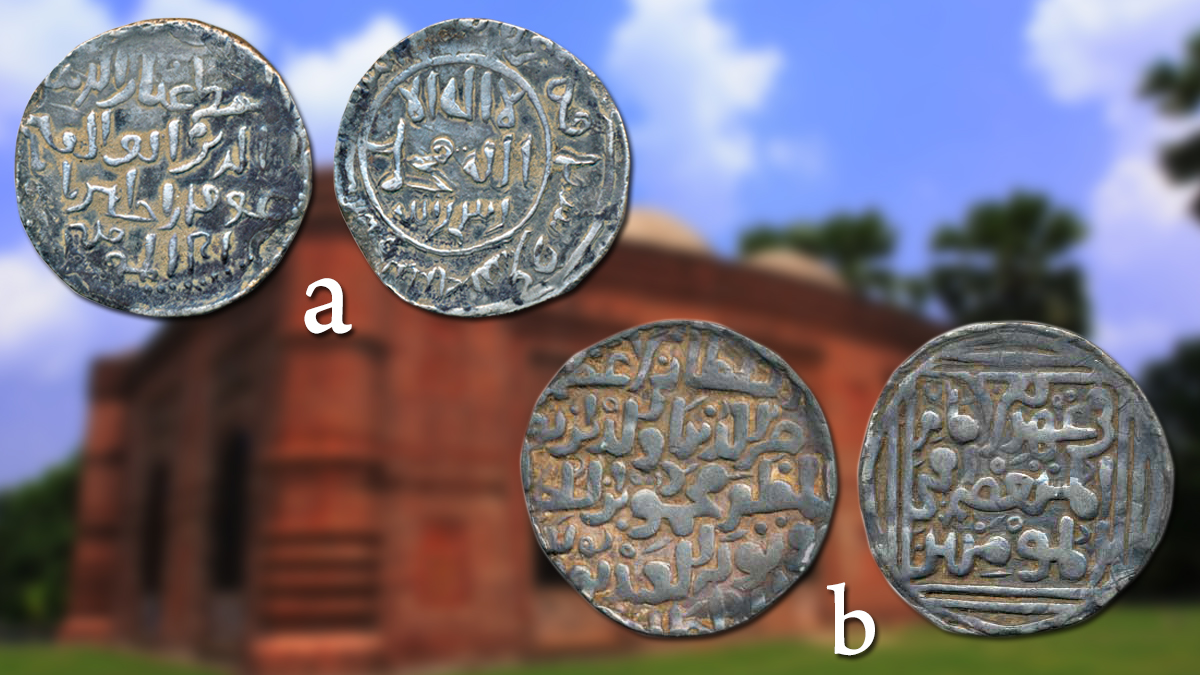 Ghiyas Al-Din Iwaz ruled Bengal for two times in Indian History, his first reign begins in the year 1208 CE; when he had a conflict with Khalji Maliks, and who later assumed the throne of Bengal Sultanate. The Khilji Malik ruled Bengal for two years till 1210 CE until he was overthrown by Ali Mardan Khalji.

After the death of Ali Mardan Khalji in the year 1212 CE, Ghiyas Al Iwaz again got the hold of Bengal Sultanate for the second time and at this time he ruled Bengal Sultanate for almost 15 years until 1227 CE. In these 15 years of his reign, Ghiyas Al-Din Iwaz tried to maintain peace in Bengal. He also transferred his capital from Devkot to Gaur and had tried to prepare a powerful navy. He carried out invasions into neighbouring regions and made Vanga (Easter Bengal), Kamarupa (Assam), Tirhut (Northern Bihar) and Utkala (Northern Orissa) his tributary states. The coins of this Bengal Sultanate were mostly in silver and he coins he issued are known as Tanka.

The coin depicted in the image above (a) is a coin of Ghiyas Al-Din Iwaz. The legends of the coin are as follows:-

In the Beginning, Mughith Al-Din Yuzbak issued coins with the title “Kunya Abul Fath” (father of victory). He issued these coins from the mint Nudiya; which is about 50 miles away to the north of present-day Calcutta. Later, he started issuing all his coins from the mint written as Laknu; it is unclear whether this is Lakhnauti or Laknur.

The coin depicted in the image above (b) is coin of Mughith Al-Din Yuzbak. The legend of the coins is:- 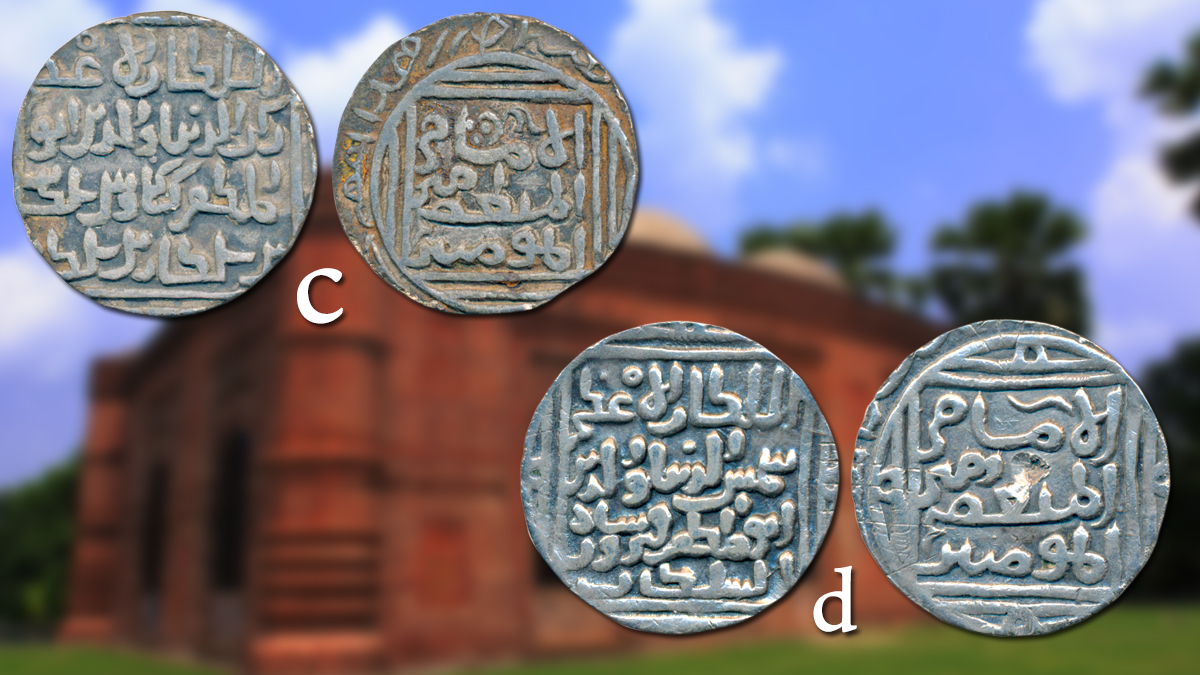 The coin depicted in the image above (c) is a coin of Rukn Al-Din Kaikaus;the legends of the coin are as follows:-

Shams Al-Din Firuz Shah sat on the throne of Bengal with the title ‘Al-Sultan Al-Azam Shams Al-Duniya wa’l Al-Din Abu Al-Muzaffar Firuz Shah Al-Sultan’ and also invoked the names of Abbasid Caliph Mustasim Billah on his coins. The coins of this Bengal sultan are found in both gold and silver.

The coin depicted in the image above (d) is a coin of Shams Al-Din Firuz Shah. The legends of the coin are as follows:- 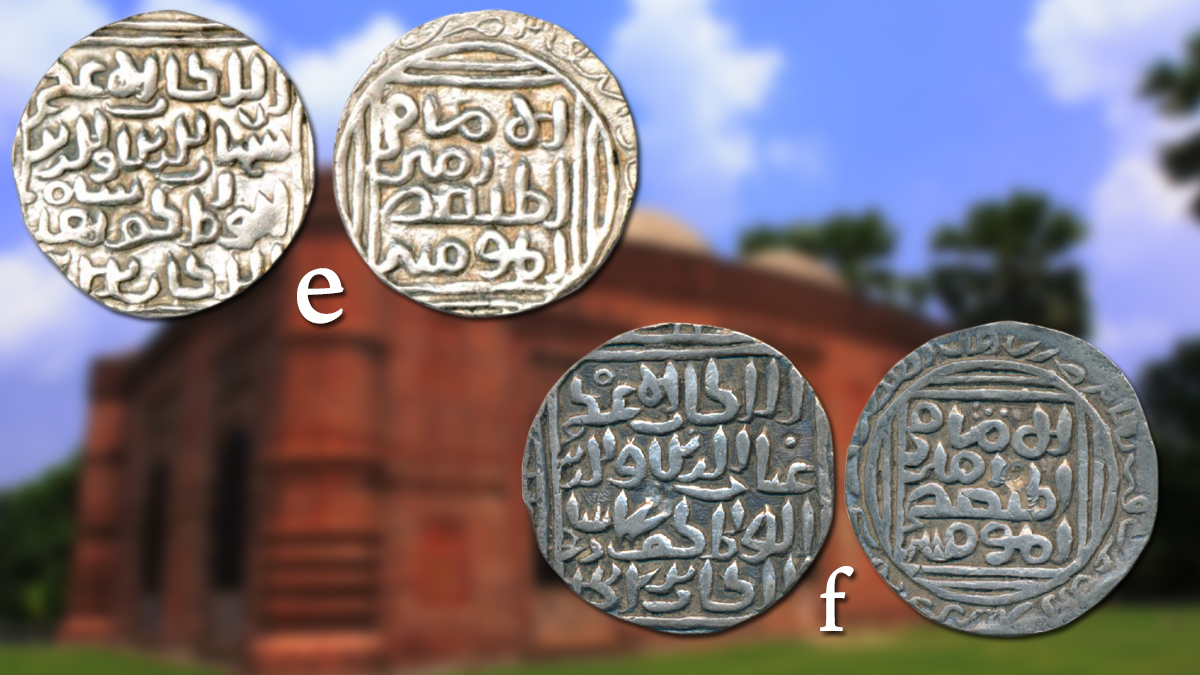 Shihab Al-Din Bughda ruled the Bengal Sultanate for one year. He sat on the throne of Bengal Sultanate in the year 1317 CE and ruled it till 1318 CE. Coins issued by him are scarce and it is very difficult to find them with a clear mint and date inscribed. He issued silver tanka in both Lakhnauti and Sunargaon.

The coin depicted in the image above (e) is a coin of Shihab Al-Din Bughda Shah. The legends of the coin are as follows:-

The coin depicted in the image above (f) is a coin of Ghiyath Al-Din Bahadur. The legends of the coin are as follows:-