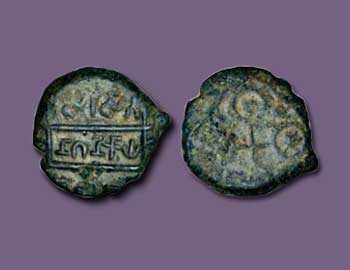 In ancient India women held a higher position in the society, ancient texts are full of such references to justify the contribution of women. The earliest evidence of woman’s position in the society is seen through the findings of the mother goddess and fertility cult worship from the Indus valley civilization. Yet, seldom there will be any reference to women on Indian coins as a sovereign compared to men.

Still, Indian coinage gives an ample amount of example of women empowerment as a joint or an independent ruler on coinage. There are many queens, whose names were inscribed on coins from Queen Naganika, Sungandha Devi to Chennabahira Devi and Nurjana these legendary women have left their mark on history. It will be a thrilling experience to analyse this part of Indian history through metal currency. 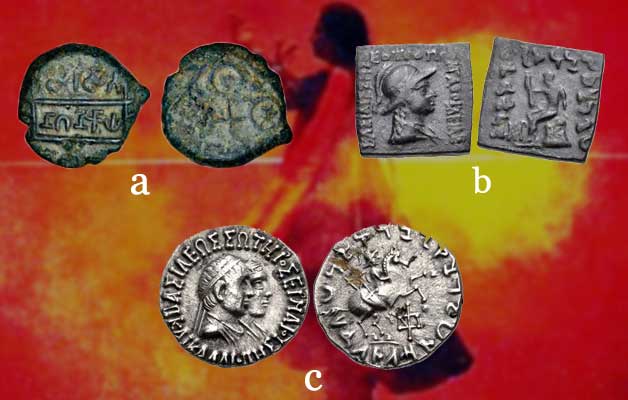 In 1st Century BC, there was a phenomenal queen called Naganika, she is known to be the first Indian queen to issue coins in her name. Queen Naganika was the wife of Satakari I who was a renowned ruler of Satavahana dynasty. She is probably the first person in history to have her name associated with a king on Indian coins. The evidence of such coin is seen in the inscription of Nanaghat near Junnar, it also records different sacrifices celebrated with donation done through coins (Karsapanas).  The Stavahana dynasty had good trade relations with the Roman Empire, thus base metal for local currency was supplied by the Romans. The inscription also mentions a guild of barriers, it states that King Satakarni had ordered to melt down the silver Roman coin and minted the Kharapanas in Junnar. The silver coins of King Satakarni I and queen Naganika were issued on the occasion of Asvamedha sacrifice.

In the above-shown image, the alloyed copper coin (image a) of Queen Naganika is shown. On the obverse side of this coin, a Brahmi legend is inscribed, which reads ‘Naganikaya’ vertically on a pillar railing with another legend ‘SiriSata’ in Brahmi on the right side.

One another speciality of the Satavahana Kings is that they used their mother’s name (Matriarchal system) in their initials for e.g.: Gotamiputra Satakari, Vasisthiputra Satakarni, Kochiputra Satakari. These names are found on both coins and inscription, like Kochi, Vasisthi, Gotami are the crowned queens of this dynasty. This practice also shows the status of women during that time.

The first women to rule the Hellenistic Kingdom is queen Agathokleia, she is popularly known as Agathokleia Theotropos. Queen Agathokleia was an Indo-Greek queen and ruled northern India around 2nd century BC as regent for her son king Strato I.

Queen Agathokleia issued gold, silver, copper and bronze coins during her reign. On coins Agathokleia seems to associate herself with Athena; the Goddess of war, one fine example is the above-shown copper coin (image b). Most of her coins are the joint issues with her son Strato I. In the early issues of the Queen Agathokleia, her son king Strato I’s portrait is not depicted; he was shown in standing position and holding spear and shield in his both arms. Later on, the conjoined busts of both Agathokelia and Strato I were circulated.

Another Indo-Greek queen is Calliope or Kalliope. She was the wife of a Eucratid dynasty King Hermaeus. He ruled the Paropamisade in the Hindu-Kush region around 90 BC. Queen Calliope appears on the coinage of her husband King Hermaeus. A silver drachma (image c) depicts the conjoined bust of both king and queen, this coin was circulated around 90 to 70 BC.

From this example, one can see the power queen held over the administration of the state. This silver coin stated her power as the joint sovereign over the kingdom.

The first known woman ruler of Kashmir, Queen Sugandhadevi left a benchmark for many to be queens of Kashmir. She was from the Utapala dynasty and her reign lasted for a decade from 905 to 907 CE, first as a regent and later on a sole ruler for three years. According to Rajataragini she was overthrown and executed by her courtiers.

The coins issued by her were inscribed with her name as ‘Sri Sugandhadeva’ instead of Devi. Similar coin (image b) is shown in the above image with legend Sri Sugandhadeva and goddess Lakshmi (Ardochsho) in the lallitasana.

The Queen of the Chauhan dynasty, Somala Devi also known as Somalekha Devi. Her name appeared on coins as the joint ruler with her husband King Ayaja Raja and later as sole ruler.

In the above-shown picture, the copper coin (image a) of queen Somalekha bore the inscription ‘Somla Devi’ with an illustration of a crude horseman. There are many different and unique type of copper coinage of queen on which a man is illustrated with elephant motif. She also issued coins in silver.

Even after her death, Somala Devi appeared on the later coinage. These coins depict a highly ornamented horseman and elephant. 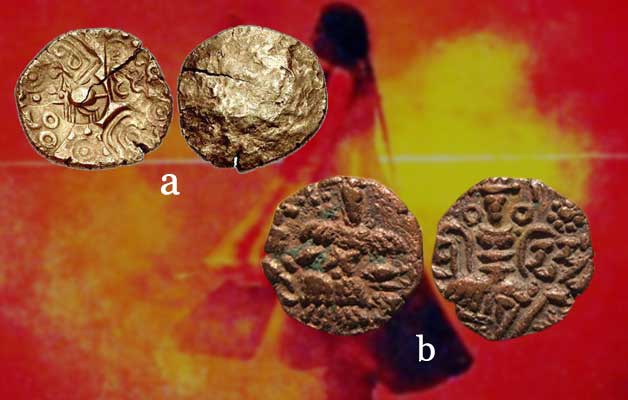 The Kakatiya Queen of Warangal, Rudramadevi ruled the southern Deccan around 1262 to 1289 CE.  She acquired the title of her father King Ganapatideva after her victory over the Yadava king of Devagiri. Rudramadevi was succeeded by her grandson king Pratapadeva, thus we can say, the Kakatiya throne was passed on twice through a female ruler.

Rudramadevi issued gold pagoda and Gadyana coins during her reign, the gold pagoda (image a) in the above-shown picture was issued by Queen Rudramadevi. This coin depicts Boar in the centre with Kannada legend ‘Raaya Gaja Kesari’ meaning ‘Lion to the Elephant like enemies’.

It is also interesting to know that all the gold pagoda and gadyana coins of Kakaitya dynasty that consist the Boar (Varaha) symbol and epithet ending with ‘Kesari’ were called Kesari Vahara.

The wisest and powerful queen of Kashmir, Didda Rani’s reign is the representation of the women power in India. In Rajatarangini, she is portrayed as a ruthless, immoral and evil ruler, but this literature source was documented after a century of her reign. She was an intelligent and influential queen of Parvagupta dynasty. Her first illustration on coin came as a joint ruler with her husband King Kshemagupta as ‘Di (dda) Kshemagupta Deva’.

After the death of her husband she also acted as a regent queen in her son’s name Abhimanyudeva. After her son’s death Didda Rani became regent for her grandson Bhimagupta but due to mysterious circumstance even he died. At this point, she ascended the throne and issued coins in her names as ‘Sri Didda’. The bronze coin (image b) with a legend in Sharada script ’Sri Didda’ in its reverse side is a fine example of her coinage. It also illustrated goddess Lakshmi (Ardochsho) seated in lalitasana. Didda Rani ruled for 22 years and was succeeded by her brother’s son king Vigraharaja. 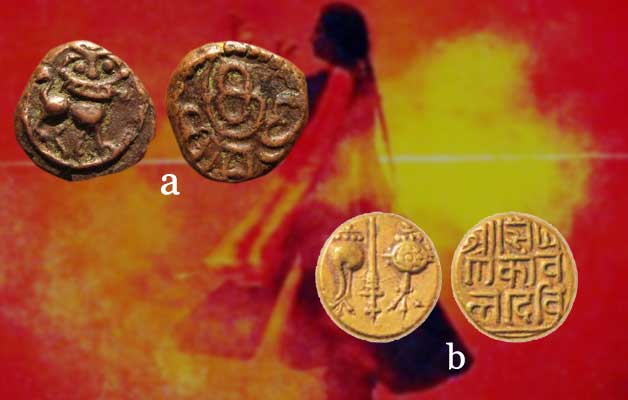 Rani Mangammal, the queen of the Chokkanatha Nayaka of Madurai. She is known for her contribution to the development of infrastructure. She ruled as a regent for her grandson Vijayaranga Chokkanatha. Her diplomacy helped a great deal maintaining good relation with the neighbouring powers. Mangammal established a state policy which was liberal towards all the religious practices and beliefs. She is also famous as the road maker and ruled from 1689 to 1704 CE.

Not much is known about this Yadava Queen of Devagiri, Kamwaladevi / Kamla Devi but she for sure played an important role in the administration and political aspect of the kingdom. The fine evidence of this is the gold gadyana shown in the above image. This coin (image b) is a joint issue of Queen Kamwaladevi / Kamla Devi and Singhana III, the last ruler of the dynasty who was defeated by King Alauddin Khalji.

This 3.84 grams coin features a royal emblem composed of ornament of shankha and chakra symbol flanking a sword. The reverse of this coin depicts a legend inscribed in three lines which reads ‘Shri Singhana Kamwala Devi’.

All the above-mentioned queens in some way or another gave an immeasurable contribution to the development and protection of their kingdom. One cannot deny that Indian women played a key role in establishing the fundamentals of the great dynasties and civilizations in India. These women on Indian coins played an important role to improve the thoughts of Patriarchal society. The best example is the wife of King Chandragupta II, queen Dhruvadevi an amazing woman, her intelligence and bravery were legendary among her subject. Her story goes as that she was married to Chandragupta’s brother Ramagupta but as he was a weak ruler and agreed to hand her over to the enemy king to save his own life. Hence, as the knowledgeable women, as she was, she quotes, the sentence of Arathashatra that a man who is dead, unfit, cowards, left for an unknown destination or put his wife in danger than the women can leave her husband and remarry. The name of this brave queen of Gupta Empire was beautifully depicted on the lead coins issued by King Chandragupta II as a joint issue.

These queens truly justify the quote ‘the hand that rocks the cradle rules the world’. As equal to the counterpart of their time, these legendary women proved that they were an able and strong leader for their subjects. There are more queens who made their presence know in history, it will be a fascinating journey to learn more about them.

Till then, stay in touch with us and wait for the next journey to commence to learn more about the women on Indian coins who turned the tide of time in their favour.

QUEENS AND COINS OF INDIA-Jayanti Rath

View all posts by Team Mintage World →
One thought on “Affirmation of women empowerment: Women on Indian coins-I”