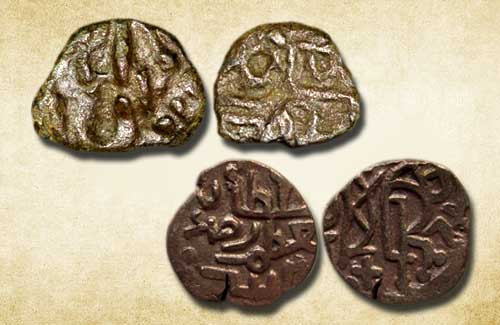 It’s International Women’s Week and Mintage World celebrates some of the most powerful women in Indian and Sri Lankan history who were featured on ancient coins. These women played a vital role in politics and governed their empires successfully.

As per inscriptions found in one of the caves in Naneghat, the queen is portrayed as a daughter, a wife, and a mother. She also performed or was responsible for twenty sacrifices including initiation ceremonies, vows, the Rajasuya and Asvamedha, at a time when women were not allowed to listen to the Vedas.

According to some experts, the queen must have performed those sacrifices along with her husband, the Satavahana King Sri Satakarni. Another research predicts that she performed all the sacrifices as a wife, except the last three which she performed through a priest. Historians believe that women who ruled as regents or ruled without their husband were given the rights to perform these sacrifices. Since, these sacrifices were a costly affair, not anyone else but Naganika could have afforded to conduct them. This can be further clarified as she is the only woman depicted on Satavahana coins.

The inscription on the caves bore details of the sacrifice and the donations paid. They were written not in Sanskrit, but in Prakrit, so that common people could easily comprehend it.

Both Ayaja Raja and his queen Somalekha issued Coins of Chauhan Dynasty. They were billon drammas, identical to the Lakshmi-type gold coins, but were struck on narrower, thicker planchets that suited the quality of the metal.

The reverse of these copper coins bore a crude horseman and the queen's name, 'Somala Devi', on the obverse. A unique type of Somala Devi copper coinage features a man and elephant motif, and was probably a design experiment that did not last for too long. It could also have been an attempt to launch a new set of coins by masking it in the mantle of old and accepted coinage.

Even after the death of the queen, Somala Devi coinage continued. Later issues in fact had highly stylised horseman designs and the legend named 'sri sonmala devi'. This legend not only indicates that these coins were minted even after the lifetime of Somalekha Devi, but also reinstates the power or popularity of this great queen.

From 958 AD to 1003 AD, Didda ruled Kashmir as a Regent for her son and various grandsons. She finally was chosen as the sole ruler in her own right. After marrying the king of Kashmir, Ksemagupta, the kingdom of Lohara and her husband’s empire united. When Ksemagupta succumbed to fever in 958, Abhimanyu II, his little son was entitled as the king. Didda acted as Regent and slowly rose in power to become a sole empress. Didda displayed her expertise in sate affairs even before she became a Regent which can be interpreted by the coins which bore both her portrait along with King Ksemagupta. She first got rid of her corrupt ministers who later on turned into rebels. She ruthlessly executed not only the rebels but also their families. After the death of Abhimanyu in 972, Nandigupta, still a young child himself, was chosen as the King, who was opposed by the Dāmaras, who were feudatory landlords.

Queen Lilavati was in power during three time periods, 1197?1200, 1209?10, and 1211?12 with the backing of several generals after her husband Parakramabahu I’s death. She was the second woman in Sri Lankan history to rule as a queen of the Polonnaruwa Kingdom.

Lilavati's brother Manabharana of Ruhuna and the Queen Mother, Sugala had a strained relationship with Parakramabahu. Manabharana fought against Parakramabahu on several occasions, whilst Sugala had an evil intent by nature. The country had many internal tiffs yet had a prosperous history, and the Queen on the other hand dedicated her time in the development of literature, music, drama and art.

A silver coin of Queen Lilavati in the collection of lowsley was considered suspicious by HW Codrington in 1924. Few more coins have surfaced since then. Many gold plated Lilavati coins are found among the Copper pieces. Numismatists have assigned three types of Lilavati coins found to the three periods of her reign.

Raziya Al-Din, popularly known as Raziya Sultan, was nominated as heir apparent by Iltutmish before his death. Raziya was the first female ruler of the Muslim world. After the death of her father, the Council of Forty ignored the wishes of the previous Sultan and raised his son Ruknuddin Feroze to the throne. Feroze’s mother, Shah Turkan, ruled on his behalf. Seven months after his ascension to the throne, Ruknuddin and Shah Turkan were assasinated and Raziya ascended the throne of Delhi. She ruled for a short span of four years. Her term was met with resentment from the nobility which took objection to being ruled by a woman. To add to their resentment, Raziya cast aside the traditional female attire and held court with her face unveiled. Her appointment of a non-Turk as the Superintendent of the Stables drove the Council and many others to rebel against her. She was defeated in battle by Malik Altunia, the Governor of Bhatinda, who held her captive. To escape death, Raziya agreed to marry Altunia, and together they attempted to lay a fresh claim to the throne of Delhi. However, they were defeated in battle and Raziya was killed in a forest by bandits while in flight.

Razia was succeeded by three kings in succession, none of which were competent enough to consolidate their power. Muizuddin Bahram, Alauddin Masud and Nasiruddin Mahmud were finally succeeded by Ghiyasuddin Balban who finally managed to establish order to the territories of the Delhi Sultanate.